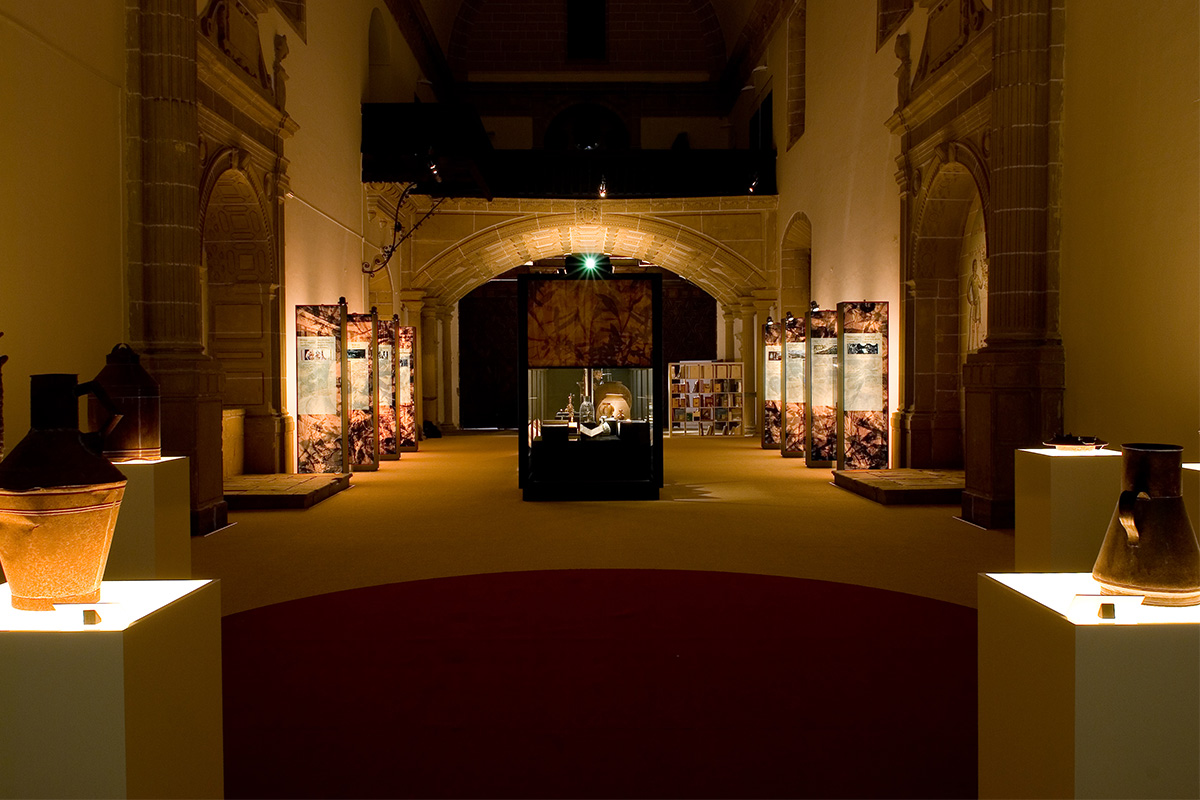 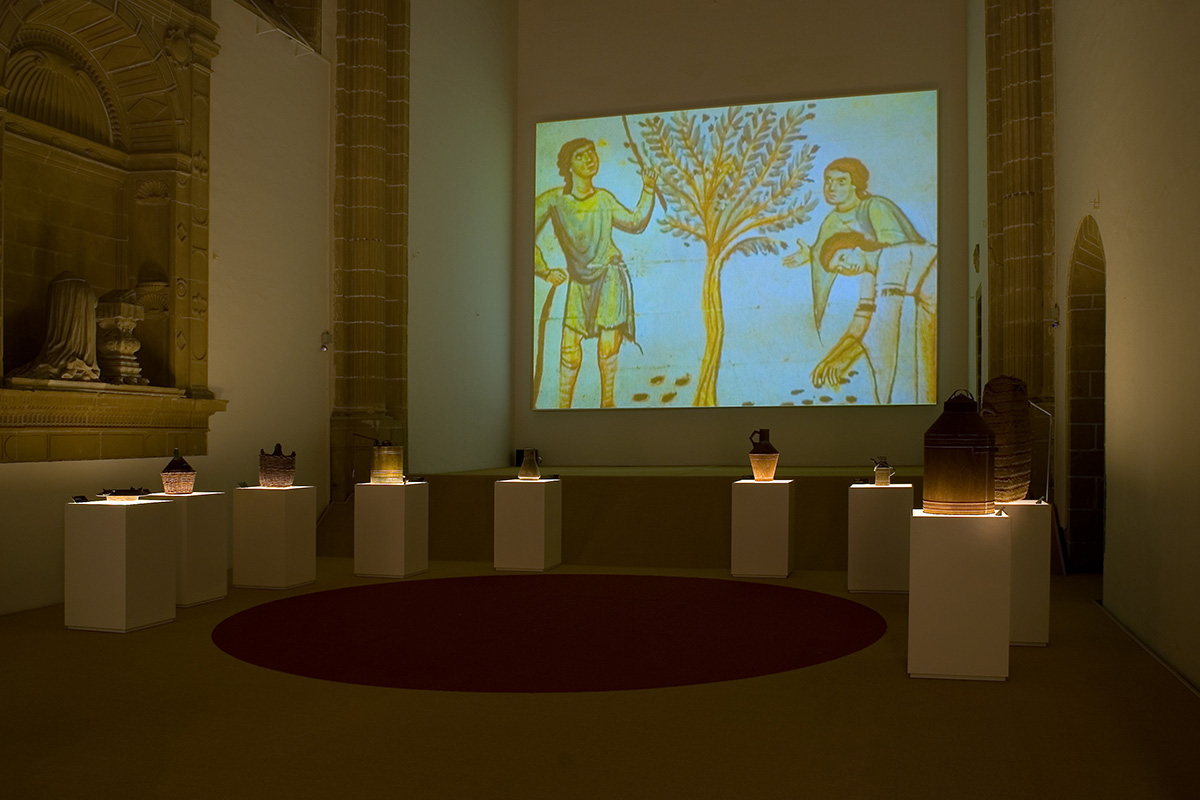 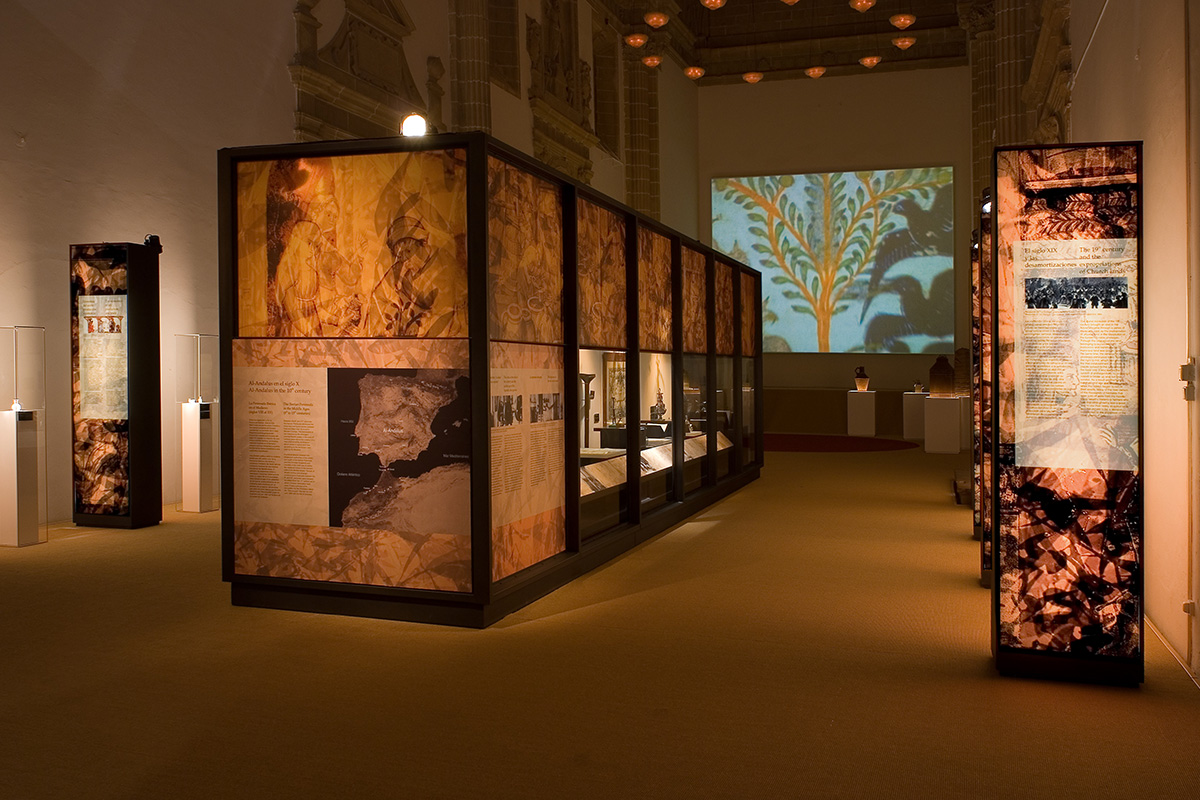 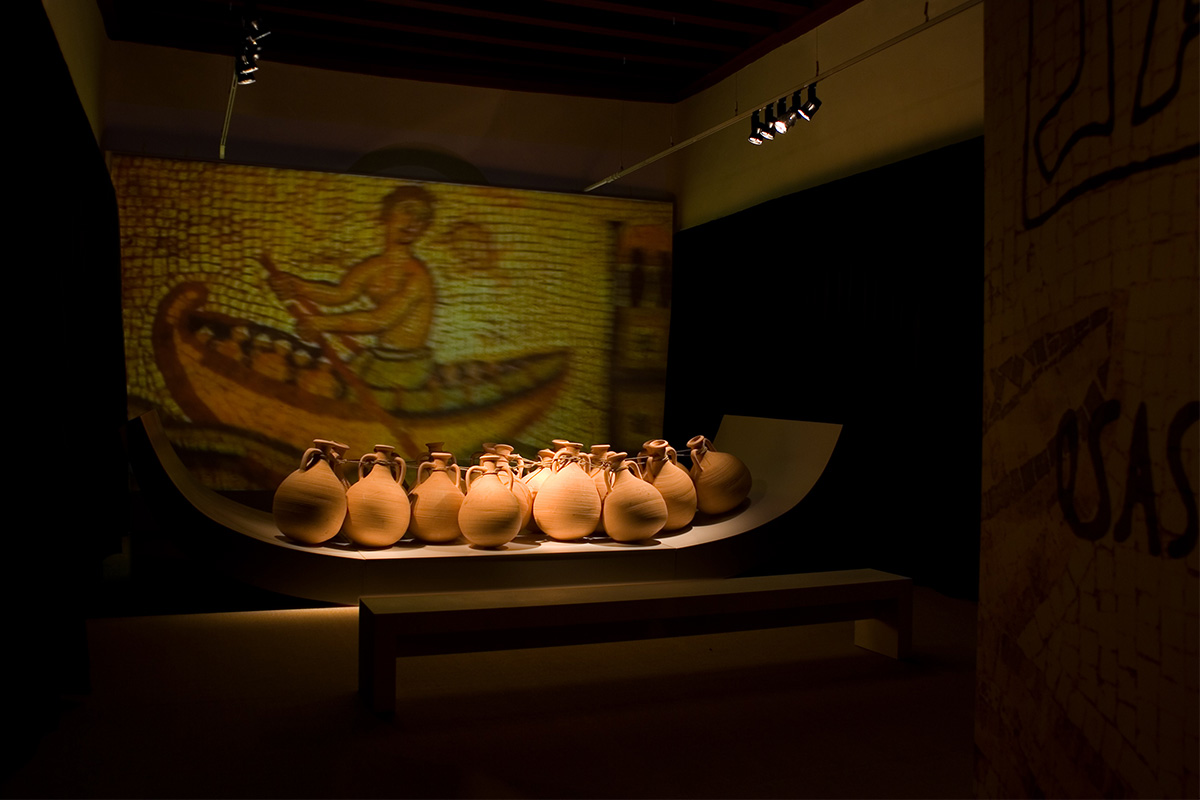 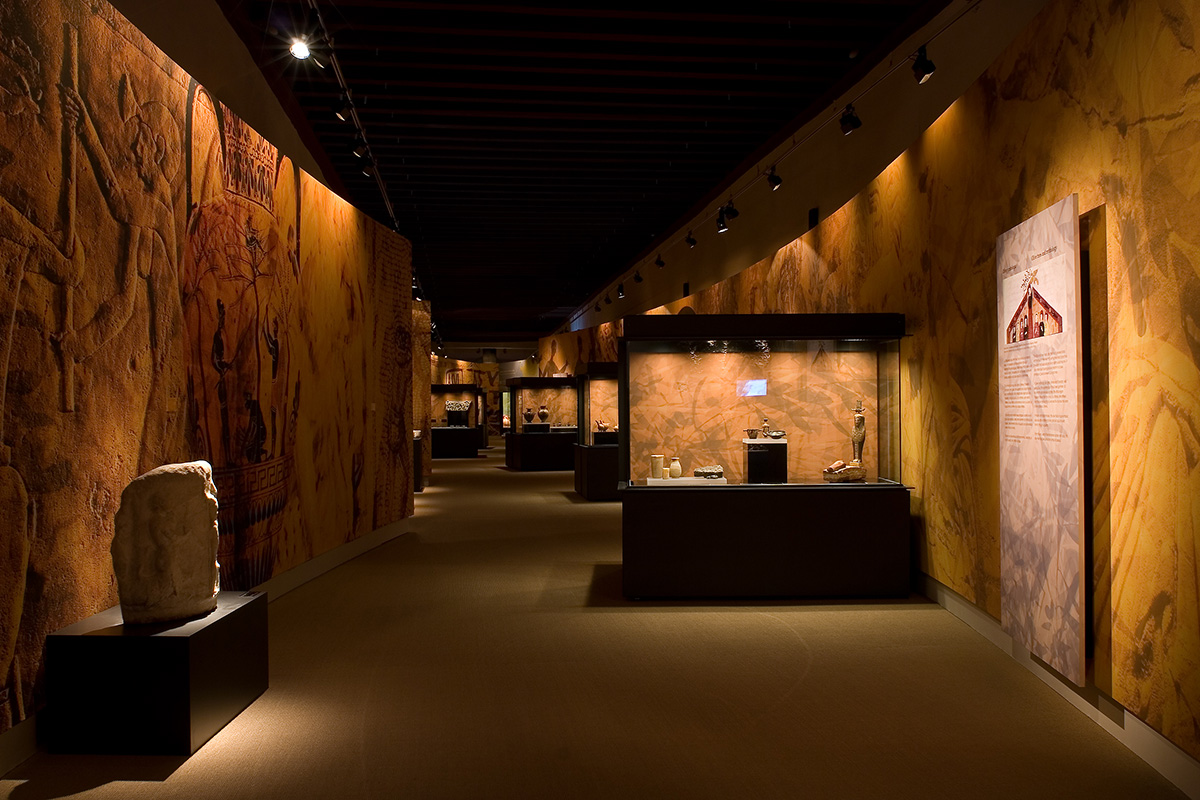 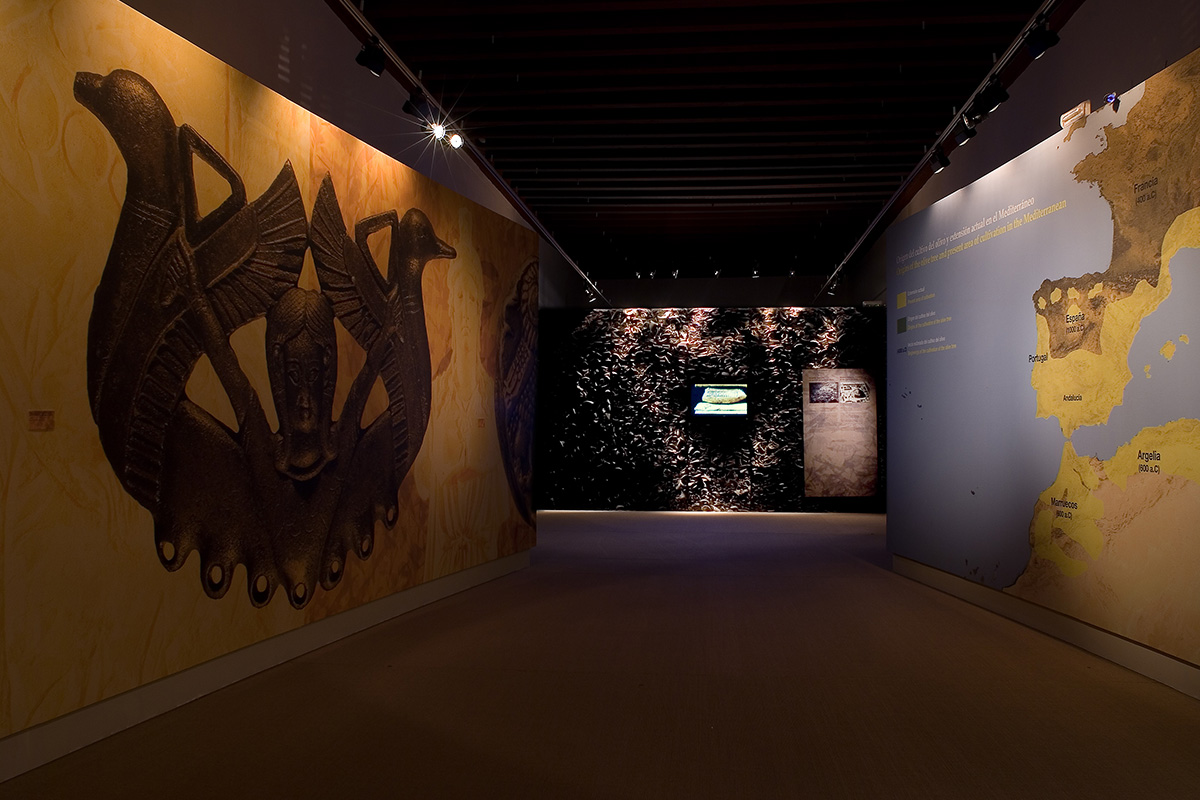 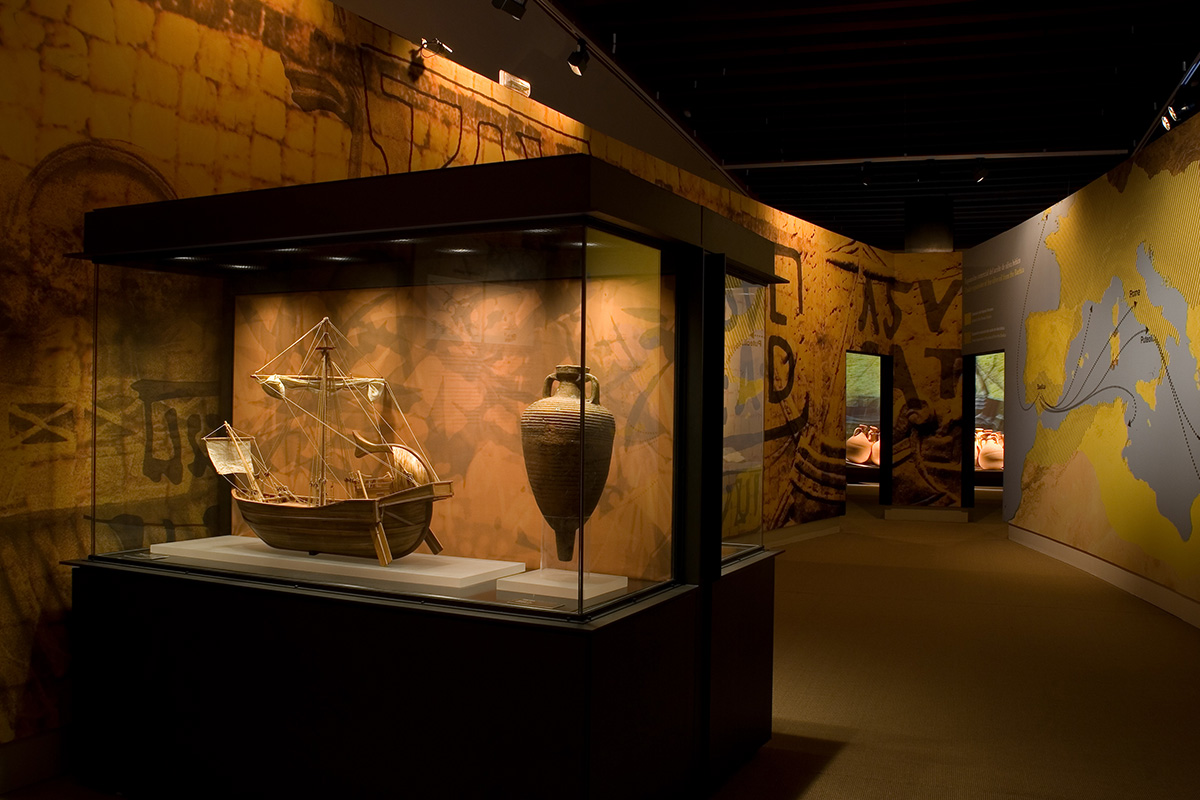 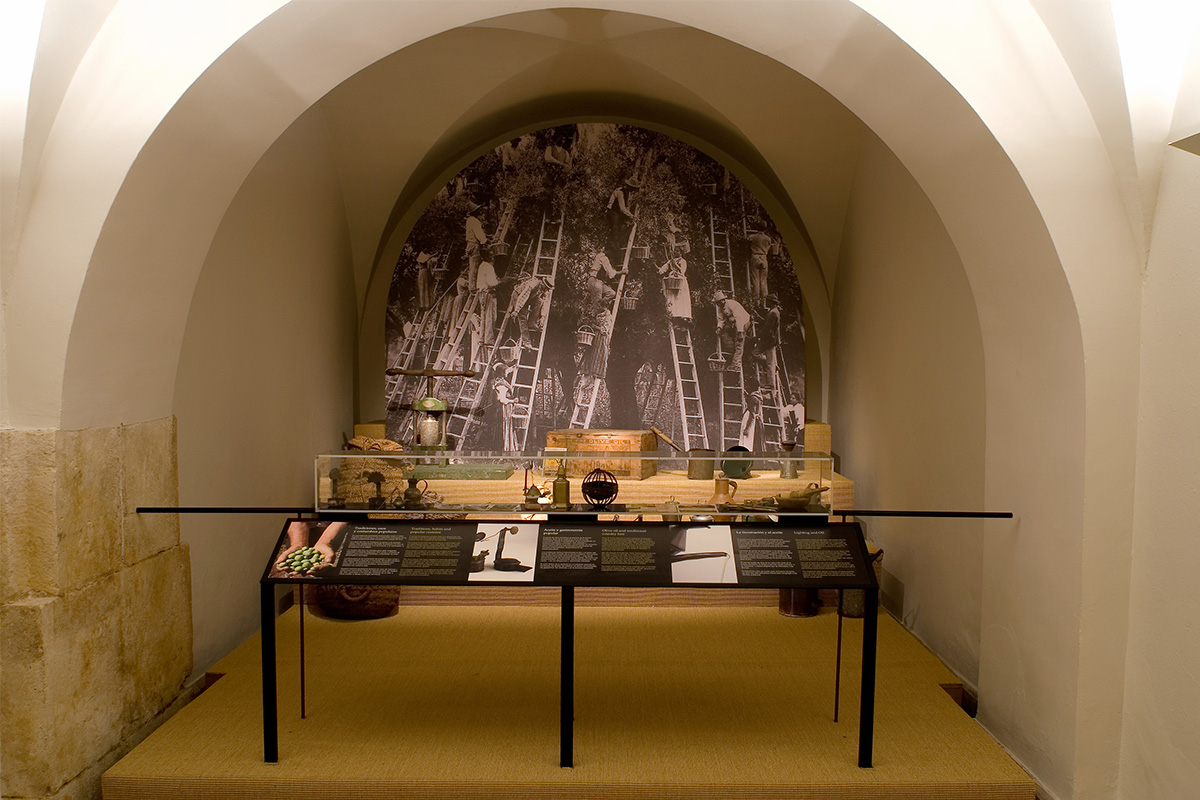 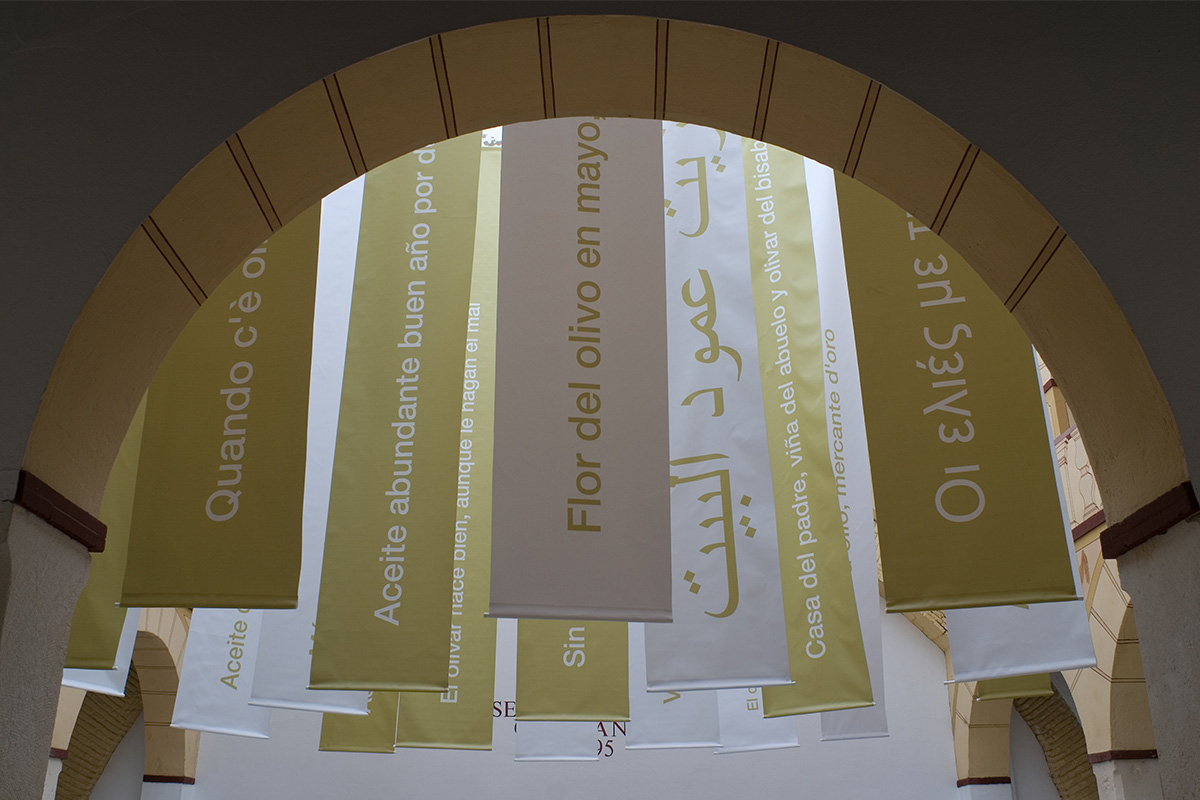 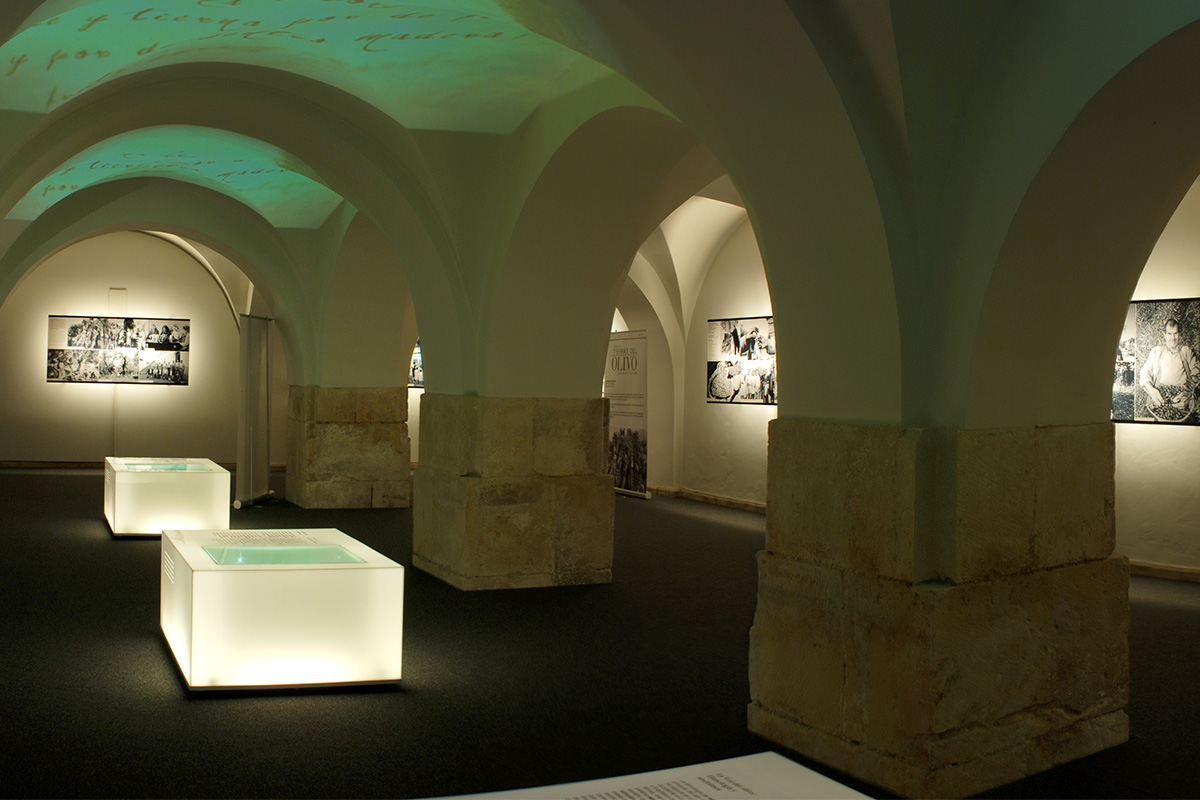 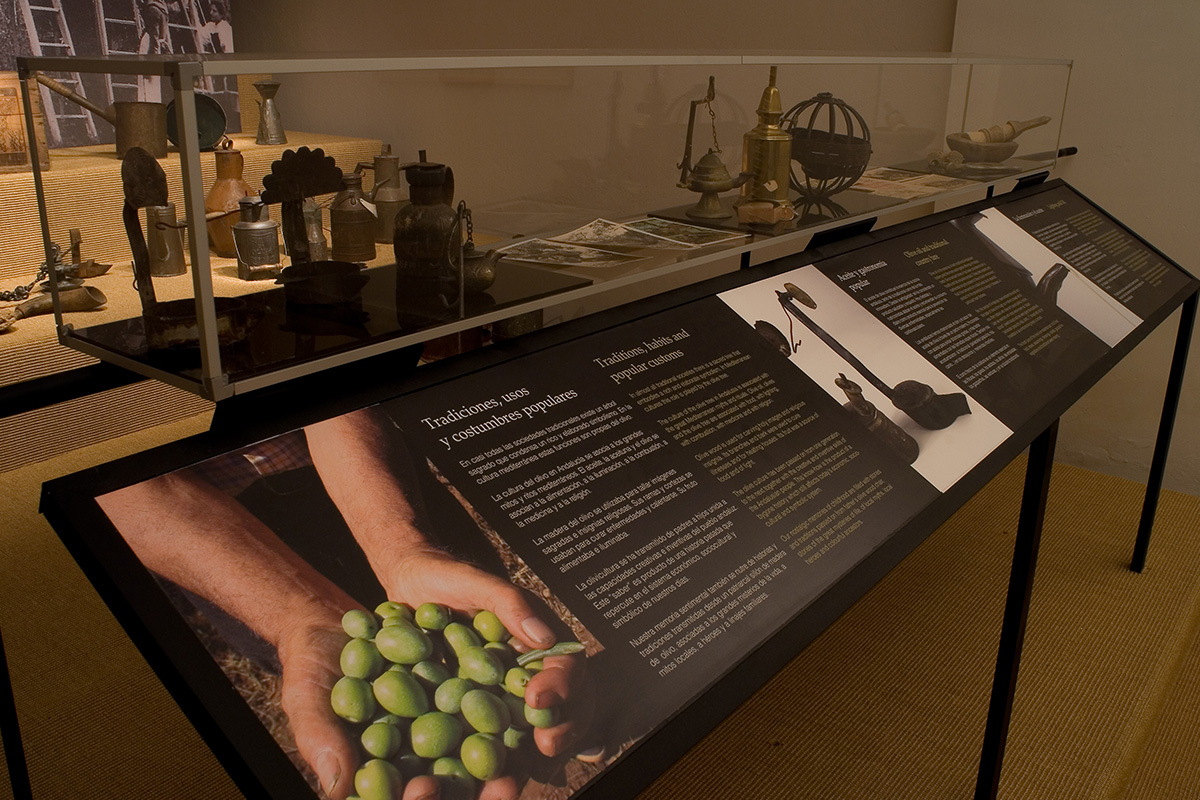 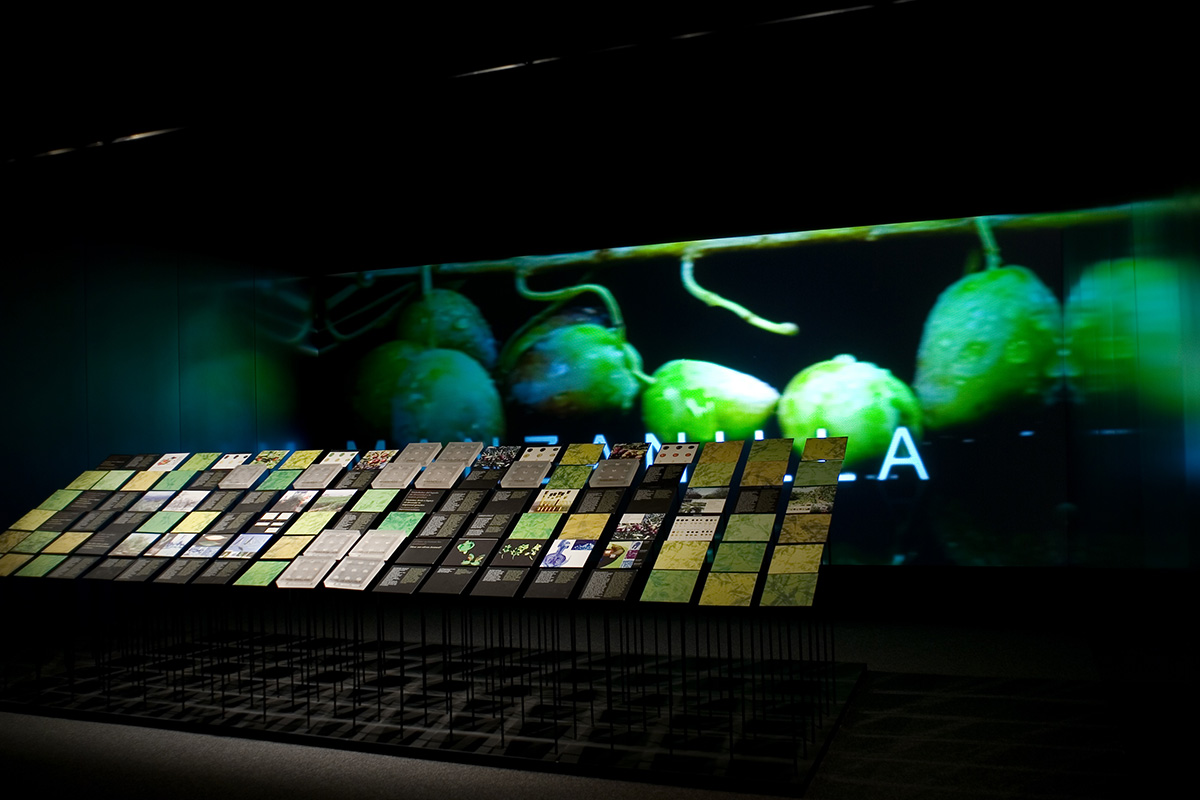 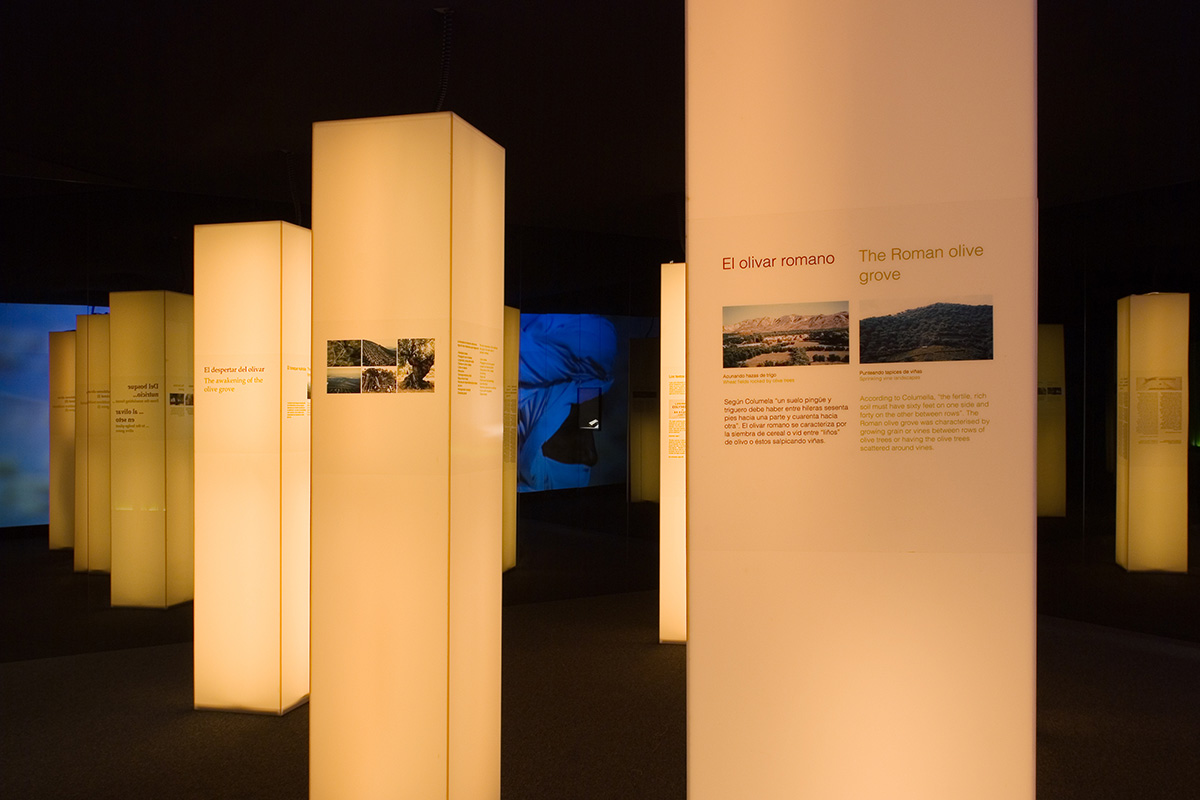 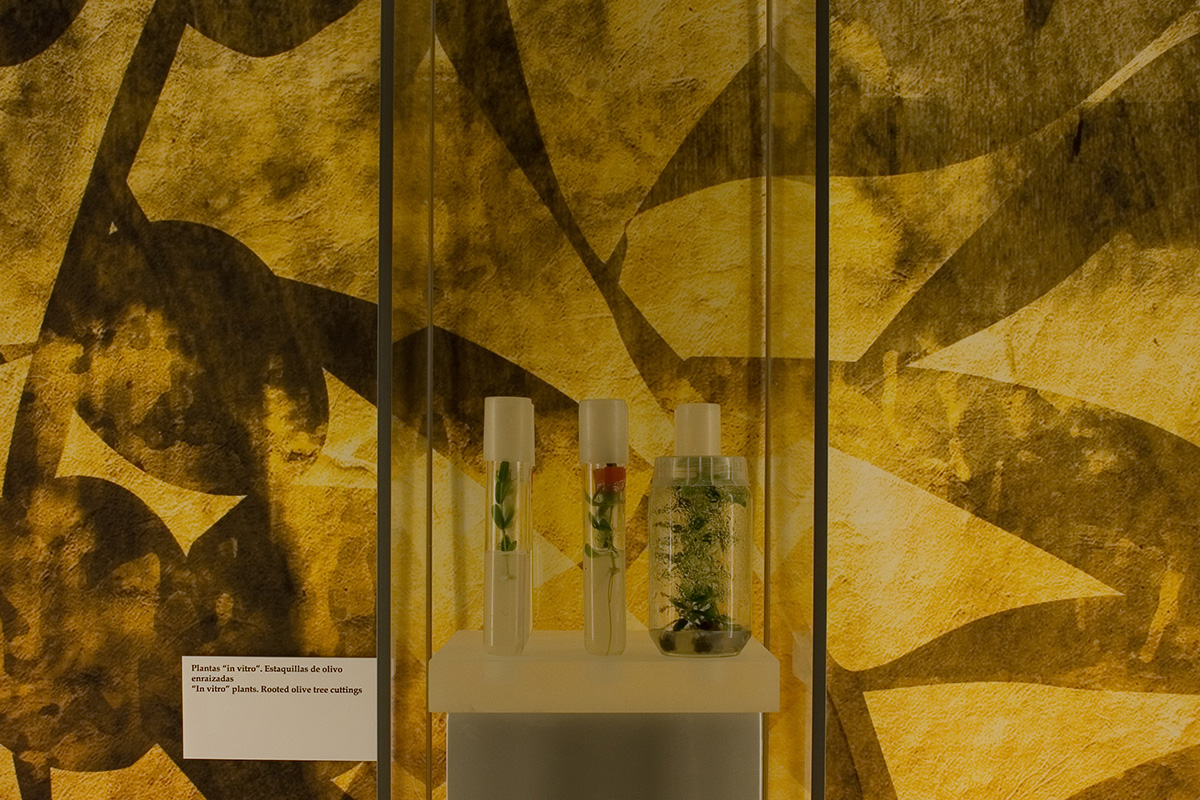 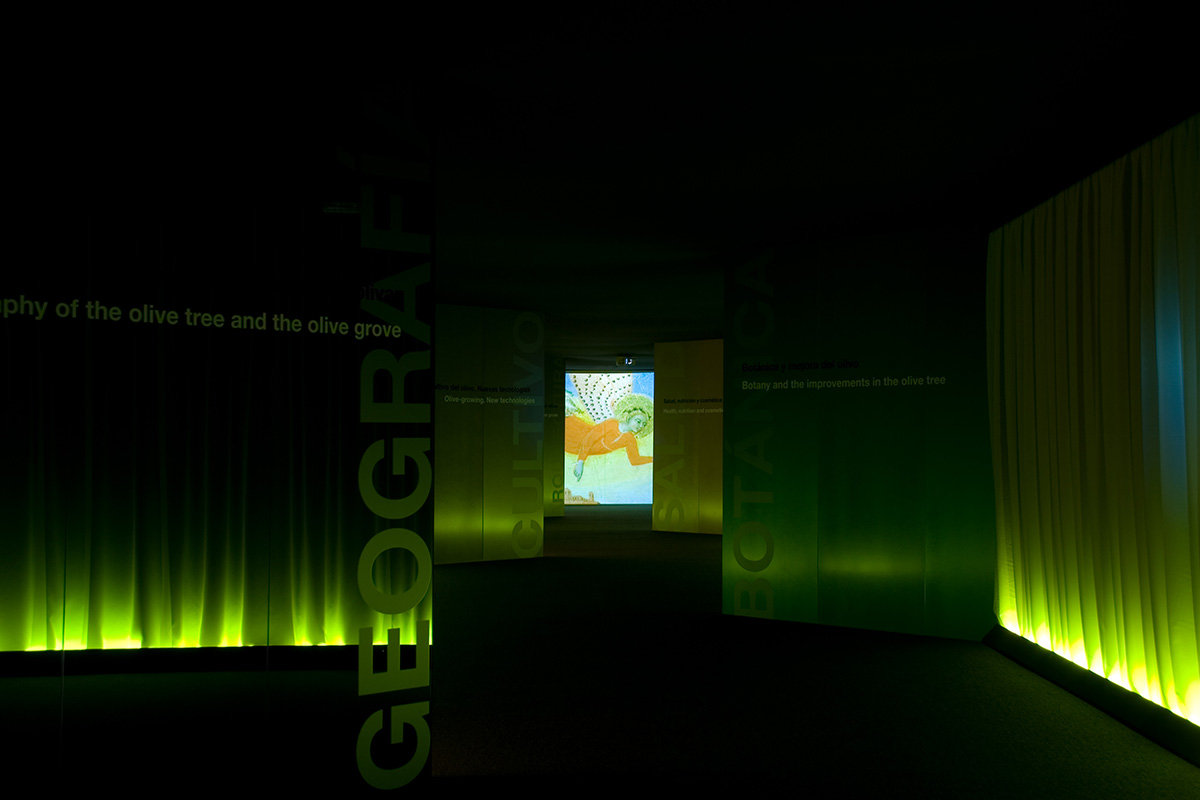 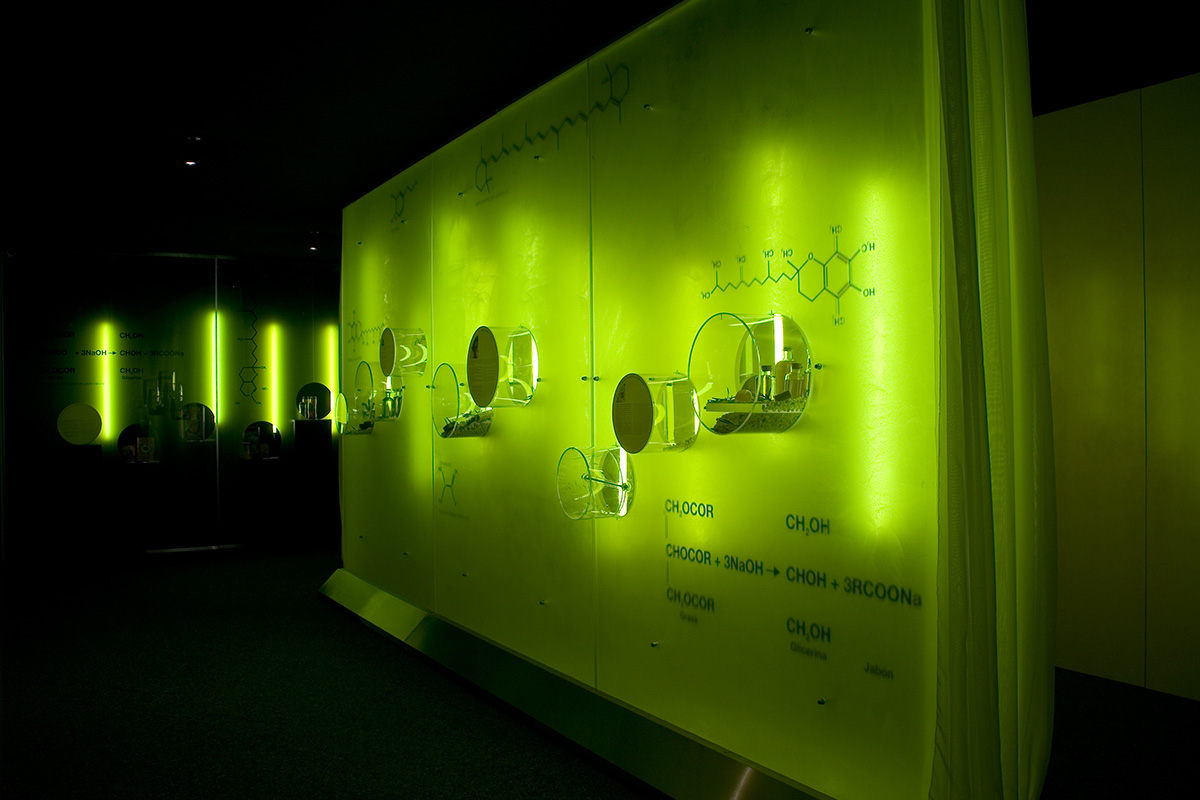 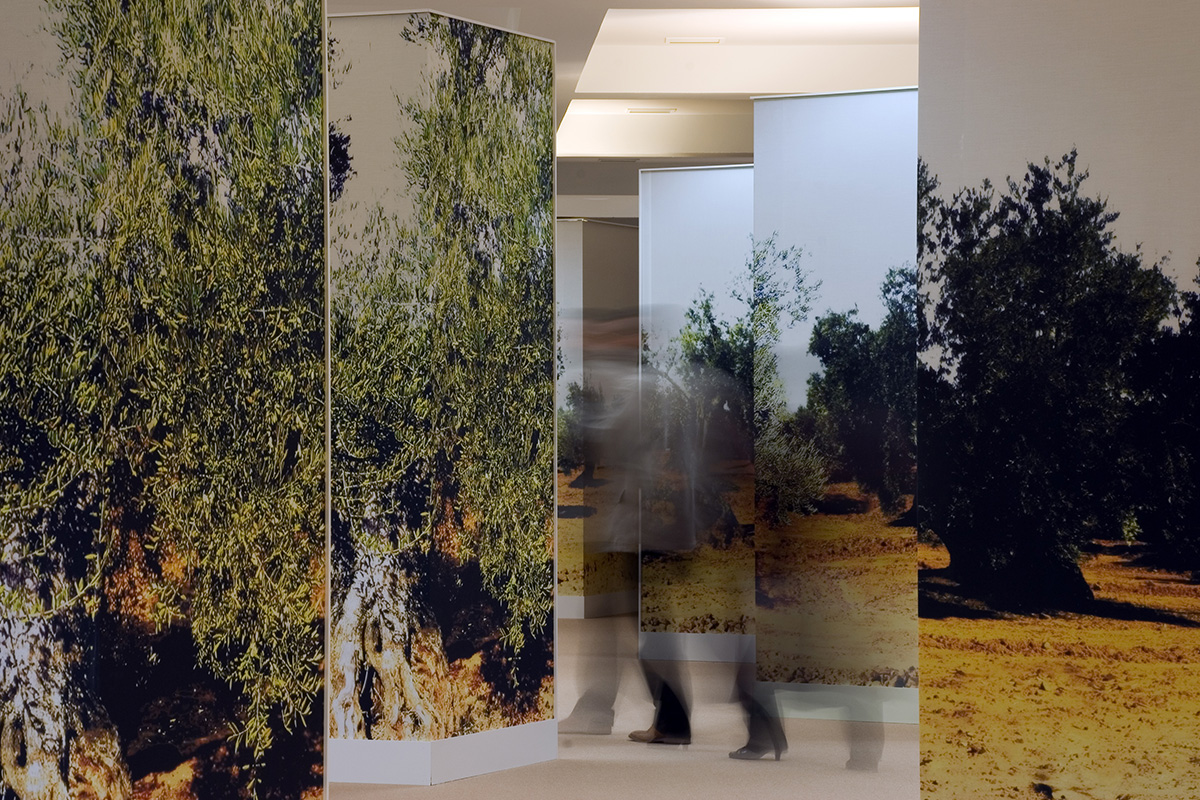 The exhibition Lands of Olive Groves was conceived as a top-level national and international event to be held in the provinces of Jaén and Córdoba. In this geographical framework, our wish was to talk about the past, present and future of the world of the olive grove, in the firm conviction that such an element well deserved a thorough analysis that would contribute to improving the projection of the olive oil in the future. The exhibition dealt with the traditional and historical narrow relationship existing between the lands of Jaén and Córdoba with the olive tree and its oil, as well as the relevance of the olive sector. In the framework of the ActivaJaén Plan, this exhibition was born as an initiative of the Andalusian Government (Junta de Andalucía), the General State Administration and the Provincial Board of Jaén. It relied on the collaboration of the Provincial Board of Córdoba, and the city councils of Jaén, Baeza, Úbeda and Baena. The coordination of the whole event was carried out by El legado andalusí Andalusian Public Foundation.

The main objectives of this exhibition were to show the meaning and importance of the olive tree and the olive oil in the history of the Mediterranean world, to analyze the history of the olive tree, its fruit, its products and by products, to show the relations between countries, to know about cultivation methods, farmers, companies and oil mills, and to showcase the olive groves, fields and agriculture as essential economic factors. It was all envisioned with the purpose of becoming a platform for the improvement of olive oil production in Andalusia, Spain and the Mediterranean, analyzing future prospects and the indispensable role of men and women in the countryside.

So, Lands of Olive Groves told us to us about history, literature, technology, economy, culture, tradition, modernity and future. All these elements got structured in four large thematic areas, distributed across the provinces of Jaén and Córdoba.

The first of these exhibition areas was The olive tree in Ancient times and could be visited in Úbeda (Jaén); the second was The Olive Tree. From the Middle Ages to the 20th century in Baeza (Jaén).
The objective of these two parts of the exhibition was to deal with the historical evolution of the cultivation and use of the olive tree throughout different peoples and regions, placing special emphasis on the history of the Mediterranean world and paying attention especially to the history of the olive grove and olive oil in Spain. In this sense, it was worth remembering the role that Spain, and specifically Andalusia, has played in spreading the olive tree throughout the world, both in the past and in the present day. In short, we proposed a complete journey from the origins of the Greco-Roman civilization to the present day, passing through the Middle Ages by means of many historical documents and archaeological pieces related to the olive tree.

Another of the themes of the exhibition –on display in the town of Baena, in Córdoba– focused on The culture of the olive tree. Step by step, it revealed the outstanding role of the olive tree through the legacy that has been clearly reflected in literature, painting, sculpture, cinema and the popular music. Countrymen and women also found their small tribute here, since they are the ones who, with their daily work in the olive grove, have contributed to construct this culture. Yet the truth is that a whole cultural patrimony has been created around the olive tree and its oil over the centuries, an invaluable heritage that is called to be preserved from all areas.
It was precisely this wish for conservation one of the main objectives of the fourth and last of the exhibition spaces of Lands of Olive Groves. The Olive Tree… Present and Future, on display in the ActivaJaén Building of the Provincial Fair and Congress Center of Jaén, where the idea of preserving and valuing the historical and agricultural heritage was boosted. It was here that the new technologies applied to the exploitation of the olive grove, renewable energies and, of course, the importance of this product in the Mediterranean diet, were shown. The exhibition showcased samples of olive oil and other olive-related byproducts from different producer countries such as Italy, Greece, Cyprus, Morocco, Syria or Lebanon, accompanied by information on oil production and table olives in each country, import, consumption and export, historical notes on the olive tree in that country and its current situation, main varieties, distribution areas of the olive oil patrimony and the main companies or brands that produce oil and table olives. Likewise, on the second floor of the ActivaJaén building, a space was dedicated to oil tastings, conferences and gastronomic workshops in which different countries participated.

The exhibition attached great importance to images. Thus, the exhibition in Úbeda showed two audiovisual productions: one on the amphorae accumulated on Mount Testaccio, in Rome and the other on the interior of the ships that transported olive oil. In the exhibition of Baeza, a large audiovisual projection on the main altar of the chapel of Old University (Chapel of San Juan Evangelista) combined images of olive harvesting during the 20th century. The section on The culture of the Olive Tree (Baena) hosted an audiovisual production in four subdivisions: the olive tree in literature, the Spanish popular collection of proverbs, popular folklore and a tribute to rural men and women. The headquarters of the exhibition in Jaén (ActivaJaén building) housed on its ground floor a “Corridor of Sensations” made up of images of monumental olive trees, and films on the cultivation of the olive tree, the architecture related to the olive tree and natural patrimony and ecology. The documentary Olive oil in Gastronomy was screened on the second floor.

As an ideal complement to the exhibition, the visitor had the opportunity to plan fascinating trips along the routes of El legado andalusí Foundation that run over the landscapes of inland Andalusia such as the Route of the Caliphate (Córdoba-Granada) or the Route of the Nasrids (Navas de Tolosa-Jaén-Granada).