Although the word al-Andalus acquires different nuances in Arab sources, the concept of al-Andalus refers to the territory of the Iberian Peninsula under the Muslim power, which spread over between 711 and 1492. Depending on the moment, it occupied more or less extension in the Iberian Peninsula: in its beginnings, in the 8th century, it occupied a large part of the Peninsula, and even went beyond the Pyrenees before undergoing a progressive decrease, sometimes slowly, other times accelerated, until the end of the Nasrid emirate of Granada in 1492.

The Umayyad Emirate and the Caliphate

When the Islamic civilization arose, at the beginning of the 7th century, it extended both East and Westwards. At the start of the 8th century, in 711, Arab groups and families coming from the East entered the Iberian Peninsula, as well as Berber groups from the Maghreb, which gradually settled in the lands of al-Andalus.

During the second half of the 8th century there was a dynastic rupture in the Islamic empire that ended with the Umayyads ruling in Damascus, in order to enthrone the Abbasids, who settled in Baghdad. An Umayyad prince escaped from Damascus, Abderrahman, landed in al-Andalus and founded a new state based in Cordoba, the Emirate, becoming independent from Baghdad.

There were eight emirs between 756 and 929 during a period that was culturally brilliant, –although also with some periods of instability– until Abderrahman III decided to found a Caliphate, proclaiming himself Emir al-Muminin (Prince of the Faithful) that, apart from worldly power, also gave him spiritual power over the umma (community of believers), so becoming completely independent from the East.

During the rule of this caliph and his successor al-Hakam II, al-Andalus went through some of the moments of greatest cultural splendour: his court welcomed great scientists, poets, philosophers… and during these years major works of the architecture of al-Andalus were built and enlarged, such as the palatine city of Madinat al-Zahra (Córdoba) or the mosque of Córdoba. In turn, they maintained contacts with the great foreign courts of that time, both in the Islamic scope, Byzantium and other European powers.

The Scientific and Cultural Legacy 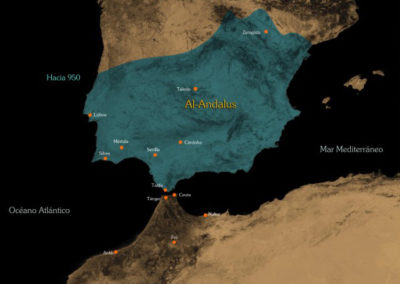 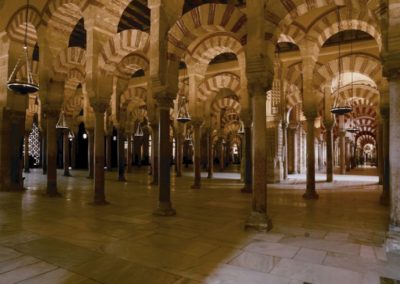 Forest of columns in the Mosque of Córdoba, a sample of art during the Umayyad period.

After more than twenty years of fitna (civil war), the Umayyad caliphate was finally abolished. Various provinces and local rulers of al-Andalus became independent and created courts, rivalling Córdoba in splendour. Some of the great Arab, Berber and Muladi families wished to take control of the country or, at least, of their city, and so, the Taifa kingdoms (muluk al-tawa’if) emerged. They proclaimed themselves lords and masters of the main strongholds. The rulers of Toledo, Saragossa, Granada, Almeria or Seville stood out, although there were many others. In the Sevillian court the poet king al-Mu’tamid stood out, who died in exile in the city of Agmat, near Marrakech.

The Christian advance, in turn, also obtained great victories, such as the one lead by Alphonso VI, when in 1085 seized the city of Toledo. 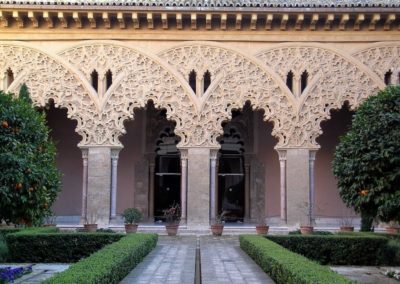 Courtyard of Santa Isabel, in the Aljafería Palace of Saragossa, built during the Taifa period by the Banu Hud family as a recreational villa.

In the meantime, by the end of the 11th century, a new political and religious movement started to emerge in the western Maghreb within a southern Berber tribe, the Lamtuna, who founded the Almoravid dynasty.

In al-Andalus, in view of the Christian thrust, the Taifa kingdoms turned to the Almoravids for help. This dynasty had founded the city of Marrakech around 1070 and lead by Ibn Tashufin, they penetrated the Peninsula, inflicting a serious defeat on the troops of Alphonso VI in Sagrajas. Soon they would manage to get rid of the Taifa kings and rule al-Andalus.

Nevertheless, during their rule, the Christians obtained important advances, such as the conquest of Saragossa by Alphonso I in 1118. At the same time, the Almoravids saw their own supremacy threatened by a new religious movement that emerged in the Maghreb: the Almohads.

This new dynasty was born within a Berber tribe coming from the heart of the Atlas mountains and, led by Ibn Tumart, was hastily organized to overthrow their predecessors. They also ruled from Marrakech and took control of al-Andalus, supplying it with some stability and economic and cultural prosperity. They showed themselves as great builders and surrounded themselves by the best writers and scientists of the time. In al-Andalus they established their capital in Seville. This dynasty began their decline in 1212 with their defeat in the battle of Las Navas de Tolosa against the Christian armies of Aragon and Castile. 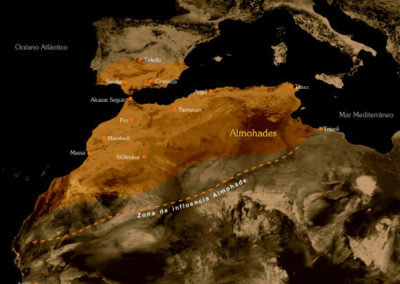 Al-Andalus during the Almohad expansion 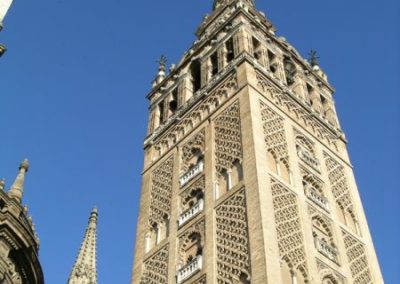 The Giralda of Seville, ancient minaret of the Great Mosque of Seville in the Almohad period.

The kingdom of Granada, under the Nasrid dynasty, was the last Muslim territory of the Iberian Peninsula. Although its limits were continuously changing, it extended through the current provinces of Granada, Malaga and Almeria, and through some territories of Seville, Cádiz and Jaén. It survived for 250 years despite its political fragility. Its most relevant testimony is the monumental complex of the Alhambra and the Generalife. In 1492 the last Nasrid king, Boabdil (Abu ‘Abd Allah) was defeated by the Christian troops, handing the city of Granada to the Catholic Kings before crossing the Straits of Gibraltar and settling in Fez. 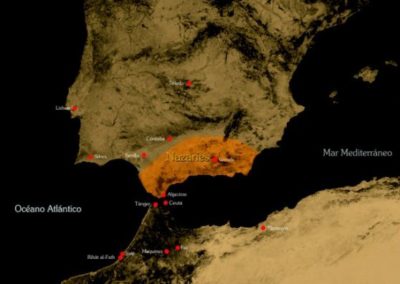 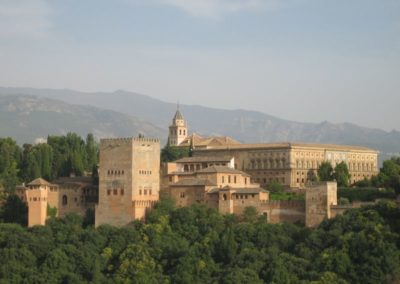 A view of the Alhambra of Granada, masterpiece of Nasrid art

The Scientific and Cultural