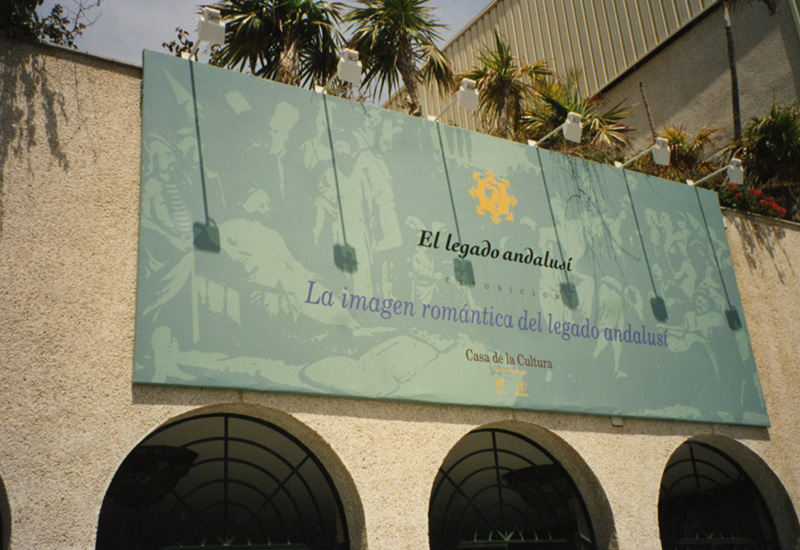 The exhibition rendered an extrapolated image of the history and culture of al-Andalus from the origins of the Islamic civilization to the decline of the Nasrid kingdom, the one recreated in the late 18th and 19th centuries by the Romantic travellers. It included subjects on philosophy of history, archaeology, mystery and legend. These questions found a unique center of attraction in Andalusia, especially focused on Granada and the Alhambra, which have become, since then, a universal emblem of beauty, mystery and scientism.
This exhibition aimed to recreate the paradisiacal environment of a territory reinvented by the Romantic travelers and by the stream of writers, painters and artists who visited Spain and the Andalusian territory during the 19th century.

The exhibition was structured in 11 themed areas: The birth of modern sensibility and the Islamic art in the 18th century; The literary image of Andalusian Arabic art in England in the 18th century; The crisis of Classicism and the discovery of the Middle Ages and The East; English travellers between the enlightened archaeology and the Romantic worldview; Arab antiquities in the Spanish historicism of the Illustration; The voyage to Andalusia and the new aesthetic ideal of the East, The English Romantic travelers; Granada and Chateaubriand: “The last of the Abencerrages ”; Delacroix’s presence in Andalusia and Morocco; The sensitivity of Spanish orientalist painters and “Alhambrismo” in the aesthetics of the second half of the 19th century.

Among the remarkable books on display were A family in the outskirts of the Alhambra (1879) by Henry Stanier, Antigüedades Árabes de España, by Hermosilla, Villanueva and Arnal, The Arabian antiquities of Spain, by J.C. Murphy and The Alhambra, London 1832, by J. Scourt.