The Routes of El legado andalusí

Cultural Route of the Council of Europe since 1997

from Almeria to Granada

on The Routes of El legado andalusí

It is always easier to walk the ways others have already travelled than to make a new way, especially if the paths traced survive and have persisted throughout history.

The Routes of El legado andalusí, or The Routes of al-Andalus, go through those paths that were once traced to communicate the Kingdom of Granada with the rest of Andalusia, Murcia and Portugal.

Speaking about “The Routes of El legado andalusí”is to speak of a brand, of a concept that brings several topics together: history, culture, heritage, people and traditions. Along routes drawn on the map of Andalusia on a historical basis and inspiration scattered through towns of Andalusia that have lot of things to reveal and offer to the visitor.

These routes have not been chosen at random; they are all age-old paths. Some of them arose as a need to supply the capital city of the Nasrid Kingdom with products such as fish or meat. Others acquired fame for having been travelled by illustrious voyagers such as Washington Irving or Ibn al-Khatib at different times in history.

The Andalusian Public Foundation El legado andalusí has recaptured these villages through these Routes. They take us to more than 200 villages, many of them far away from the usual tourist circuits, and offer the traveller the possibility of enjoying peaceful landscapes, relaxing trips and tasting gastronomic delights. They let his imagination fly, making the past present, and they are a real invitation to enjoy handicrafts, gastronomy, popular festivities and customs of the towns and villages the Routes run through.

We are facing a true commitment to strengthen the cultural and inland tourism offerthat combines a demand driven by the broad Andalusian potentialities, based on historical, cultural and landscape resources. The creation of this network of Routes aims to bring closer to the visitor villages and other places of interest that, for different reasons, (monuments, location, historical, literary or legendary references), are linked to the civilization of al-Andalus. In this way, the Routes allow the voyager to access different places, either following the current communication routes, recovering traditional roads or walking on paths former travellers already walked.

The main goal is to turn these routes into a sustainable engine of development through a quality product of cultural tourismable to boost the service sector by facilitating job creation and combating depopulation.

The traveller can cover certain parts of these routes by horse, cycling or on foot, in closer contact with nature, and always respecting the environment.

The Routes of El legado andalusí have a wide infrastructure of support available for the traveller, whose purpose is to offer all the information on the routes and services that the traveller can find on his trip. This infrastructure gets completed with a careful collection of travel guides, leaflets, as well as a complete signposting plan, information points and alternative routes.

The routes are complemented with Walks around Granada, which let the traveller travelling around the typical streets, squares and spots of this city, the last Arab stronghold in the Iberian Peninsula and the end of all the Routes of El legado andalusí. 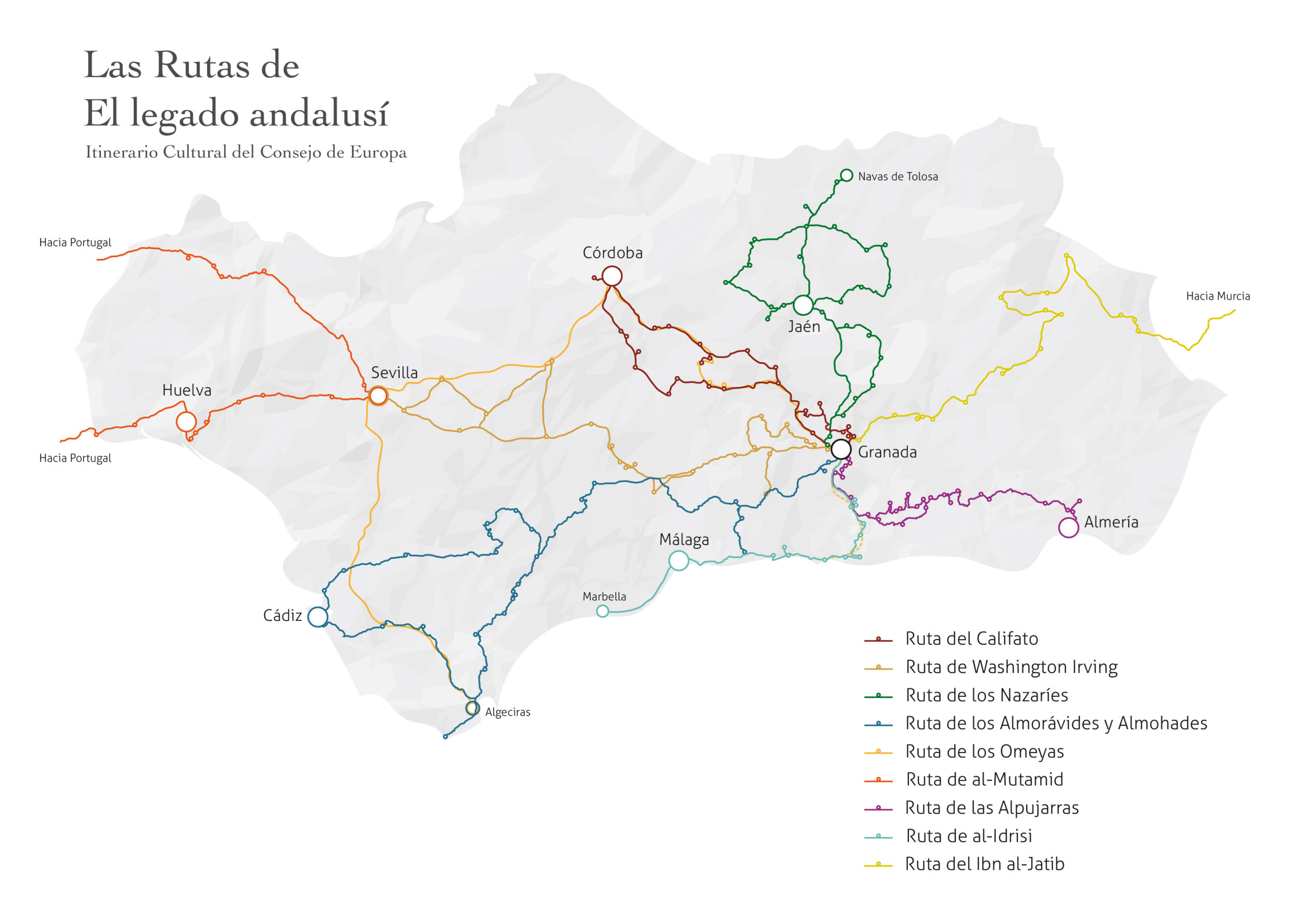