a politician behind the poet

Legend wraps in mist the life of al-Mutamid, the king-poet of Seville, a man whose story has remained hidden under a thick layer of romanticism. He was a sensible monarch who nurtured his court with the most important writers in western Islam, and he finished his days in disgrace, as he was treated more like a story character than as an actual individual who ruled the most powerful taifa (kingdom) of his time.

LTradition describes the last sovereign of the Abbasid dynasty as a talented poet who could relish the delights of lyric to an extreme, to the extent that he became intellectually and physically seduced by his preceptor and vizier, as well as by a slave with whom he felt madly in love and made her his wife. His tragic fate, locked up in a cell forty kilometers from Marrakesh, only completes a character so prone to mythification. Although it was true that he brought about growth in the arts, in particular in poetic literature, where he was the most prominent and talented of cultivators, the fact remains that he adopted a politics of expansion that allowed him to enlarge the territory of the Seville taifa by military means.

Muhammad ben Abbad al-Mutamid came into this world around the year 1040 in the city of Beja –currently in Portugal, and at that time a city that belonged to the Kingdom of Seville– despite those who wanted to see that he was born in the capital. After the early death of his eldest brother Ismail –murdered supposedly as a traitor– he became the heir of a great kingdom that, due to the policy of his predecessors, annexed the present Portuguese regions of Algarve and a great part of Alentejo to western Andalusia.

As a worthy successor of such designs, the new monarch assumed, between poem after poem, the tasks of expanding his territories, annexing the taifa of Córdoba in 1070 –which was headed by one his sons– as well as the one of Murcia in 1079, hence dominating all the lands of the peninsular south from the Atlantic to the Mediterranean, excepting the kingdoms of Málaga, Granada and Almería.

Under the guidance of al-Mutamid, Seville became, de facto, the greatest and most powerful kingdom of Al-Andalus, with pretensions of legitimacy to rebuild the ancient Caliphate according to the whims of his territorial expansion. The conquest of Córdoba, a symbolic city after having been the political center of the old, unified Al-Andalus, incited hostility towards the two forces that risked being ousted: Toledo, whose king al-Mamum won Cordoba though in a brief, ephemeral way and the Sevillians thanks to the invaluable cooperation of a qadi named Ibn Ukkasha, and the Zirid Berber Kingdom of Granada, Seville’s big opponent. 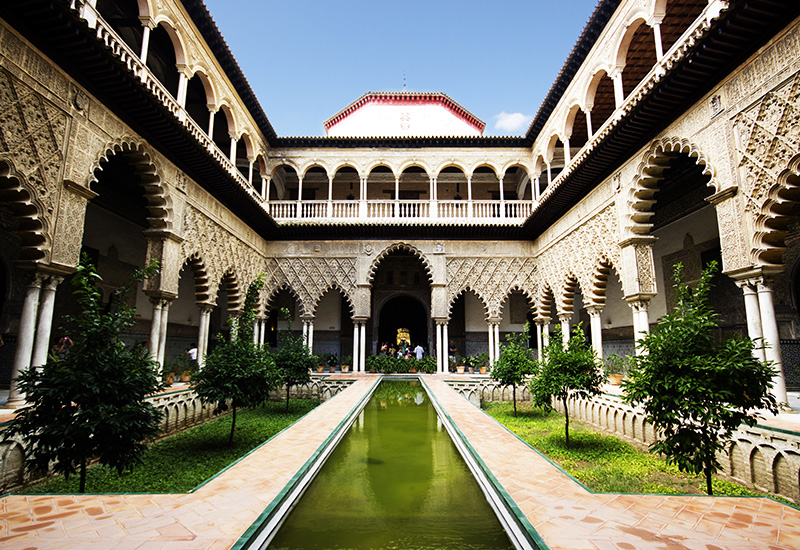 The poet-king, whom tradition has portrayed as a peaceful man, one even blind to political issues, appears here as a very earthly ruler, perfectly attached to the expansionist tradition of a dynasty that from its origins claimed the whole Al-Andalus, accepted as a figurehead to be dominated by the Abbadids as the legitimate heir of the Caliphs of Al-Andalus. The loyalist ideology of the founder, Abu al-Qasim, constituted the guiding principles of al-Mutamid’s policies, together with the constant and long-standing racial tension that, as head of a lineage of Arab origin, was always maintained against the Berbers, who were mainly represented, as already mentioned, by the Zirid dynasty of Granada.

Poetry in the Sevillian court played a tortuous role with a political background, in the attempt to discredit the kings of Granada and the Berber dynasties in general. In the shape of a political weapon or as an escape though literature, poetry was an indispensable element in the life of al-Mutamid.

To throb with love or longing, to attack his enemies or, also, to receive poisonous volleys, like the ones he had to endure when his former vizier and confidant Abenamar, who had already fallen into disrepute, wrote him verses from Saragossa with the intention of humiliating the last king of Seville.

The city of Marrakesh and the snowy mountains of the Atlas in the background, and the minaret of the Kutubiyya mosque in the foreground.

Al-Mutamid was aware of the political responsibility that the sovereignty of the kingdom he ruled implied. Behind him, the roadmap designed by his grandfather, Abu al-Qasim, that was also followed by his father al-Mutadid, could be recognized. The Sevillian plan could not accept the permanent payment of tributes from one prince to another in recognition of superiority (parias), and the third Abbasid believed also that it was time to show his power before the Christians. However, the long period during which he had not paid the parias to king Alphonso VI of Leon served to evince the superiority of the northern kingdom, and as a reprisal he laid siege to the city of Seville. King Alphonso VI did not order a withdrawal until the debt was payed off with interest, so that al-Mutamid had to pay three times more the amount that he owed. Legend, however, tells this story in a more beautiful way, and makes Abenamar, vizier to al-Mutadid the winner of a decisive chess game against Alphonso VI, after which the king of Leon lifted the siege on Seville and returned with his armies northwards.

Al-Mutamid was a politician, a diplomat and a warrior. From the earliest age he was assigned to lead military campaigns, some of them failed, like that of Malaga, and successful ones, such as the one of Silves. The pre-teen al-Mutamid was also very familiar with the tasks of governance, first appointed as governor of Huelva, and of Silves afterward. It was here where he met Abenamar who, from that moment on became his mentor, his playmate in literary games and right hand till he betrayed him. Silves was also the place where he met the woman who would be his most loyal wife, the favorite of a harem that it is said to have hosted eight hundred women. Once again legend comes to overlap reality: this time stories tell that the king met his wife-to-be in Seville on the banks of the Guadalquivir river, where al-Mutamid and Abenamar were taking a walk while they playfully improvised verses. A feminine voice responded to one of those verses and it turned out that it was Rumaikiyya, laundry-woman and slave of the muleteer Rumaiq. Al-Mutamid was captivated by her, and the prince bought her and married her under the new name of Itimad, although in the court she was known al-Sayyida al-Kubrà, the Great Lady. The reality was surely more mundane, although their mutual affection was to be genuine.

View of the walls of Marrakesh with the Atlas Mountains and palm grove.

The decadence that began after the Christian conquest of Toledo in 1085 should not make us forget that the fact that al-Mutamid was a king as much a politician and warrior as his ancestors, to who actually proved to be prepared to advance militarily through the lands of al-Andalus, whose taifa courts had abandoned warlike zeal to enjoy luxury instead, with no will to face the power that Alphonso VI represented. He might have felt the taking of Toledo as a betrayal rather than something to fear. The Christian king was so bold as to take the first step to make clear to the pretentious Sevillian that he was the one who was ultimately in charge. Al-Mutamid joined the other Muslim kings and, together, they decided that before the Christian menace, they had to ask for help from the powerful neighbour beyond the strait: the Almoravid empire. Yusuf b. Tashfin, the emir of the Almoravids, accepted the invitation to penetrate the peninsula, and he defeated the Christian armies at Zalaqa (1086), near Badajoz, ousting momentarily the dangerous shadow of Alphonso VI.
Unfortunately, another shadow was drawn on Al-Andalus, as threatening as that of the Christians. It was none other than the Almoravids, who intervened again in the territory at the request the king of Seville, who saw the communications of his kingdom at risk after the king of Toledo conquered Aledo, in Murcia. The second Almoravid intervention revealed the military dependence of Seville and, obviously, the rest of the Muslim kingdoms in Spain. Encouraged by his civil and religious counselors, Yusuf b. Tashfin undertook the conquest of the territory to reunify again Al-Andalus within the borders of his empire. The taifa kingdoms fell one after another like so many dominoes, until Seville’s turn came, which fell after a powerful resistance.
The later overthrow of the king and his imprisonment, the origin of the last of the romantic legends of al-Mutamid, should not allow us to forget that if the Almoravids conquered so easily the whole territory of Al-Andalus, it was because its people were largely in favor of the displacement of the corrupt courts of the taifas and their substitution for Yusuf’s government. The poverty of the people, aggravated by taxes through which parias were paid to Christians, as well as the unstable political situation, led the very locals to open the city walls to the Almoravid invaders. This marked the end of a golden era for luxury and cultural development, and the loosening of customs, against the most basic dominance and religious strictness of Yusuf B. Tashfin and his descendants.

View of the king of Seville’s mausoleum in the small village of Agmat, near Marrakesh.

The taifa of Seville was not an exception to the norm, even though the city courageously resisted the siege. As compensation, the assailants plundered its streets at pleasure, as a reward for the great efforts required to take such a resistant population. The king of Seville, devastated by the defeat, having lost several sons in the battlefields and seeing himself a prisoner, entered into legend. He died in Agmat, current Morocco, where still his remains repose.