The awareness of landscape in al-Andalus

For the civilization of al-Andalus, landscape constituted the image of a reality in which its values are preserved and granted symbolic dimension.

The renowned historian Ibn al-Khatib, stateman, philosopher, literary man and doctor in 16th-century Granada, described this city and its surroundings in a personal style, detailed, intimate and we would not be exaggerating if we said he had the style of a Romantic writer. His words referred to the city of Granada with beautiful words. This is how José María Casciaro translated it:

“[…] Granada […] because of facing the mountains, is the place which receives those who come in times of hardship and, thanks to its dried fruits, enjoys something of a second harvest. Given its situation, in the back of the countryside, […] it is a sea of wheat and a mine of most excellent cereals and, finally, due to the location of the snowy mountain of Sulayr (Sierra Nevada), famous among the mountains of the earth, it is surrounded by water, its airs are healthy, there are plenty of orchards and gardens, and thick forests and many fragrant herbs and medicinal plants are abundant.

In its region there are beds of precious minerals, like silver, lead, iron and zinc, marcasite and lapis lazuli; in its peaks and ravines, tuberose and gentians grow. […] .[I]

Its spacious fertile plain is pondered among travellers and in gatherings; God has spread it over a plain crisscrossed by streams and rivers, where alquerías (farmsteads), orchards with very beautiful spots and beautiful buildings are huddled […]. It is surrounded by hills and ridges in somewhat the shape of three quarters of a circumference. For this reason, one can imagine the city as lying down from the part nearer to the circle up to the upper hills, the projections of hillocks and the tall peaks.

The buildings of this great city, as well as the suburbs that depends upon it, extend over five hills and the wide lowland of a spacious and well-groomed flats where there are not ruins nor wastelands anywhere. There are palm tree groves […]. There are also solid bridges and old mosques and markets very well organised.

Crossing the city is the famed river Darro, which comes from the eastern part and flows in its outskirts into the river Genil, which comes from the south. Then, it passes through the spacious fertile plain continually increasing its flow with the water from the ditches that join it in the alfoces (groups of villages) next to the city […].

The Alhambra citadel overlooks the population in the direction of midday (south), crowning it with white crenelations […]. The excess water and that from the overflowing ponds and pools falls down forming brooklets, whose rumour can be heard from afar. Its walls are bounded by vast gardens and thick forests which belong to the sultan’s private patrimony, so that behind that green fence, the white crenelations shine like stars in the middle of a dark sky. Not a single area is barren of orchards, cármenes (enclosed houses with gardens) or gardens.

In the northern part of the plane there are almunias (recreational houses) of a great value and high quality […]. Around thirty of them belong to the sultan’s private patrimony. Magnificent properties adjoin one to another by their farms which are never depleted but always fertile […]. All of them have magnificent houses, high towers, wide dovecotes, well-conditioned henhouses and more than twenty of them are inside the urban area and within the enclosure of its wall. In these properties […] there are even castles, mills and mosques […].”

View of Granada with the Zirid walls in the historic quarter of the Albayzin with the palace of Dar al-Horra in the middle and the Alhambra palace in the background.
©Fundación El legado andalusí. Carmen Martínez Amat. “La muralla zirí”.

The discourse that this historian writes reminds us that “speaking of landscape is the same as saying that we are proposing to translate that which is all around, which presents reality by organising it, adding values to it, symbolic dimensions and meanings [that] [que] landscape is not the reality, but an image of reality, culturally arranged as reality .”[I].

From this text and these initial reflections, we cannot overstate the interest shown by the people of al-Andalus about the environment in which they lived, because of the physical reality of Nature, drawn by the grouping of trees, rivers and mountains in urban ensembles too, for they, built also by men in the surrounding nature, sprung up and settled down in permanent dialogue with their living environment. Together, city and environment were considered a fundamental and essential good to create culture and to provide individual and collective welfare and, quality of life to the human being.

The twofold dimension of this concept ̶ physical reality and cultural construction ̶ must be considered in any stage of history before being studied. No matter what the real reference is, nature or space, its reading find sense only by virtue of each interpreting community. This means that we need an eye which behold the ensemble and generates a feeling that can read it emotionally, because landscape, as it is said, is not exclusively a physical place but a series of ideas and feelings that emanate from the place.[II]. 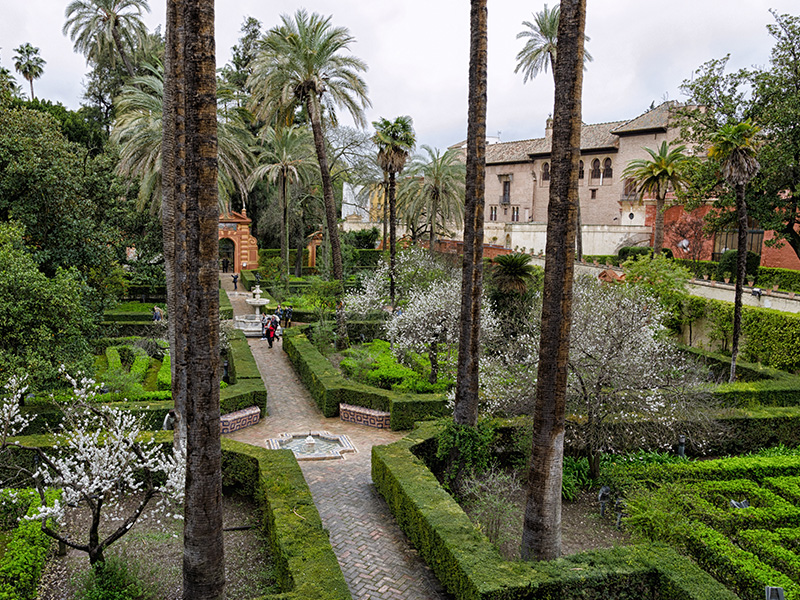 The culture of al-Andalus represents the practical achievement in the Iberian Peninsula of a series of vital principles, of thinking and aesthetics brought in their essence from the East, which were melded with the cultural traits of the preceding civilizations. The aesthetic standards of Arab and Islamic culture arose mainly from the dictates of beauty as described in the Koran, which represented the idealization of an atmosphere that offered plenty of bounties to the man of the desert, where the holy book had its origin.

​The vision of landscape that the people from al-Andalus had responds to certain keys to Muslim Arab thinking and, in general, to numerous vital keys to Mediterranean culture. Such a vision finds expression in the rural and urban environment, both in relation to the natural milieu, as in the synthesis of it with gardens, orchards and recreational estates. In the gardens of al-Andalus, tranquillity, harmony, water, the green of plants and trees and shade, all compose the ideal atmosphere, which is the metaphor of paradise, the sublime realm for senses. It is no less than the locusamoenusof the classics in which the already mentioned paradise-like images are aggregated. Their essential structures, like the garden with crossed paths, can be seen in the Court of the Lions in the Alhambra or the Almohad garden of the Sevillian alcázar, and today it is embedded in the ensembles of government buildings. Among various configurations, this layout, with the pool in the centre surrounded by plants, can be seen in the Court of the Myrtles of the Alhambra, in Madinat al-Zahra (Córdoba), before the Hall of Abd-er-Rahman III or amalgamated into the Moorish houses of Granada, like the Casa de Zafra or the Palace of Dar al-Horra. 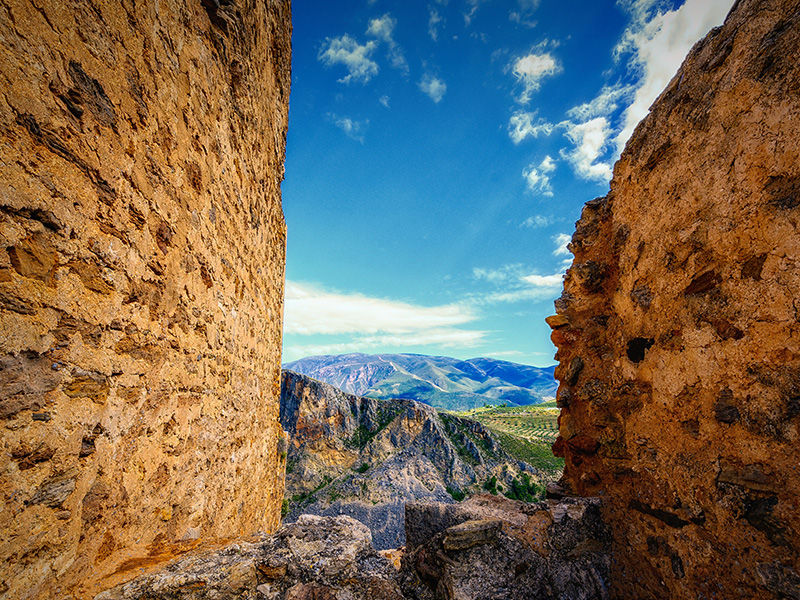 Among the communities that have participated most strongly in the historical configuration of the landscape of al-Andalus, the most outstanding were the medieval Arabs and the people from al-Andalus. The development of this civilization, during eight centuries, left traces still visible nowadays in the rural and urban areas of this region, in historical and archaeological ensembles, in the reminiscences of the names of places, species of trees, crops and farming systems, among others.

At the beginning, these works arose as an answer to the requirements of an empire that expanded to a very surprising extent, which needed to know its conquered territories, as well as their characteristics, in order to facilitate the transport systems, the communication networks and the postal services among others, that evolved from a mathematical geography to a human geography in which a great attention was paid to men and their environment. In this way, the genre named al-Masalik wa-l-mamalik(The roads and the kingdoms) arose to that purpose. But these geographical sources were also the ones prone more to incorporate legends and stories that belonged to the cultural background of the ancient East, the Mediterranean in general and of the Bética (province of the Roman Empire in Hispania) in particular. These referred to the descriptions of the places without distinguishing between legendary and historic, between the real and the imaginary.

At the beginning, these works arose as an answer to the requirements of an empire that expanded to a very surprising extent, which needed to know its conquered territories, as well as their characteristics, in order to facilitate the transport systems, the communication networks and the postal services among others, that evolved from a mathematical geography to a human geography in which a great attention was paid to men and their environment. Landscape information in these sources was normally very abundant, although there are great differences among authors. Some of them just describe the environment as a background, while others repeat clichés taken from previous authors. Rather, there were also meticulous geographers interested in describing the landscape authentically and in detail, although lacking thoughtful speech or not intuiting something of artistic intention.

The author who describes in greatest detail the territory of al-Andalus was perhaps al-Idrisi (12th century). He allows us to have an idea about the way the natural environment was configured and what were the relevant elements of any city. As for instance the description of the city of Almería: [I]

“Almeria was an important city in the times of the Almoravids. It was a city with quite of considerable industrial activity and it had 800 looms to work silk […]. The valley [[cercano]] Almería produces a great deal of fruits […]. This is named Pechina, and it is located four miles away from Almería.

[The city] is built on two hills, separated by an inhabited ravine. In the first of these hills is the alcazaba (fortress), famous for its [[imponente]fortification; in the second, called mount Laham, is the outskirt. Both the city and the outskirts are enclosed by walls.

[…] The terrain on which the city is built is very stony all over, there are only heaps of rocks and hard stones. [De hecho] [In fact] there is not a single piece of soil that, apparently, had not passed through the sieving process, in the way that only stones have remained”.

The al-Andalus civilization, as any other pre-industrial one, is in constant contact with nature; where there is not conflict but dialogue, to the point of adding value to those cities that had a provision or disposition toward spatial landscape. We can affirm that there was a tacit agreement of respect to the environment that was destroyed only in the case of events of war or natural disasters. In al-Andalus there was an awareness of landscape suitable to its time and linked to its cultural and vital principles, whose expression appears repeatedly in sources of diverse kinds.

If only this appreciation would have been taken into consideration in our own day, as we witness the deterioration, at times irreparable, of our landscapes. We often forget how important it is to “preserve and enhance” the landscape, disregarding the fact that it collaborates in full of our general welfare, feeding at the same time a very important part of our very cultural and patrimonial identity.