Surrounded by the biggest walled enclosure of Europe, Niebla has important artistic treasures from different eras and distinct backgrounds. Its history deserves to be told.

The old road linking Seville to Huelva crossed the Roman bridge, which was targeted, defended, restored hundreds of times, to then skirt the canvas of walls with their almost intact doors and arrive for the second time at the purple waters of the Tinto River.

Now, only the tops of a cement factory can be seen from the motorway: Niebla gets lost, as if it had never boasted of a privileged site, as if it had not played a role in the History of this land of thousand stories.

There is no doubt that its position in the territory —between the mining North and the fishing South, between Mértola and Silves in the West and Seville– reserved it a major role for a long time, even before Roman times, when the second sons of the Castilian noble families made themselves greater than the firstborns by fighting the Moors because it was that way there and at every border.

The walls were there, it is only necessary to stray less than a kilometre to be able to contemplate again their grandeur, still in need of good luck today. Their greatness does not lie in the two kilometres that cover almost one hundred sections and towers, but in the loftiness that their construction on the slope provides, the stone ashlars and, above all, its gates.

Of the gates that opened Niebla to the exterior, which either were closed when needed or open when occasion required, only five or six remain. They are all beautiful and some even superb: the Puerta del Agua (Water), del Buey (Ox), del Socorro, (Relief), la del Agujero (Hole), la de Sevilla (Seville) and some remains of the Desembarcadero one, along with two postern or secondary gates. In its foundations and tops, blocks of a probable Punic origin are mixed with the civilizing order of Rome, the disorder of its fall, the beginnings of Al-Andalus, the Abaddids’ Taifa, the rise and splendour of the Almohads, all the way to the minute kingdom of Aben Mafot, whom Alphonse X wisely incorporated into the crown.

The empty places between the walls and the old road are filled with a collection of disused cannons, even some relatively modern ones. They stand there preaching that in those walls gunpowder was used for the first time as an offensive weapon, and it will be true. However, what was blunter was the sagacity and intelligence of the Wise King, even though these qualities do not appear in the accounts of the city’s history. 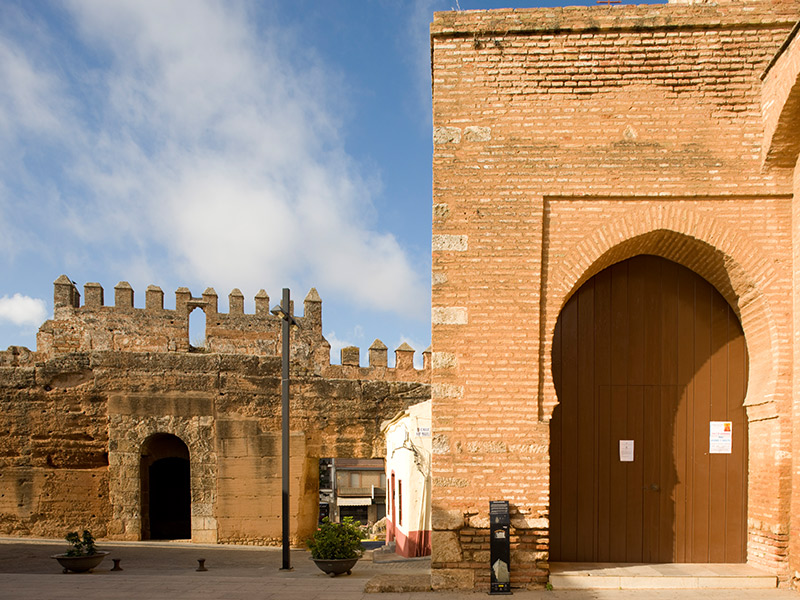 Inside the wall of Niebla. ©Xurxo Lobato

Probable location of the old Arab fortress, and the castle of the Guzmán in the background. ©2021 Junta de Andalucía

In reality, Ferdinand III’s son reached an agreement with Aben Mafot, who became his vassal, one of the many nobles that lorded over their domains, appearing before the others like a king’s vassal in many of the documents of the time.

The “kinglet” lived in Seville until his death, in Sol Street, which still recalls his name, House of the Moorish King, and it had an orchard that is today a garden known as Huerta del Rey.

In fact, the strategic vision was shared by both, the one from Niebla and the Castilian, since Alphonse III of Portugal was the one who pushed for the territory, having never confessed his intentions of stretching his possessions to the Mediterranean Sea. The agreement was then of mutual benefit.

The Andalusian nobility was born in the troubled waters of the struggles of Alphonse and his sons, that of the regencies, and those of Peter I against his stepbrothers. The Guzmanes were born in Niebla, whose castle stands almost at the foot of the very Gate of Seville. Its building was made by collecting the remains of other earlier fortresses that were provided by the first Guzmán  ̶̶ Guzmán el Bueno ̶   and those who came afterwards, already more courtiers than warriors. However, nothing is left from the beautiful alcázar (castle) with a golden dome that competed with that of Seville.

Throughout the walk on the never-ending wall, the silhouette of a Neblí (from Niebla) falcon, the most conspicuous race of birds of prey in the Middle Ages, shows up in a nook. Cities like Bornos o Melilla flaunted their own subspecies, but none achieved a place in literature and in falconry as much as this one from Niebla. We now go toward the Puerta del Agua, without doubt one of the most beautiful of the rampart, and behind it, barely one hundred metres away, the mass of the Church of Santa María de la Granada. Its denomination was famous for having given new Christians shelter, and some fraternity with this name had to ward off The Inquisition. 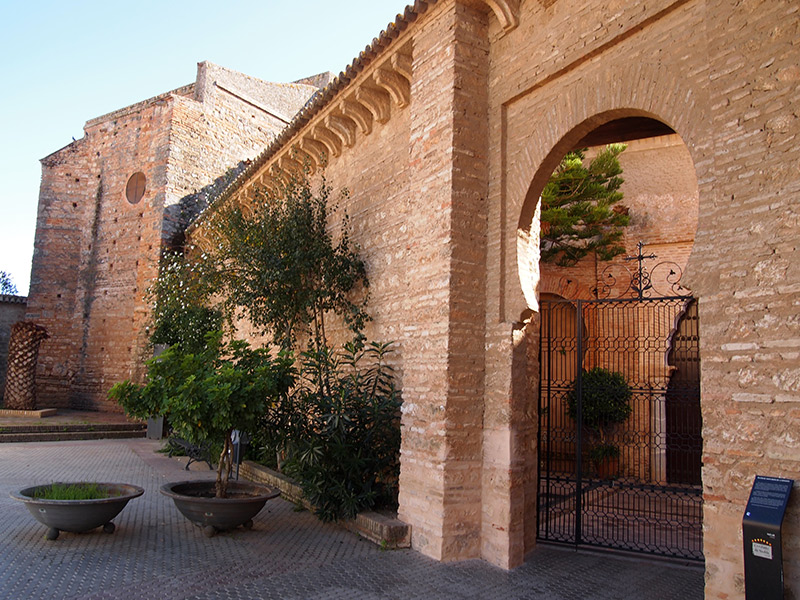 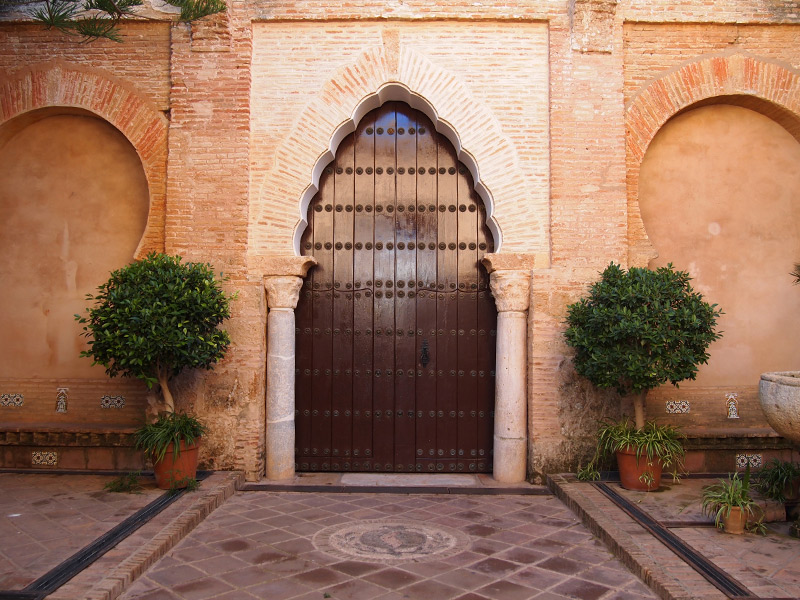 Gate of the Church of Santa María de la Granada.

The images show the church of Santa María de la Granada with its accumulated remains since Roman times: an epitaph, for instance, that if it did not name gods might look Christian; a magnificent baptismal font from that time we call Visigothic; the mosque’s mihrab, its columns, the place for women in the Islamic oratory   ̶ today the Sagrario chapel ̶   the columns and pillars from the first centuries of our era supporting horseshoe arches, and the presbytery with beautiful Gothic vaults.

Walking around the houses stuck to its apse, we reach the square that offers its tower-minaret to the visitor. The church-mosque holds another intermixing very distinct to that of the castle: the blends created by historical upheavals, loves and hates, rules from one part and another: life, in short.

A carved stone seat behind the altar pretends to be from a Late-Roman or Mozarab bishop, but it is not; experts date it in the 15th century, although nobody knows how to explain the purpose of its existence.

Back again to the courtyard, the tower-minaret is still more impressive than seen from the square. In its sections, styles crisscross: the one below the belfry has an air of Abulia or Sicily, and the one that supports these sonorous instruments -clearly providing evidence that it was built when the city was already Christian-  is precisely the one that bears the horseshoe arch.

In Santa María Square, and next to the church, stands what formerly was the hospital of Nuestra Señora de los Ángeles, which today hosts the cultural institutions of the city. The façade of the building shows that late typical Andalusian Baroque from the 18th century, although its Mudejar -style front, built in brick, has been preserved from its former construction. From the original construction, perhaps dating from before 1300, it preserves a chapel with a presbytery in Gothic order, but built in brick, what indicates that the workers must also have been Mudejar, as well as a solid coffered ceiling.

The central open-air nave and apse of San Martín church.

We are sure that under the street pavement that crosses Niebla lies the decumanusof the original site; it takes us to the ruins of San Martín, perhaps the best demolition ever done and will be done in Andalusia. The central nave of the church, which earlier might have been a synagogue or mosque, and was about to collapse at the beginning of the last century, was demolished before what was still standing   ̶ the apse with the belfry and the Cristo de la Columna chapel on one side, and the front door in the opposite–  was declared National Monument by Alphonse XIII.

It seems that the demolition took place simply to create a space in the close-knit urban fabric. However, the result was by default a curious void, unique and odd in an Andalusia that since the Baroque has suffered from “horror vacui”, or the fear of emptiness.

Now, the open-air apse and the Mudejar front with fine lattices, separated by ten metres, create an invisible nave, ethereal but real. It is an aesthetic discovery, such as the Baths of Caracalla in Rome or the Maxentius’ Basilica by the banks of the Tinto River. 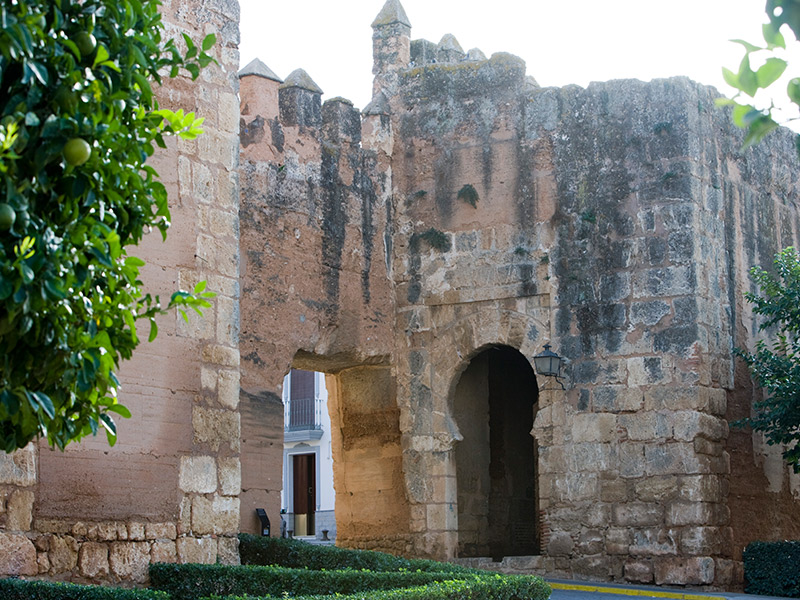 Crossing the Socorro Gate, we start bordering the enclosure again and, as it turns to the left, its red coloured walls blend in with the red waters and stones of this riverbed. Niebla was also called al-Hamra (Alhambra), The Red, many centuries ago.

Close to Puerta del Buey, the posts for electric cables in the solitary and tiny railway station, far from breaking the appearance of plenty of purple and green tones, turns it surrealistic; far beyond, like in a painting by Sánchez Perrier with sound, we can see and listen a flock of sheep. Here and now, we do not know if the passing of time is good or bad.