​Fondón, kingdom of El Rey Chico according to legend

​When we speak of the end of al-Andalus, after the disappearance of the Kingdom of Granada, and the subsequent exodus of the last Moorish inhabitants, the Alpujarra region appears to us as the site of the last act of the Andalusí human comedy.

The motorway layout traces as if drawn with a pen through the plain of Alquife, and it recedes no sooner than we lose from sight La Calahorra, the fortress that was not to be a castle, but a palace —like a Napolitan Castel Nuovo transplanted into this barren land— as soon as the war of Granada ended. From the village of Abla onwards, already in the province of Almería, we must face facts: we are at the foot of the wall of mountains that has always protected the Alpujarra.

The road turns into a snake that weaves though the hills slalom-like until it crowns the Puerto de Santillana. The landscape, dominated by scrubland, makes us believe that Mother Nature did not provide these places with trees, yet this is but a mirage.

The informants of the area for the Diccionario Geográfico-Histórico (Historic-Geographic Dictionary) by Pascual Madoz ̶ mid-19th century ̶ related that in Abla, Abrucena, Tices, Ohanes and Beires, mountains had been filled with holm oaks, but were about to disappear. Of Beires, it was said: “the popular holm oak grove that once was in the mountains of the site has been consumed by the lead-smelting and iron factories located nearby, and only a few holm oaks and bushes grow in the sunny side of the Ohanes River, being scarce even the scrubland that so abundantly produced the soil”.

Sólo en ese otro paisaje boscoso y enmarañado, hoy desaparecido pero que alcanzó a ver en parte Pedro Antonio de Alarcón y plasmó en su obra The Alpujarra, one can understand the bitterness of wars that start as fratricidal struggles among the same Granadan Nasrids, following other one developed by the armies of Castile and Aragon while harassing the Alhambra, and ending up in the Moorish insurrection at Christmas in 1568.

Following the string of the mountains range, we enter into the small kingdom of the Rey Chico, the miniscule territory that the Catholic Monarchs gave in 1492 to the defeated Boabdil, which is actually just a large ravine which runs through the foothills of Sierra Nevada and those of the Mountains of Sierra de Gador and Sierra de la Contraviesa, as if split in two with an axe by the Andarax River. In these landscapes the provinces that host the Alpujarras come together; old roads that run through the white villages that, lying on the slaty soils of launa, fall from the mountain slopes. 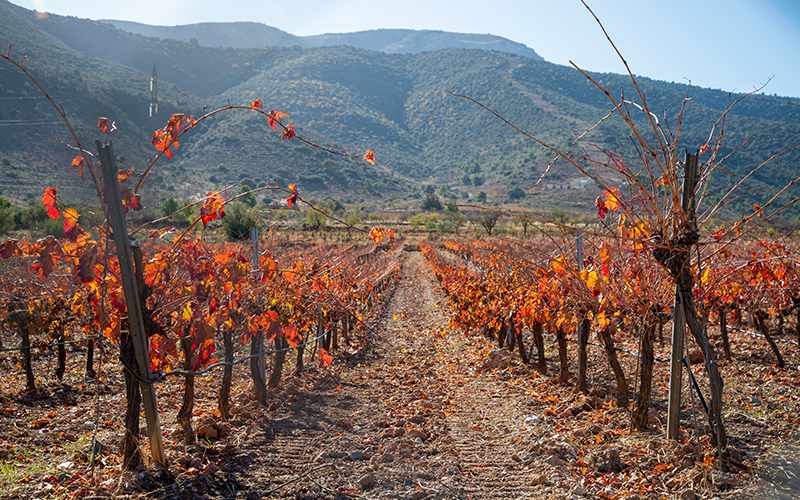 The deepest glens without water

Streams of oleander fields where a sweet thread

Beats deep under the dry terrain

That joins high hills and seas,

Ruins of vineyards and winepresses

A light snow to these winters.

​Before arriving to Fondón, the place towards we are heading, there are countless remains of mining sites just in front of the village; they were those of the lead deposits that exhausted the groves of holm oaks in the mountains around the 18th century, but that helped all the villages ravaged by the massive expulsion of the Moorish in the second decade of the 17th century to survive. Because we find ourselves where the heart of those wars had been beating from the beginning. Farax aben Farax, one of the rebel warlords, put to the sword every Castilian in the area: the place’s name Rambla de los Mártires (Watercourse of the Martyrs), in Fuente Victoria, recalls it so.

Monument built in honour of the miners. ©Ayuntamiento de Fondón.

Throughout the 19th century, labour in the mining operations gave rise to a rich folklore that had its poetic foundations in the trovos and its reciter in the tarantos, the variety of flamenco that put the nickname of the people of Almeria in the orbit of flamenco. Although both can be still heard in private gatherings, these has been lost in public performances. They do not make up part of today’s consumer music.

Churches were burnt excepting that one in the nearby hamlet of Benecid and, from the other side, there was a response with the same callousness until Don Juan de Austria arrived and settled into that village calling it Presidio (prison), not because of the meaning that the word has today as a synonym of a jail, but because it was the military headquarters that presided over daily operations.

The coat of arms of Fondón bears a holm oak, a tree with a big crown from the Farm of Hacid ̶ also named de las Paces, “of the reconciliations” ̶ where all tales locate the site of the capitulations between the brother of Charles V ̶ whom Father Coloma promoted as Jeromín Jeromín in his novel of the same title— and Abenaboo, the last kinglet of these lands. This event took place on May 13, 1570.

The monumental fountain built during one of the mandates of the Illustration, in the troubled times of Charles IV, was the mean to make the population aware of the importance of public health.

The church, built with the forward-looking perspective lent by eternity ̶ a formidable, artificial elevated plain ̶ remains unaffected by earthly contamination. It is haughty. A lane, covered by the vault that is part of an arch, allows us to go around the church and the fountain to get to the walls of the Baroque side-chapel of the image of the Cristo de la Luz, much more splendid than the interior of the temple, whose series of roofs give the exterior an unusual view in the Sacristía street.

Side façade of the church of San Andrés, in front of Town Hall

In front of the main door of the church, stand the buildings put up during the Enlightenment, and a bit further from this is the Granary. By its side, there is an arch, which surely was the village gate until the final years of the “small kingdom.”

In a small square, the Fuente Chica (Little Fountain) is not as pretentious as that of Charles IV; its simplicity shows graceful shapes, and its waters, moreover, help quench thirst in the heat of noon.

Going down towards the river we discover some small reminiscences of the past: a beautiful tinao of the purest style of the Alpujarra, minuscule crosses hammered onto a rock or an old beam that somebody turned into a street bench… Some vines still proclaim the vocation of the village in the 19th century, the “boarding grape”, or grapes destined for the tables of England, maybe belonging to the relatives of the engineers of those mines from which they continuously extracted lead from the bowels of the earth hard-won.

In the distance, Laujar de Andarax spreads down over a soft slope and, between it and us, the Fuente de la Victoria. The Rambla of Maimón or of El Gallo separates us, and a graceful bridge brings us closer. In this hamlet (which belonged to Laujar for a long time) there is a square, near the road and facing a big house looking like the mansions of the parreros (grape exporters). Here we find the fountain that gives the name to the city, and its church, which was devoted to Santa María la Mayor.

Some decades ago, the Casa Grande in Fuente Victoria was named Palacio del Rey Chico, on the basis of information from Martín Delgado, a poet and archivist of Almeria. Yet, in consulted historical records there were found no references concerning this fact, nor in the Libros de Repartimiento (Territory Division Books) after the fall of al-Andalus, nor in the descriptions that the Romantic travellers made in the 19th century of these spots.

In fact, the house was built in the 18th century by the Palomares family. This is a house of a quadrangular ground plan, standing two storeys and a third in the main façade that includes a lookout tower. In its interior an inner porticoed courtyard gives access to the different rooms.

There below, on the other side of the Andarax River, the hamlet of Benecid relaxes under the sun, like old people do in front of the church, the one which was saved, and nobody knows why, from being burnt in the uncertain times of the second half of the 16th century.

Halfway along the road, between the two hamlets, there is a campground, and the summertime facilities bring music and the shouts of children while bathing. Their roars spread among the vineyards and the fields far beyond, until they bounce off the escarpments of the hills that support the Sierra Nevada.

This was the landscape that Gerald Brenan traversed when he travelled from his Yegen to Almería. He was forever enamoured by it, and he sang to it with words maybe not very gentle ̶ of an apparently phlegmatic Englishman ̶ but full of affection.

We travel the road again in the opposite direction. We ascend along the first slopes when the fireworks in the procession of the Cristo de la Luz (Christ of the Light) break the afternoon air without intermediaries or competitors. The valley, its silence only broken by the goats’ bells, now takes the form of that setting where García Lorca planted the characters of his dramas.