How lazily the sun goes down in Granada, it hides beneath the water, it conceals in the Alhambra!

UNESCO’s Mediterranean cultural world heritage is calling for new techniques able to improve its level of interpretation, and to do so it must take advantage of new technologies and commercialize the latest research results.

In this sense, iHERITAGE will provide new solutions through an innovation-driven growth process to encourage cross-border technology transfer, Living Labs, collaboration between industry and academia and the creation of spin-offs and new products, using the latest Information and Communication Technologies (ICT) such as Augmented Reality (AR), Virtual Reality (VR) and Mixed Reality (MR).

The project will also focus on socio-economic challenges at cross-border level through the active participation of young people, unemployed and other communities who will collaborate actively to the Living Labs (living lab) and training courses, as well as in the creation of spin-offs, favouring the increase of employment opportunities and the development of innovation.

The project will encourage collaborations between universities, SMEs, start-ups and spin-offs dedicated to the creation of AR/VR/MR products. Finally, iHERITAGE will work on the compilation of UNESCO Mediterranean cultural heritage elements.

Holography on the evolution of the gardens of El Generalife

The exhibition has been developed and devised by El legado andalusí Andalusian Public Foundation within the framework of iHeritage Project, ICT Mediterranean platform for UNESCO cultural heritage, which is co-financed by the European Union through the ENI CBC MED Programme.

Curated by the artist María Teresa Martín-Vivaldi and the Botany University Professor José Tito Rojo, the exhibition reflects on the values of the garden, as well as the numerous connections existing between European gardens, with special emphasis on the gardens of the heritage of al-Andalus and the Mediterranean.

The exhibition combines the concepts of garden and heritage, as reflected in the very title. It is an invitation to visitors to reflect on the garden as an ornamental and heritage element We will immerse ourselves in real and imaginary gardens, made of paper, stone, sound and music, gardens for children, gardens in engravings, in painting, in photography, gardens that have inspired all the arts, and even gardens recreated using the latest technologies, along the lines outlined by the European project iHERITAGE.

There is room for very diverse elements, which despite their heterogeneity, dialogue perfectly with each other: we will find real plants, of course, but also works of art, ancient photographs, museum objects, books, and as a differentiating element, high-tech devices, such as holographies and virtual archaeological reconstructions that will show the latest results of research in heritage sites recognised by UNESCO. 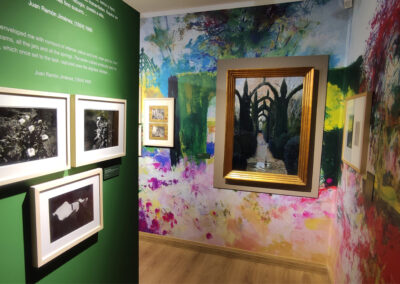 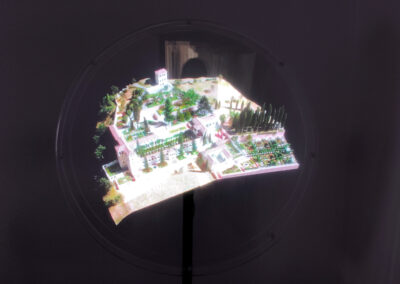 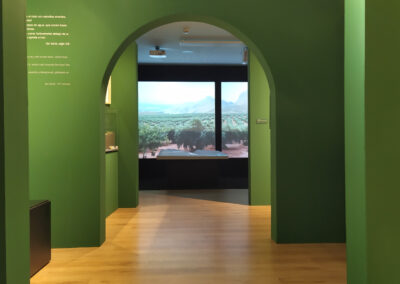 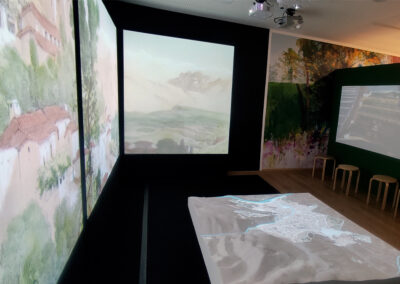 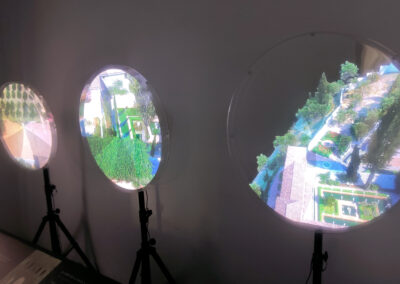 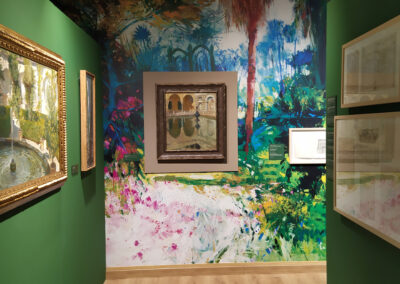 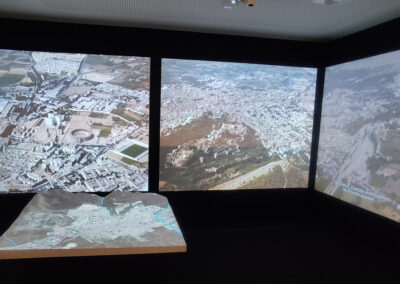 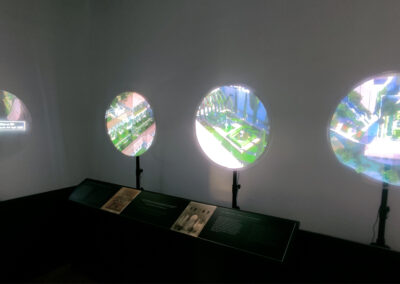 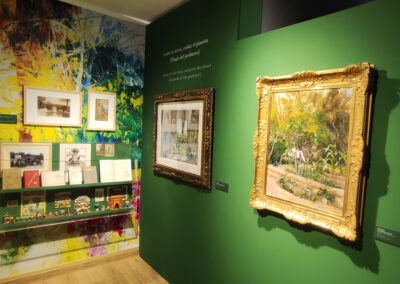 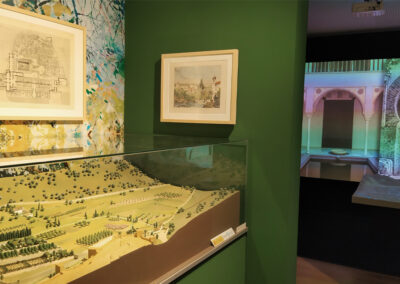 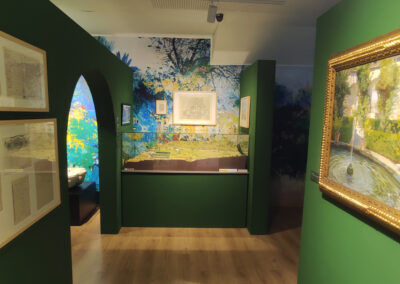 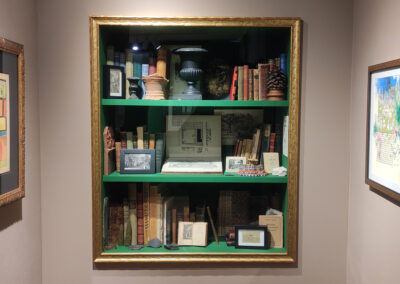 “The interpretation of World Heritage in Andalusia in the 21st century. Advanced technological solutions in the world today”

Living Lab in the frame of the European project iHERITAGE ICT Mediterranean Platform for UNESCO Cultural Heritage with the co-financing of the European Union through the ENI CBC MED Programme.

The living lab was organised by the Andalusian Public Foundation El legado andalusí (Andalusian Regional Ministry of the Presidency, Public Administration and Interior of the Andalusian Regional Government) with the co-funding of the European Union through the ENI CBC MED Programme (iHERITAGE project: UNESCO’s Mediterranean Platform for Cultural Heritage).

The course, designed by the Descubre Foundation, has been coordinated by the Andalusian Public Foundation El legado andalusí and Descubre Foundation with the collaboration of the Scientific Culture Unit of the University of Granada. It was aimed at a varied audience, which included the educational community (undergraduate and postgraduate students, teachers, secondary school students, etc.), art history professionals, tour guides, personnel from the fields of economics and business and, in short, any person interested in new technologies, tourism, art or mathematics.

Throughout the last year, the Foundation has been engaged in the creation of the REIM, in consonance with the “Convention for the Safeguarding of the Intangible Cultural Heritage” adopted by UNESCO on 17 October 2003 and in the Regional Centre for the Safeguarding and Valorisation of the Intangible Cultural Heritage of the Mediterranean (CRESPIEM), which will be recognised as UNESCO category 2.
The REIM will consist of a transnational action that, in the form of a web platform, will provide access to and will promote the Intangible Cultural Heritage resources of the countries of the Project Partners, elements inventoried in local, regional and national registers. The main objective is to provide a homogeneous, integrated and unitary interpretation of the Mediterranean Intangible Heritage, not by providing a simple database, but by offering a collaborative tool for the integration of the Mediterranean Registers, an instrument of dissemination and transmission, always aimed at the promotion, protection and safeguarding of the intangible heritage treasures of each region.

Among the venues of the exhibition there is a holographic room where, on four simultaneous holographic helixes, an evolution of the Generalife Monument (World Heritage Site) throughout history in 3 stages, is projected and also, for the first time, the 3D-reconstruction of a manuscript from the period of al-Andalus.
The holographic creations produced by other project partners will also be screened in this room, as it is currently being done with the holographic reconstruction of various Arab-Norman constructions in Palermo created by the University of Palermo (PP9 of iHERITAGE).

In the exhibition Gardens, Heritage and Dreams, the visitor will also have the opportunity of enjoying the detailed screening of the 3D-virtual reconstruction of the Almunia (farmstead) del Chapiz, located in the Albayzin neighbourhood, recognised by UNESCO as a World Heritage Site.

Also, in one of the exhibition rooms Gardens. Heritage and dreams we can admire the screening of five 360º-videos filmed in various locations of the gardens of the Generalife which, together with the Alhambra were recognised by UNESCO as World Heritage Site.

They will be the framework for collaboration between public institutions, researchers, universities, academies and business innovation centres, SMEs and spin-offs to foster the development of innovative products and services. They will be intended for commercialisation, technology transfer and the training of professionals and researchers in entrepreneurial skills.

The Living Labs will establish the basis for the Research Agreements that are being materialized between iHERITAGE partners and institutions with the aim of developing innovative products on monuments and sites declared World Heritage Sites by UNESCO. To this purpose, El legado andalusí Foundation has drawn up a model research agreement that has set a starting point for the rest of the partnership.

• ASCAME (Association of the Mediterranean Chambers of Commerce and Industry, Spain)

• General Department of Antiquities of Jordan