Cultural Itinerary of the Ibero-American Mudejar and Baroque

The Cultural Itinerary of the Mudejar of El legado andalusí is born with the intention of disseminating the Spanish culture, to promote the relations between Spain and the Hispano-American countries, together with the preservation, the knowledge and the dissemination of a common cultural patrimony.

This initiative has as a main aim to establish the layout of a cultural road, to disseminate the Spanish cultural and artistic patrimony, focusing on the monuments and works which serve as the testimony of the Moslem presence and influence in America.

This American scope will be structured ,in a first phase , by creating a guide-catalogue complete enough so as to be able to disseminate and to inform about the layout and the patrimony included all along the itinerary, always taking into account that the wide tour does not only refers to Spain , but also to Portugal, the Atlantic Islands and Ibero-America. This Itinerary has been materialized in the works: “Synthesis of cultures. Mudéjar”and “Hispanic and American Mudéjar. Itinerarios Culturales Mexicanos” (Published by El legado andalusí Foundation in 2004 and 2007).

In all the studies carried out, the presence of Arab-Islamic civilisation in Latin American peoples is highlighted, a legacy incorporated and transformed today due to American influences and the numerous contributions of local cultures. This Andalusi heritage is still present in America today but transformed and recreated through successive blendings.
The Cultural Itinerary of Mudejar is not limited only to architecture, but also takes into account other Muslim influences such as painting, sculpture and the useful arts, the latter including colonial furniture with Islamic roots that is present in many houses.

The Cultural Itineraries of the Baroque show a general view of this art in Ibero-America regarding its urban, architectonic and artistic aspects. The cultural synthesis that took place in Latin America was enhanced by the Baroque and gave rise to the most varied proposals of American colonial art. Combining European Counter-reform ideologies with elements from the indigenous world, a series of architectural ensembles of great artistic value were created. America’s capacity for integration was manifested in this style, which brought together, under its umbrella, urban planning, architecture, sculpture, mural painting and gold and silver work. 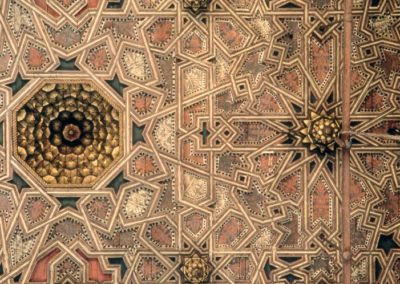 Crossing of the cathedral of Funchal (Madeira)

Detail of the ceiling of the Church of San Francisco, Tlaxcala (Mexico)

Ceiling of the Music Conservatory of Puebla, Mexico 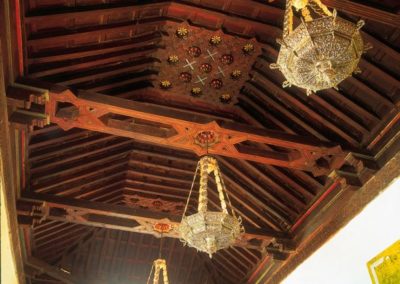