Cultural Itinerary of the Almoravids and Almohads

The Cultural Itinerary of the Almoravids and Almohads, promoted by the Foundation The legacy of al-Andalus, is expected to guide travellers interested in history, art and culture along the remaining traces, monuments and memories of the past, still visible nowadays in these routes, which were travelled in the past as they are travelled in our days.

The roads that covered these two African dynasties alternated on both sides of the Strait of Gibraltar. Throughout the 11th, 12th and 13th centuries, the great dynasties of the Almohads and the Almoravids created a strong and powerful empire, which stretched from the Senegal, Mauritania, Mali, the Maghreb and the Iberian Peninsula as far as the river Ebro’s estuary and the western Mediterranean Sea. The intense relationship between the two shores of the Mediterranean has resulted in an important number of people mixing races and cultures, whose traces can be seen today, since what was essential has remained, after going through the clashes that have taken place all along history, and it is a common cultural and artistic patrimony that endures.

Routes of the Almoravids and Almohads… Can we describe them without continually referring to what the ancients once called “the Two Shores”, -al-Adwatayn-? To both sides of the Straits, multiple paths alternated and crossed with each other, weaving indescribable ties between men. As a result of these multiple contacts, often shaped by an alliance or a clash, we have inherited many things, and, above all, a specific way of living. But let’s ask a question: What was the right location of those routes in those times?. Let’s see the world map from the 12th century, drawn by the geographer from Ceuta, al-Idrisi, and let’s observe it from Marrakesh, the capital of the Almoravid and Almohad empires. We will try to establish a relationship between the cities that are mentioned there, and we will also see two outstanding axes of roads, south- and north- bound:

The first one begins in the “Desert of the Veiled Men”, as historical sources have called the vast expanse of sand that is currently found in Mauritanian territory, the cradle of the Almoravid movement. From the caravan towns situated to the north of the Niger and Senegal river basins, such as Awdagust or Azugui, the tracks of the trans-Saharan trade took off towards the plains of the Moroccan Atlas. From Agmat-Urika or from Marrakesh, our tour crosses the Tadla, heads for Mequinez and Fez to get to the Mediteranean ports of Ceuta, Qsar Segir and Tangier. From there, it is replaced by the Routes of al-Andalus at the exit of Algeciras. We agreed to call this route the “Route of the Almoravids” because, at that time, it was the way of the trade caravans that linked sub-Saharan Africa with the Mediterranean shores through Siyilmasa, the bridgehead for this traffic that was based on African gold. Here, we can also bring to mind the emirs from al-Andalus, al-Mutamid of Seville and Abd Allah of Granada, who were led to exile through this same road.

The second of the axescovers the Atlantic plains and leads to the ports of Safi, Tit, Azemmur, Anfa, Fedala, Rabat and Salé, which were then starting to develop. Rabat is the connection-point of this network, which is, by the way, an Almohad creation. Beyond this point, the route is oriented toward Qasar el-Kebir, an intersection that joins Tangier with the Mediterranean ports and the trading network of Fez. All these systems are connected, at the same time, with al-Andalus. This second axis constitutes the “Route of the Almohads” par excellence. Traffic became safer thanks to the definitive elimination of the Barghawata principality by the Almohads, which had stood as a screen between the Atlantic plains of the north and those of the south. It was the need to supply the cities of al-Andalus with provisions –such as cereal, cattle and other raw materials–that greatly contributed to increase and multiply the maritime exchanges between the Moroccan Atlantic ports, and those of the low-lying Andalusian lands.

These two axes, as defined above, flank the Atlas Mountains and join at Marrakesh. According to Ibn Khaldun, “here merchants who came from everywhere met”. The Hispano-Moroccan main roads network that spread through the natural and historical routes that are the Atlas valleys branch here into the caravan roads of the Trans-Saharian and African trade. Tinmel, birthplace of the Almohad movement, has a fortress from which the Nfis valley was controlled, being also an important link to the South. This place knew at those times its greatest moments of glory.

Overall map of the Cultural Itinerary of the Almoravids and Almohads 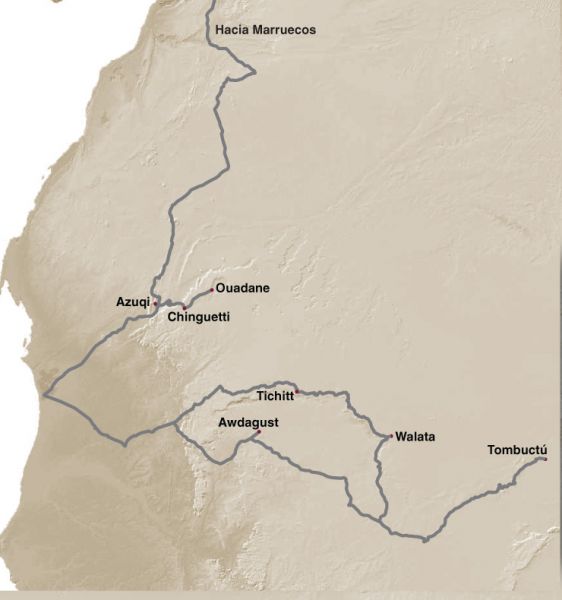 This itinerary crosses the desert of the veiled men, the birthplace of the Almoravids. In this sea of sand, it follows the trail of the camels that loaded the African gold, salt, slaves, ivory, furs or ostrich tails.

It stops at two towns now disappeared: Azugui, a bastion of Almoravids settled in the middle of a beautiful palm grove, and Awdagust, the bustling capital of the Berber Sinhayachs, where the remains of the town lie buried on the sand. The route then reaches the ksars of Chinguetti, Wadan, Tichitt, Walata, the “desert ports”.

These ancient cities, declared Patrimony of Mankind, keep alive, each in their own way, the graceful vernacular architecture of Western Sahara, a space where merchants and wise men, people and cultures from different horizons met.

At the heart of this route is Marrakech, the metropolis that gave its name to Morocco. It is the starting point for many roads, weaving around it a network full of history that can easily be followed today using the national roads.

To the west, the route includes two Atlantic ports, Safi and Essaouira; to the north, the archaeological site of Sidi Bou Othmane; to the south, the High Atlas, with Agmat as the first step towards the mountains, and Tinmel as the last step on the historic route. Between the ocean and the mountain, the path allows us to gaze at the indelible Portuguese influence in the coastal cities; the solemn birthplace of two great empires of Western Islam; lots of different kinds of lands that adopt many hues from green colour to lilac, and where olive, apples, almonds trees and walnuts grow together and mingle. 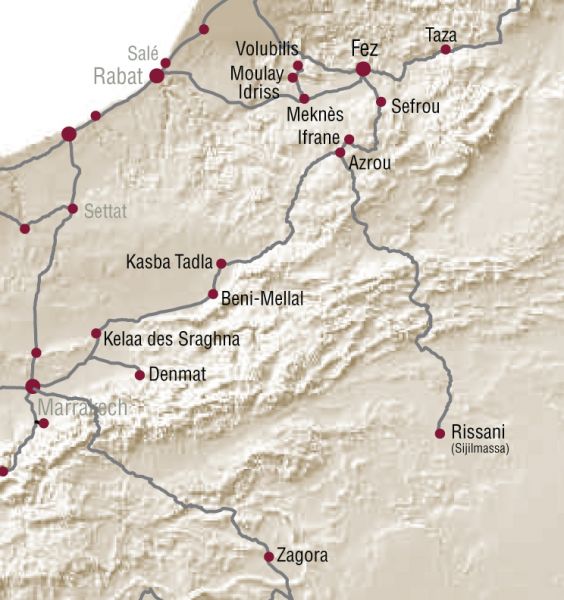 In the heart of the Tadla plain, between Marrakech and Fez, the route follows the tracks of the Almoravids. The Saharan warriors, in order to take over a huge empire, had to control first this major artery, of vital importance due to its strategic location. In ancient times it was named Tariq al-Makhzen.

For centuries, it has been marked by imposing kasbahs, sentries in the foothills of the Atlas Mountains, and leads to the banks of a city brimming with culture and refinement, where the most varied artistic and intellectual currents from both the West and the East came to the Muslim world: Fez. Beyond, Meknes, a former sovereign city, reveals its extraordinary heritage: a sky lit up by its minarets and the unique pyramid-shaped vaults of its palaces. A land where the olive tree grows and Malhun, the popular sung poetry whose distant resonances evoke al-Andalus, flourishes.

Itinerary 4. Through the Atlantic plains 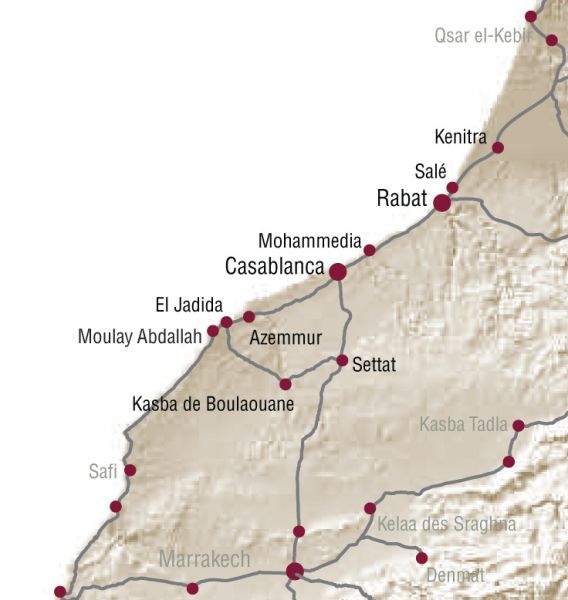 Between Marrakech and Rabat, we follow the footsteps of the Almohads, letting ourselves be carried away by the Atlantic plains. In these spots, the Almohads stop to found the “Camp of Victory” -as they first referred to Rabat- before continuing their unstoppable march beyond the Strait of Gibraltar.

These oceanic coasts, on their turn, got several waves of moriscos and people from al-Andalus in exile. They were coveted by Portugueses, Spanish, Dutch and many of their villages were got to become principalities, being independent from any central power. Two of these cities are Morocco capitals: Casablanca, the economic one, and Rabat the politic. The route travels superb fortresses which watch the ocean, the coves of the corsairs of old, and the labyrinth of its medinas, where the traditional Hispano-Moroccan jobs still remain.

Itinerary 5. The way to the Straif 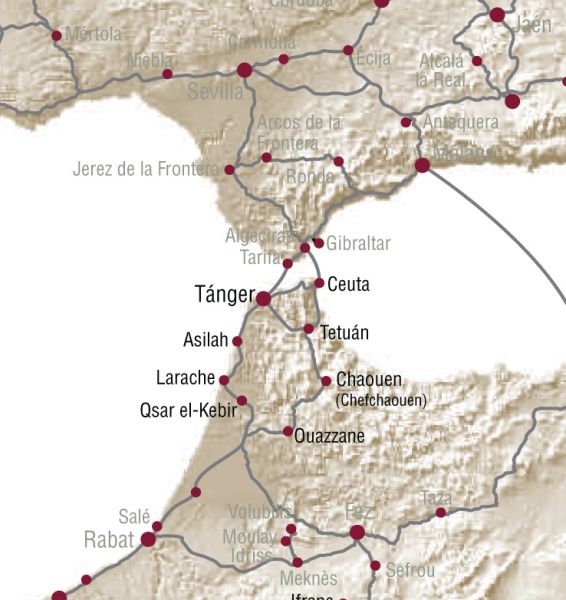 From the coast or inland, all routes converge on the Straits and its two ports, Tangier and Ceuta, which will be springboards for all incursions into the subjugating country of al-Andalus. Before crossing Bahr al-Zuqaq (Sea of the Alley), the route first stops at natural sites such as the Blue Lagoon of Merdya Zerga, once a favourite hunting reserve of the Almohad caliphs.

There, facing the Atlantic, Larache and Asilah combine monuments from two civilizations where mosques and madrasas rub shoulders with Hispano-Moorish palaces. Before getting to the point, it is necessary to proceed to a substantial cultural immersion into two cities which are impregnated of the legacy of al-Andalus; Tétouan and Xauen, which during centuries received large crowds of immigrants from the opposite shore.

Itinerary 6. From the Strait of Gibraltar towards western al-Andalus 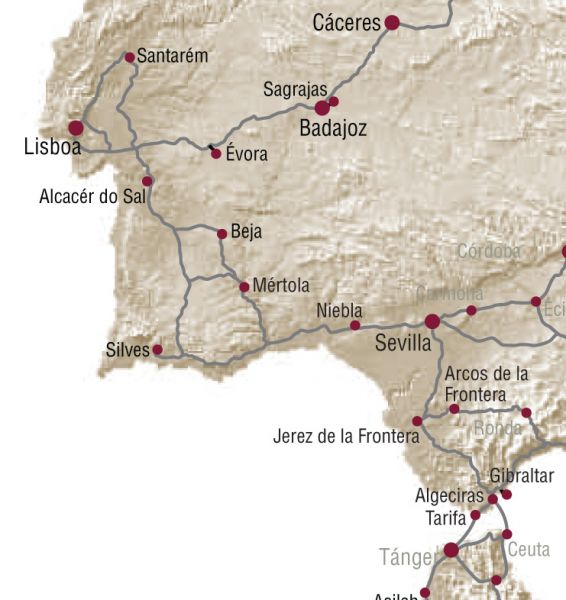 The Itinerary of the Almoravids and Almohads, as going up towards North, cross the Strait of Gibraltar to start the journey through the northern shore –the land of al-Andalus. The first cities to be seen are the Strait ones, the communication key between the Maghreb and al-Andalus.

The road advances into the undulating horizons of the Jerez and Arcos de la Frontera country sides to get to the thriving Seville, the great trading centre of the epoch and capital of the Almohads, together with Marrakesh. The Itinerary continues on his way through the lands of Huelva, Portugal and the region of Extremadura. Then, it turns to the rivers valleys of the Guadiana and Tajo, whose line marked the limit of the Almoravids and Almohads expansion in western al-Andalus.

Itinerary 7. Through the Guadalquivir and the Castile plateau 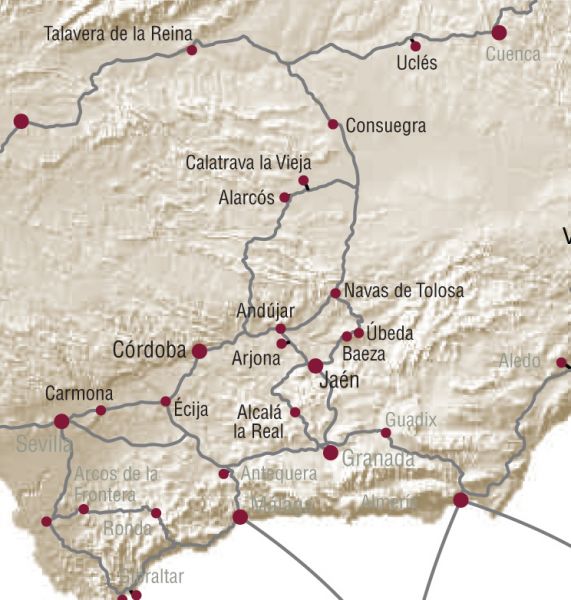 This route follows the main communication route between the Guadalquivir Valley and the Castilian plateau, a historic road for armies and civilizations to and from. It starts in Carmona, continues to Écija and gets to Cordova, mother of all the al-Andalus cities, and main of communications junction inherited from Romans times. The Cordoba and Jaén countryside get together to climb up to the Upper Guadalquivir river following an itinerary that runs through monumental cities, frontier towns and castles.

Our way overcomes the obstacle of Sierra Morena, to reach the landscapes that once were the background of great events of the Spanish medieval history: Alarcos, Navas de Tolosa, Uclés… 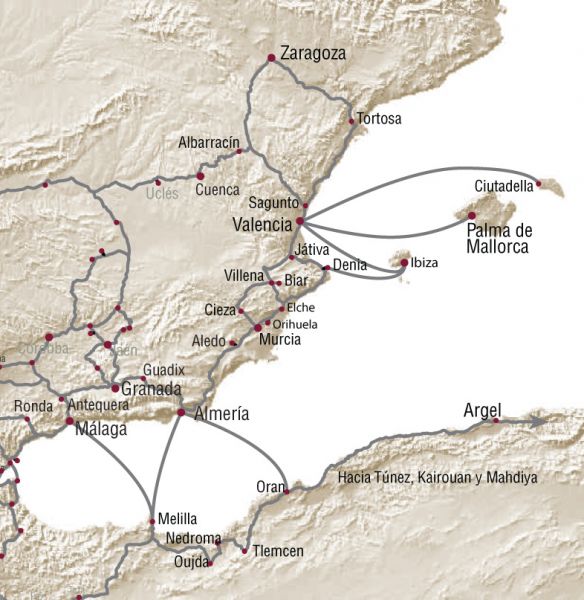 Departing from the Strait of Gibraltar, there is another branch of a great importance in the Route of the Almoravids and the Almohads within the domains of al-Andalus. It is the one which goes East and West bound searching the confines of the North-African empires. The first part of this itinerary goes through the cities that made up the Nasrid kingdom, the last refuge of al-Andalus: Ronda, Antequera, Malaga, Granada, Guadix and Almeria.

A second branch follows towards East, a territory filled with medinas, castles and ports. We follow historical routes where this itinerary getting round the fortress of Aledo, go across the fertile plains of Murcia to get to Valencia. Finally, the route approaches the eastern and northern limits of al-Andalus in the 11th and 13th centuries: in the Mediterranean, the Balearic Islands; inland, Cuenca, that linked the centres of power of the Central Plateau with the Levant; and towards the Ebro Valley, Albarracín and Saragossa. 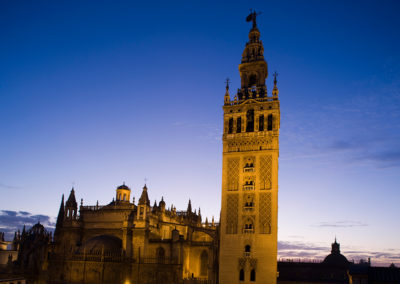 Overall view of the Catedral and the Giralda. Sevilla.

Overall view of the Catedral and the Giralda. Sevilla. 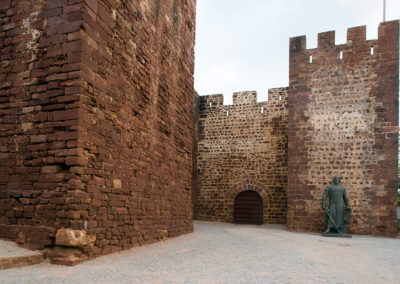 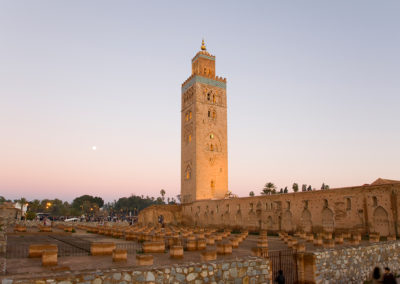 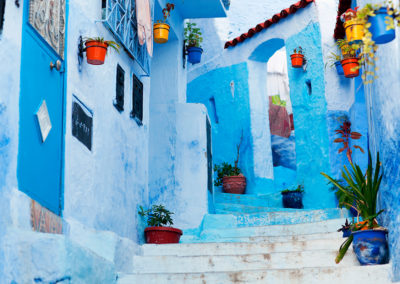 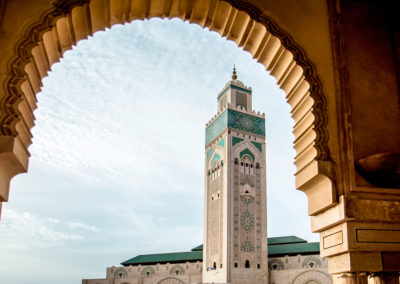