The Moorish house of Zafra, settled in the lower Albayzin quarter, will host this exhibition, consisting of ten works by ten artists born in Andalusia, who render their own vision on the Routes of El legado andalusí.
Almost all of the authors of the works attended the inauguration, who, twenty-five years later have revived the launch of a pioneering project in Andalusia, precisely in a new stage in which El legado andalusí Foundation is consolidating itself as an essential tool for the dissemination of culture and heritage through cultural and sustainable tourism. The event was introduced by the Mayor of the Granada City Council, Mr. Luis Salvador and the Director of the Foundation, Mrs. Concha de Santa Ana and was attended by numerous representatives of the cultural and academic world, as a sign of support for the new stage of the Foundation.
In the Routes of El legado andalusí there are nine cities listed as World Heritage by UNESCO, whose Declaration of Principles of International Cultural Cooperation is supported and subscribed by the Foundation through its main aims: to spread knowledge, stimulate vocations and enrich cultures, develop friendship between peoples, leading them to a better understanding of their respective ways of life, make knowledge be accessible to all people, so they can enjoy the arts and letters of all peoples, they can benefit from the progress achieved by the science in all regions of the world and from the fruits that derive from them and can contribute to the enrichment of cultural life.

The Council of Europe declared The Routes of El legado andalusí as Cultural Itinerary of the Council of Europe in 1997, having as objectives the promotion of cultural and rural tourism, traditional arts and crafts and the protection and restoring of the monumental, environmental and artistic heritage. 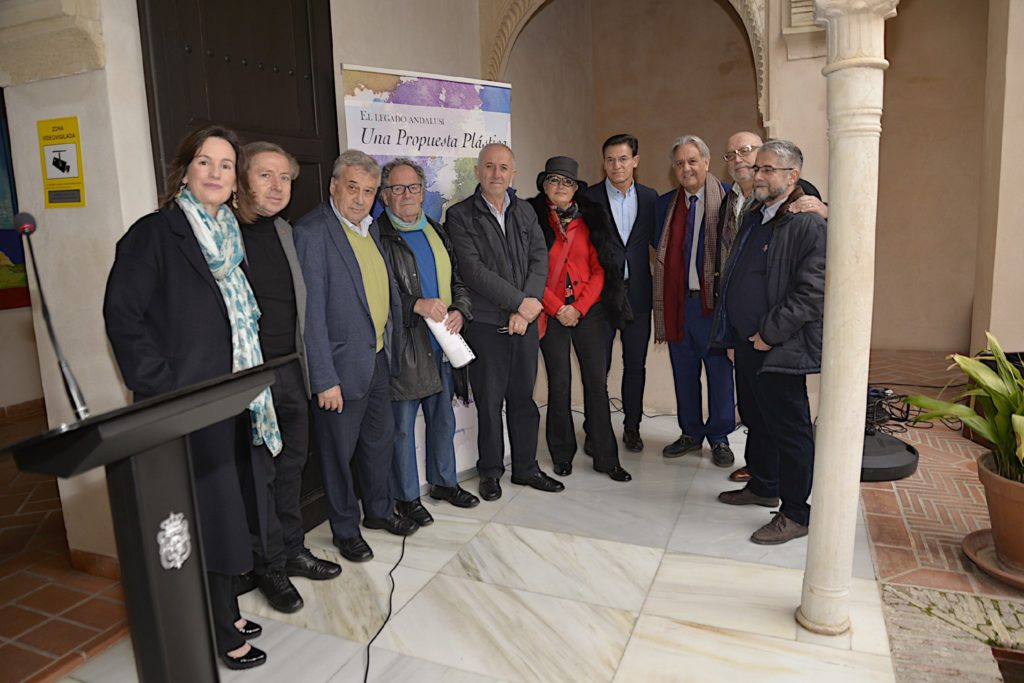 On these bases, the exhibition –entirely composed by works belonging to the Foundation’s own funds– suggests an amazing tour along the Routes of El legado andalusi, of which the artists have portrayed different interpretations, either depicting the landscapes, evoking the name of the routes, or illustrating their historical connotations, paying attention to their respective formal and technical languages. In this sense, the techniques used range from oil to collage, compositions on metal support, burlap, or the use of materials of different textures such as a polychrome cluster of stone and earth, as in the case of the technique called “petral” by the artist Xaverio, who uses sediments found in the lands of the Alpujarras region, the route represented in this work. Alejandro Gorafe on his part, uses a habitual material in his artistic production: die-cut recycled metal, to recreate the geometry of the lattice work or musharabiyyas of Arab houses. Martin-Vivaldi transfers the unmistakable colorism of her works to her representation of the castle of Salobreña, the emblem of al-Andalus Salambina. The geometry reflected on the surface of the ponds in the Arab gardens is seized by Rodríguez-Acosta and tinged by the warmth of his brush. The Romantic symbolism of Juan Vida narrates the vision that Leon el Africano could grasp as a child on his way to the coast of Almería through the lands of Guadix towards Africa.