Venice, the temptation of the Orient

In the 15th century, many were those who fell into the spell of that labyrinth of alleys where no Minotaur menaces us. In Shakespeare’s times, as today, Venetians, commiserated with the stranger who asks for directions over and over, saying only, without even a spot of arrogance, while looking towards the maze of fundamenta and sottoportegui: “Sempre dritto”.

As always, Venetian pragmatism has made of the city a cosmopolitan centre. In its paintings often show Turks, Moors wearing turbans, Blacks, and in its best times, the city was like a caravanserai where Greeks, Turks, Armenians and Jews had their own quarters and businesses. The peninsular “shylocks”, who possessed a synagogue in the Venetian guetto, were able to buy and sell in Spanish. For the Sephardi who arrived at the end of the 15th century, life in the city might have meant a way to continue and expand the experience that they had already lived in Spain, where a strong intercultural relation among Jews, Christians and Arabs had been possible. Apart from that, in the course of centuries, the thinking of East and West had intertwined tightly. Dante Alighieri, in the Convivio, did not hide that he was in debt to Arab thought, quoting in particular Ibn Sina (Avicena), as one of his inspirations and masters. 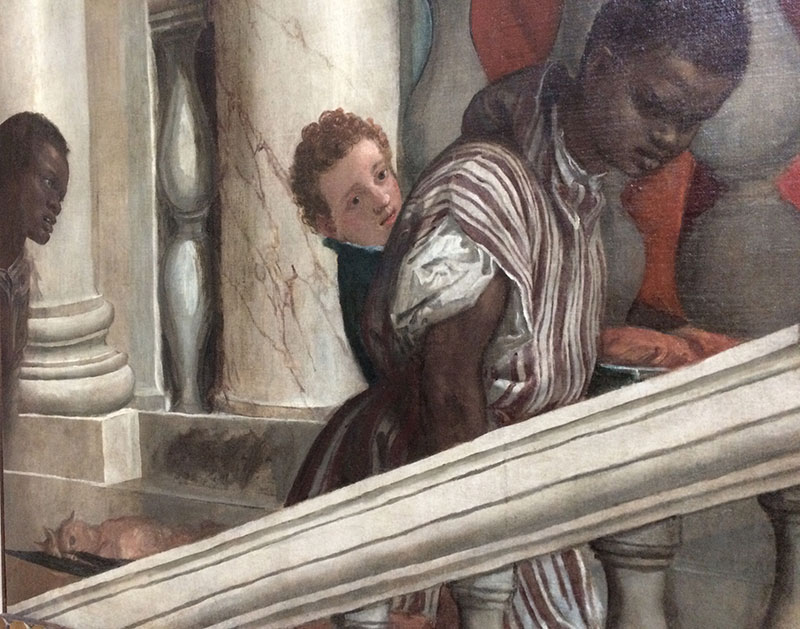 Detail of the work “The feast in the house of Levi”, by Paolo Veronese

Régis Debray, in his invectiveagainst Venice, describes the Sereníssima as an image of an insular Europe of the future, pruned back to the picturesque, indifferent to its space and time, a centre spinning on its own axis like a crazed machine. It is one of those invisible cities, as those described by Italo Calvino: “Forced to remain still and just being itself so as to be best remembered, the city languished, shed and disappeared.” 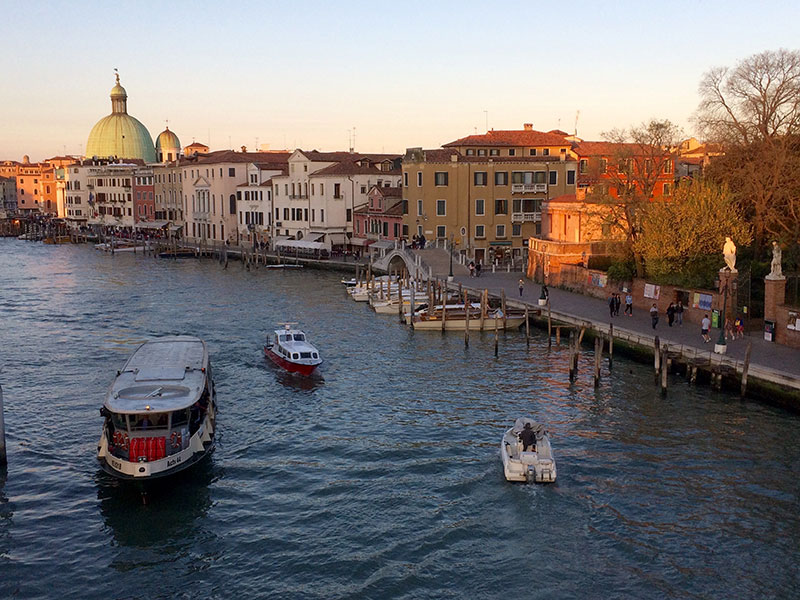 Image of the Grand Canal

One beautiful misty morning, from the top of the Campanile, surrounded by Germans, Japanese and Hungarians, I liked to imagine it rather like a Tower of Babel, but not as punishment, rather as meeting place, a kind of free city as in the time of its frantic carnival in its golden age. An almost imaginary place where books (a beautiful edition of the Aristotle’s Metaphysicswith comments by Averroes; Machiavelli’s The Prince, Marcel Proust always In the shadow of young girls in flower…) could talk among them, in these times of dispute, leaving aside the possibility of the world as a compendium of closed universes.

In between the domes of Saint Mark’s basilica, the centuries have passed creating the myth of a city extraordinary, powerful, decadent, evanescent and eternal. Venice is an ocean of art which, in our days, does not live from its power, but from its beauty; from that crepuscular beauty invented by the Romantics: the Venice of starving cats, of palaces rusted by water, of impossible loves and withered splendours. Travellers still arrive to relish a present made out of the past, with an air of aftermaths, of a vital need to risk its life. Flirting with Death in Venice, or listening, sustained by, Mahler’s adagio, visiting the Marine Graveyard, being carried away by a boat which is not that of Charon ─for we return─ is now accessible to all. Venice is the “Thousand and one nights of Europe,” as André Malraux said. Yet The Thousand and One Nights is but a picture book today: the baroque façades of the churches, St. Mark’s quadriga that has so much seen, the majesty of Tiziano, the fabulous dark backgrounds of Tintoretto, the dark blood of Giorgione’s women, Veroneses’ buffoons in his Last Supper.

The feast in the house of Levi, (1573) by Paolo Veronese. Academy of Venice Gallery.

I step away from the Sereníssima and the canals, those arms of the sea with a different taste: that of the adieu. A traveller is the one who is forced into another world because he cannot change the world. There is no way to explain the seduction of Venice, yet this has perhaps something to do with that mirage. The Lagoon is a border area which marks the breakdown with our tempo, with our rhythm: it is the island out of the world that cherishes memory and oblivion. We feel compelled, like Alice in Wonderland, to break through to the other side of the mirror, where life is lighter, and becomes theatre, a performance, where clocks are briefly suspended. The powerful and delicate palaces created by an aristocracy of merchants, are now abandoned and inhabited by ghosts: Casanova, Wagner, D’Annunzio, Stendhal, Sand, Proust, Hemingway, Byron. What is the secret that the city can unveil as a metaphor for humanity? Splendid and decadent city, it prefers the aerial to the firm, the mask to the face, and the thousand facets of lie that also include truth: the Venice of crystal and crepuscule, as Borges imagined it. Perhaps its stone palaces are but their reflection, in the sky, of the true palaces in the water. That is what remains in my memory: a parallel city, specular, changeable and ephemeral, which trembles at the slightest breath of wind. The white stone from Istria, the pink marble, Titian’s red which Goya went chasing, all are mirrored on the Lagoon: we are gliding in the sky. 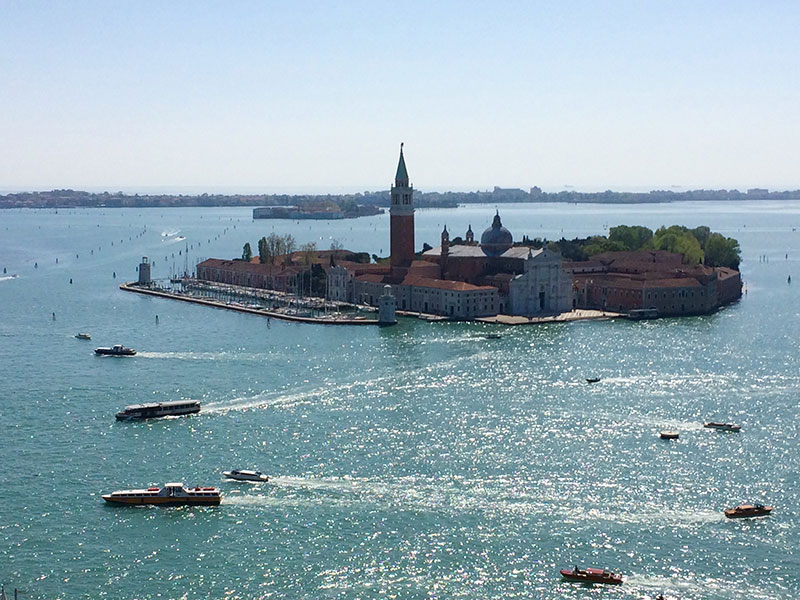 TRAVELLERS AND TRADERS IN THE NASRID KINGDOM

Granada, which became the last refuge of Islamic civilization in the Iberian Peninsula, was a pole of attraction for numerous European travellers, mainly Italians. The year was 1526, and Charles V, after marrying in Seville, decided to set up his Court in Granadan lands. The Alhambra gardens and palatial rooms then hosted important diplomats and humanists. Among them there was Andrea Navaggiero (1483-1529), a Venetian patrician, historian and kindred poet of the Greek-Latin classics. From his talks with Juan Boscán came crucial consequences for Spanish poetry: the adoption of the hendecasyllabic verse and a series of Italic poetic forms, cadenced and rhythmical, linked to a new philosophy: the Neoplatonic Petrarchan mode. Navaggiero’s stay in Spain is recounted by himself in a magnificent travel book (1524) and through five letters addressed to the geographer Giambattista Ramusio.

Crystalline streams, leafy olive groves and the fertile orchards, which had enraptured the chronicler Pietro Martire d’Anghiera, must have also impressed the Venetian, for in his account, maybe recalling the orchards that they cultivated in his Venetian homeland, emerges his amazement of the enigma of water in Al-Andalus.

As a Venetian ambassador, Andrea Navaggiero had arrived at the Court to arrange a peace treaty between the Spanish Crown and the Serenissima, the latter a republic that was to ruin the silk industry of Granada. Juan Vernet, in his work Lo que Europa debe al Islam de España (“What Europe owes to the Islam of Spain”), tells how the precious fabric was a monopoly in Al-Andalus, at least until the 12th century, when King Roger made of Sicily a major centre of silk manufacture that later was to expand throughout Italy. While Venice had access to these manufactures as early as the times of the Fourth Crusade, in Al-Andalus silk kept on being the morisco’s most gainful activity since at least the 10th century. The exquisite cloths from Al-Andalus, of Iranian provenance, aroused admiration and greed: the rich embroideries, the tiraz, the deaby (satin interwoven with thread of gold and silver), and the extraordinary kimhaof silk damasked, the designs whose reverse side hide its aspect depending on the angle of view. The Emperor Justinian had given to Arabs the exclusive right to sell the silk, and they, in recognition, named the bazaars as “al-kaysar-ia”, the ‘Caesar’s place’. The fabrics from Granada achieved great renown for quality and the fantasies of its designs. A number of morisco families were sent from the New World to Mexico, for instance, to teach the silk arts. 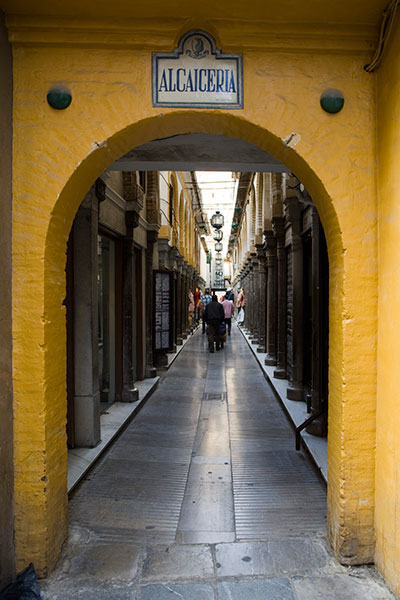 One of the access gates to the historic Alcaicería of Granada, where the trade of the appreciated Granadan silk took place.

The heightened commercial activity that Al-Andalus experienced in medieval times is not apart from its strategic position as an intersection between the Christian and Muslim orbits. From the 12th century, the peninsular Christians’ territorial advance helped the Nasrid Kingdom be the main centre of this activity, which was further benefited by the new reorientation the European itineraries suffered, by sea through the Strait of Gibraltar, or the sea route to the East replacing the traditional land one. Granada’s ports frequently hosted Genoese, Catalonian, Majorcan, Portuguese and Venetian vessels. In times of Muhammad II treaties were signed between Granada and Genoa, Venice’s great rival; merchants trafficked the diverse products that Muslims offered: gold and slaves from Sub-Saharan Africa, pedigreed horses, cereals from Ifriqiya and the Atlantic Maghreb, wax and honey, leather, nuts, Malaga’s dried currants, Guinea’s pepper, orchilla, grana and indigo (to obtain dyes), Arabic gum, figs, almonds, sugar, and the silk of Granada. Until the fall of Constantinople in the hands of the Ottoman Empire in 1493, it had been the major commercial port that provided first necessities goods for the European trade; from that moment on, the known world became smaller, it was the dawn of a New World.