Venice, the temptation of the Orient

​Its origins are lost in the fertile silt of legends going back to the 5th century, when the first Venetians were establishing themselves on the string of islands of the lagoon as they escaped Attila’s savage hordes. Built on flooded sandbanks, millions of pines, olive trees and oaks brought from the Alps served to hold it: the palaces and marble churches, the loves and contradictions of men, stories and History all lie upon a forest turned upside down. And this on an island where Mother Nature is banned ─excepting the Giardini, a Napoleonic whim that was never part of the horizon of bell towers and haughty masts. Building a dream over canals: a poet’s task, without doubt, for together with the traditional building materials, they added the phases of the moon, the ebbs and flows of the sea, the mists, lines that are never quite straight in an impossible balance. It is extraordinary that this seemingly fragile structure was to come to dominate a large portion of the Mediterranean and old Europe. Fierce and subtle merchants, the Venetians swiftly transformed their reign into a powerful state. In the 13th century, The Most Serene Republic, “Lord and Master of a quarter and a half of a quarter of the Roman Empire”, had spread its tentacles as far as the land of the Great Khan. Its markets sold fabrics so exquisite, perfumes so enchanting, stones so precious that they could not have come from anywhere but from that land of rhinestone castles glimpsed by the fabulous traveller Mandeville.

If the waters constituted its origin and its destiny, the Orient forged its fortune. Rivers, deep-seated in time, are the great metaphors of its story. Like them, the Grand Canal, the pathway of our vaporetto, revives sounds, remnants of the past: the betrothal of the great Doge with the Adriatic, in a ceremony that culminates with a golden wedding ring with the Lagoon as a background; commerce, crusades, colonial possessions, made of the city the hub of a maritime empire built over the ruins of the Romania (Eastern Roman Empire).

Inside of Saint Mark’s Basilica

Venice, this other Byzantium, a lone wolf feared by some and hated by almost everyone, was the happy meeting point for the Christian orbit and the Muslim one, between East and West. Towards the 11th century, when the capital of Constantinople started its decay as a commercial and cultural centre, the Italian coastal cities took up the baton of the role of major route to the East.

The less scrupulous, or the one with the sharpest intelligence, was supposed to be the new owner of the Mediterranean Sea. When, for the Fourth Crusade, Venice agreed to transport the Christian armies to the Holy Land for the Glory of the Lord and eighty-five thousand silver marks and half of the booty, the Serenissima entered its own hour of glory. Its basilica, that church “of pirates enriched by all the spoils of the Universe”, as Gautier wanted to believe, began to avidly accumulate treasures without number. The public squares of Crete, the Ionian Islands and Cyprus were set up with the winged lion of St. Mark alongside.

The winged lion, symbol of Venice.

In the boats that opened passage from Alexandria all the way to England, travelled, together with spices, fabrics and other Chinese material, the Celtic epics, the legends of king Arthur, Arabic geography, all eager to capsize in an ocean of languages. From the ancient Roman Sea to a Muslim lake, from the sway of Latin merchants ─Venetians, Genoese, Catalonians─ to a servant of the Turks, the Mediterranean was always a space for dialogue. From 1262 to 1330, the period of full blossom of Italian republics, the shared Mare Nostrum returned to what it was at the best times of the Roman Empire: a centre of economic and cultural exchange, the core of civilization, now in a world more complicated and populated. 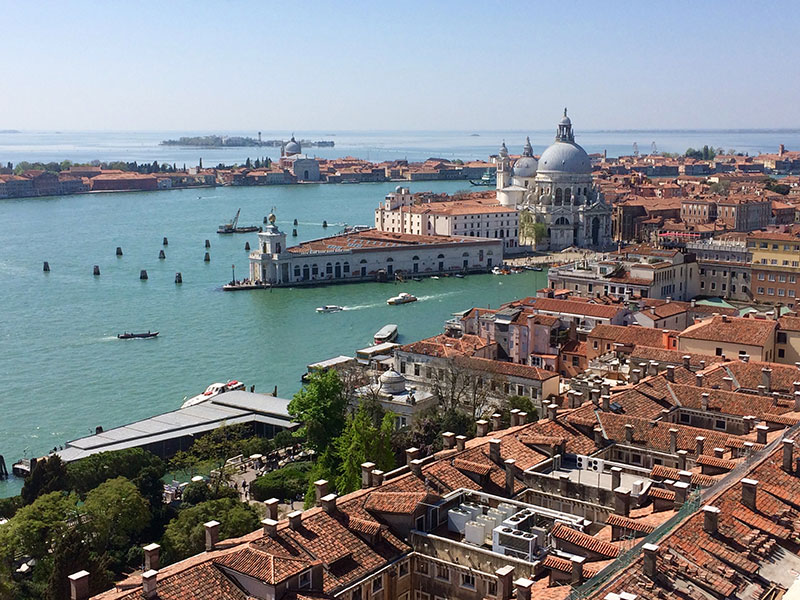 View from the “Punta della Dogana”

In 1486, when the Portuguese rounded the Cape of Good Hope, the Serenissima was mortally wounded. From that moment on, the precious merchandise from Asia started to reach Europe by sea, dismantling the silk roads that were almost an exclusive monopoly of the Venetians. Despite the victory of Lepanto in 1571, Venice never recovered its position. It ceased to look toward the East and started to remember it was European… All this is narrated by its façades. Asia, Middle and Far East are the privileged components of the flamboyant gothic style, with its marble embroideries specific to Venice. After that, it was back to Rome, Austria or the spirits of Versailles; Baroque and Classicism will arrive to endure the three centuries that lasted after the collapse of its independence.

In the 18th century, the Republic of Venice was going extinct but, like a reaction, life in the city turn to all hustle and bustle and pleasure, thanks to its famous carnival and casinos ─ridotti─ clandestinely set up in discreet places. By night, great fortunes are won and lost; its courtesans become celebrities more known than their palaces. There was not a city more free or dissolute at the time, although perhaps its exuberance was to conceal the deep desperation of those who anticipated that their end was not far off. 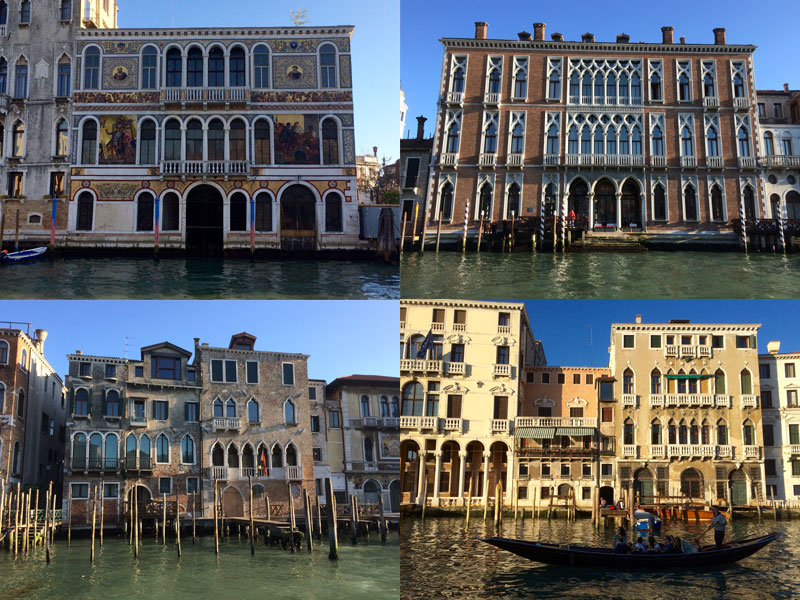 Façades along the channels

It is common, when speaking of Venice of antiquity, to underline the commercial skills of its inhabitants, their capacity to traffic with fabrics, spices, slaves, relics of saints, in the end, with everything that could possibly be capitalised with the greatest cynicism. Yet, to recall that it was the very inventor of capitalism and letters of exchange, to pretend there were none but “merchants of Venice” in its history is not to do it justice. The Murano glass trifles, today stored in the window shops as souvenirs, trace back to a tradition that has flourished in the islands of the Lagoon since the 10th century.

From Venetian workshops also came some of the most beautiful books ever published. Names as Jonson, Ratdolt and Manuzio have gone down to the history of typography. From their studios came the first editions of the Songbook by Petrarch, the Decameron, or The Divine Comedy; the medical work of Averroes was first printed in Venice in 1490. At the end of that century, Venice was a true cultural crossroads, where lived many Greek scholars. It is not surprising that Venice became a major hub for the diffusion of the art of printing, given that the Queen of the Adriatic was, with more than 100,000 inhabitants, the one of the biggest cities in Europe, and a crucial centre between north and south, a link among the Greek, Latin, Christian and Muslim worlds.

A rare and miraculous city, it has never stopped attracting travellers from every horizon over ten centuries. Since those centuries, travellers were later substituted by visitors who, coming from Asia and the whole Europe, rushed on the Saint Mark’s square to gaze upon the same constructions that tourists admire nowadays. Venetians used the substantial benefits of their maritime monopoly to build its enormous palazzi, churches and public buildings first in Byzantine style, and later in Gothic and Palladian, in short: Venice turned itself into a living museum of European architecture. 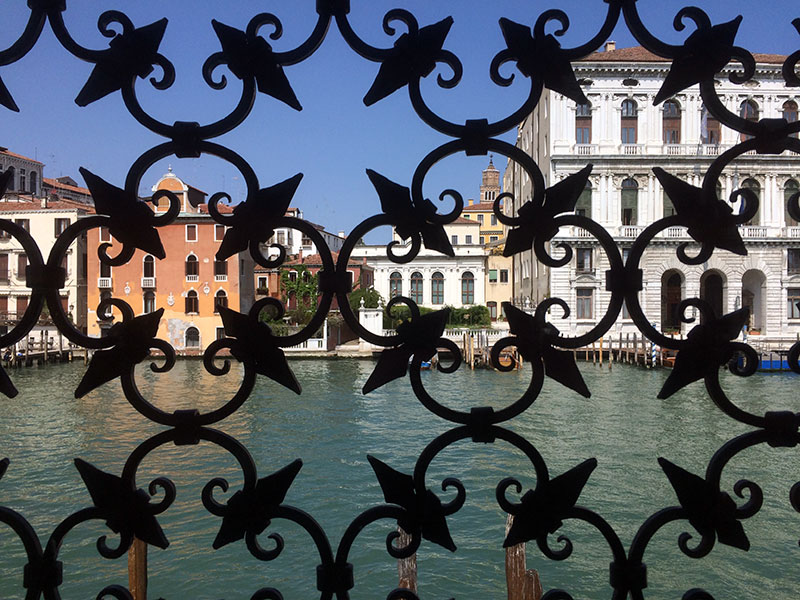 The Grand Canal seen from the Guggenheim Museum