The silk from Granada

The development of the silk industry in Nasrid Granada represented a significant economic boom, and hence social growth; merchants from different parts of the world came to the city to purchase the precious Granadan silk, and in addition to commercial exchange they also fostered fruitful cultural transfer.

When visiting Granada, one of the most interesting walks is through the Alcaicería (Arab souk), which being located in the environs of the cathedral and the Capilla Real (Royal Chapel), gives us an idea of how its historic richness is fed by distinct cultural legacies. Not far from here stands the Corral del Carbón (Charcoal Yard), the only alhóndiga (Arab warehouse) from the times of Al-Andalus that has survived in all of Spain, in spite of its turbulent history. This was the place that housed the merchants who came to Granada, which became an important center of commerce, thanks also to the proximity of the ports of Almería and Málaga.

The word alcaicería has been referred to until now as the “Arab souk”, where visitors flock together, aiming at finding the atmosphere of other times, enhanced by the colorful bustle of streets and merchandise exhibited to the eyes of passersby.

Our story brings us here, to where the big business of the renowned silk from Granada took place. Its quality was known beyond its borders, and there was nowhere in the whole of the Mediterranean, from East to West, where it was not considered the most precious material in luxury settings.

The sericulture was deeply rooted in Al-Andalus, and it was possible thanks to the skills of its people in the field of agriculture. Besides mulberry tree-growing, dyes (despite some being of animal origin) were obtained both from wild as much as cultivated plants. Among the most used, it was theIsatis tinctoria, also known as “asp of Jerusalem”, which grows in the whole Mediterranean area, from which blue was obtained. Red was obtained from rose madder (Rubia tinctorum), which travelled to the agricultural lands of Andalusia from the East. To get yellow, weld was used, either in its wild or cultivated version.

Silkworm cultivation was introduced in Al-Andalus in the eighth century; it was brought here when some immigrants  ̶ the Qaysis, from Syria  ̶  established themselves on the fertile plains of Al-Andalus, which they took advantage of for agricultural production. In Al-Andalus farms (alquerías) of these fertile lands, a broad variety of crops were grown, among the most profitable being the mulberry tree, given the expertise in the art of sericulture that these newcomers from Middle East brought with them. They, in turn, had acquired the knowledge needed to obtain the silk from the worm from Far East, mainly from the Chinese.

For fabric production, Muslims from Al-Andalus introduced horizontal looms and developed a sophisticated infrastructure  ̶̶ which covered all stages of the process ̶  allowing them the productive framework they needed to foster the development of a textile industry, which was a pioneer in Europe.

Upon the arrival of the Umayyads to the Iberian Peninsula (9th and 10th centuries), Persian and Syrian courts were taken as the aesthetic references of good taste. The Umayyads of Cordoba introduced in Al-Andalus the tiraz industry, workshops where sumptuous textiles were made. It was something of an institution protected by the power of the government, given the high value of their creations.

Abd-er-Rahman II founded one of these royal workshops in the alcaiceria of Córdoba, located by the mosque. Its productions were very much acclaimed due to its industriousness, the beauty of its designs and the excellence of the materials used, all in the hands of highly qualified craftsmen.

These creations met the demands of a material for the manufacture of luxury clothes and accessories which bedecked the highest positions of Al-Andalus, like caliphs and emirs, mainly for ceremonial occasions and purposes. Other uses of these regal fabrics were for being given as gifts to the delegations of representatives that visited the monarchs of Al-Andalus, as well as trophies in different competitions, or tokens during commemorations.

One of the finest copies produced between the 10th and 11th centuries in the royal tiraz of Córdoba was the one that belonged to the Umayyad caliph Hisham II, which is now in the Royal Academy of History of Madrid. It was used as a turban that, after covering the head, dropped two strips along the arms. It was made of a very fine silk tissue and linen, richly embroidered in golden and silver threads, and it was decorated with three strips that occupy the whole length of the piece. In the decoration -where usually appeared beautifully adorned embroidered epigraphs with praises and allusions to the caliph- octagonal medallions frame animal and human figures in the central part, while on the sides there is an inscription holding the message:

In the name of Almighty God, the Merciful, the Compassionate. May Divine blessings, prosperity and long life be the imam’s attributes, the Servant of God, Hisham, he who is the purpose of His benevolence, the Commander of the Faithful. [1]

Despite being in Umayyad times when the most important centres of production were established in Córdoba and Almería, later on, in Nasrid times, the silk from Granada had improved significantly so as to be unrivalled, according to the classic Arab chronicles, like Ibn al-Khatib (16th century) and the German traveller Hieronymus Münzer, who also visited Granada in the 16th century.

Among the most important markets where the silk from Granada was sold was the Italian one. The Italian merchants, mainly Genoese who purchased it regarded it to be of highest quality. So much so, that they named one of the markets (alhóndigas) in Nasrid Granada, the “Alhóndiga of the Genoese”. In the rest of alcaicerías of the kingdom of Granada (like Almería and Málaga) they also bought in order to sell later in the European ports of the Mediterranean, Flanders and England.

The quality of the silk from Granada was due, first of all, to the food that nourished the worms, the mulberry trees that were cultivated in the mountain area of La Alpujarra, which had a superior quality thanks to the favourable climate and its geographic position. This region, located in southern Granada, was in Nasrid times a vast forest that produced two types of mulberry: the white and the black. The white one was used to obtain a high-quality silk, while the black one gave an inferior quality. In this way, it was decided to suppress the production of black mulberry to only produce the one of finest quality, hence, keeping out the competition that might arise in other areas of Al-Andalus (mainly in the East). In Granada there was also a law that prohibited the use of the resulting tangles wasted from yarning to elaborate noble fabrics. [2] The quality of the silk from Granada was fairly renowned.

The prosperity that the silk production and its manufacture brought to Granada was possible as a new artisanal society, both rural and urban, arose, organized mainly in guilds according to the different tasks of the related activities. Later on, at the beginning of the 16th century, the Casa de la Seda (House of Silk) was created to certify its quality, given that by the end of that century, the demand was such that it constituted one of the main economic sources for the Kingdom of Granada, from which a greater part of the population made their livings. The city hosted a silk neighbourhood where workers of the whole production system lived. There are still many streets in Granada that bear the names of the distinct activities related to the silk manufacture: Tintoreros (Dyers); Azacayas (Water pipe lines); Blanqueo (Whitening); Damasqueros (Damask producers); Calderería (Boilers); Hileras (Spinners); Plegadero Alto (Folding); Tinte (Dye); Toqueros (Headdressers), and Cuesta de Maraña (Tangle Hill). 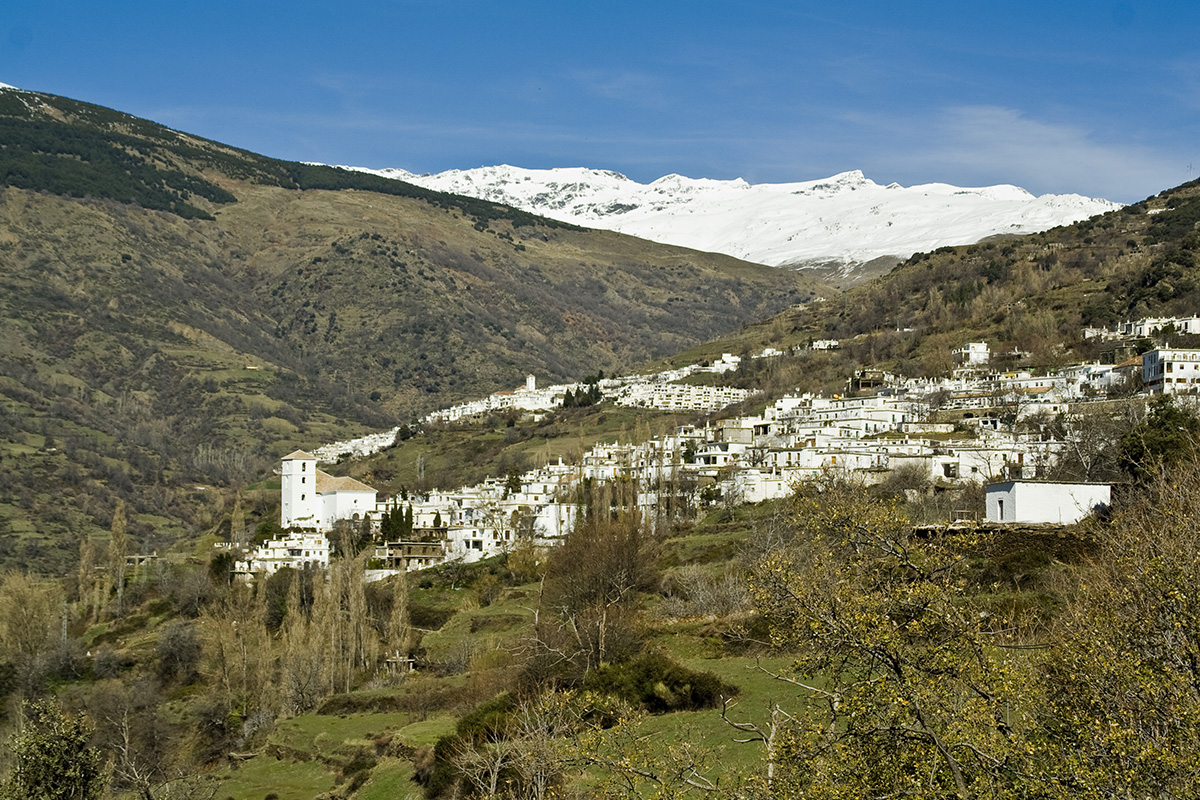 Silk was used to make different types of fabrics like velvet, taffeta, damask, brocade, and above all satin, which had such a quality that it even exceeded the ones produced in the East. Yet, it was also used in the ellaboration of fabrics to make garments for current usage, such as headscarfs, sashes and caps. This industry evolved in such a way that its trade produced not only a source of economic resources, but also, thanks to its trade, a network of fruitful political and cultural relations between the Arab world and Europe.

Sumptuous textile processing, the epitome of luxury for medieval courts, bred high specialization in the field. Craftsmen made unique fabrics of extraordinary beauty, intricate design pieces  ̶ in which a wide range of colours and nuances was used ̶   and exquisite embroideries interspersed with silver and gold threads that were the favourites in this new luxury-goods industry.

Once the era of Al-Andalus was over, these beautiful fabrics were mainly used to deck reliquaries, or for ecclesiastical uses, as the case above mentioned, which was discovered in 1853 in the church of Santa María de Rivero in San Esteban de Gormaz (Soria).

From the 17th century on, the silk industry declined in Granada for various reasons, one of them being the expulsion of the Moriscos. Nevertheless, it was until very late in the 18th century that there was still enough production to export these fabrics to the Americas.