Priego in its labyrinth

Priego de Córdoba counts its history over the course of centuries among Caliphal, Nasrid and Baroque traits, and it still remains there. Gracefully showing its castle to the traveller, its Carnicerías Reales (Royal Butcheries), its churches and the adarve (or parapet walk) whose purpose in our days is no more than crowning the canyon that falls deep before the vast expanse of its beautiful countryside, in the heart of Subbética Natural Park.

When the traveller enters the Subbética National Park, the status of Priego de Córdoba is immediately understandable. Crossroads and settlement of different cultures, it owes to Nature the gift of its personality. The pinhead that marks the centre, or the wind rose of all the mountains is there, in the point that crowns Priego de Córdoba de Córdoba. 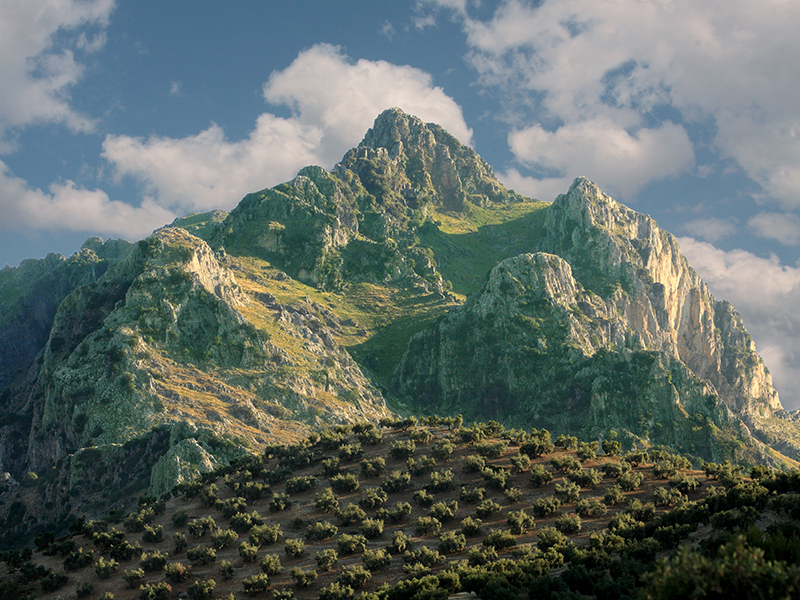 From the top of the hill of the Calvario, we see how the urban centre unfolds over an esplanade where one finds the Fuente del Rey (King’s Fountain), the Versailles-style Fuente de la Salud (Health’s Fountain), and a bit before, on a landing, the Sevillian cross of the Cerrajería (Locksmiths). Identically, as if it had been transferred from the plaza of the neighbourhood of Santa Cruz, safeguarding here the remains of Bartolomé Esteban Murillo, as surely as in those times as Óscar Tusquets explained that plagiarism was not looked upon badly. 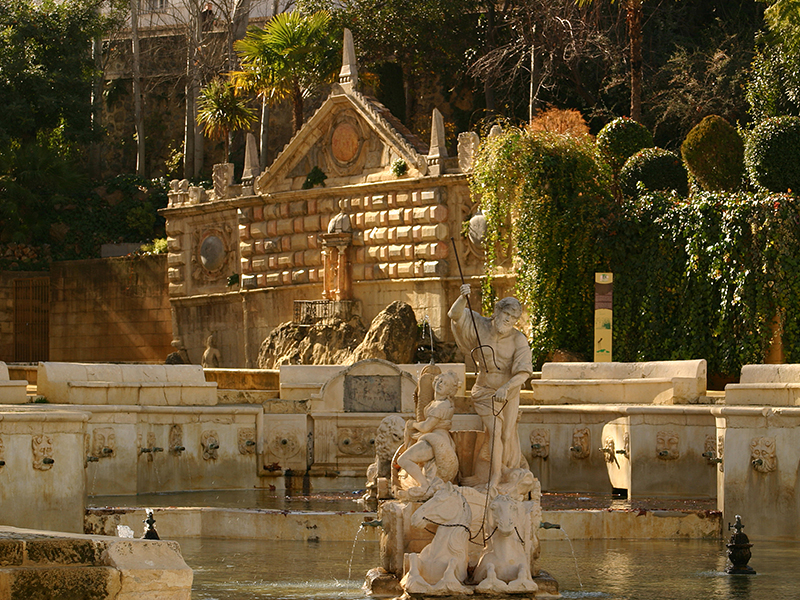 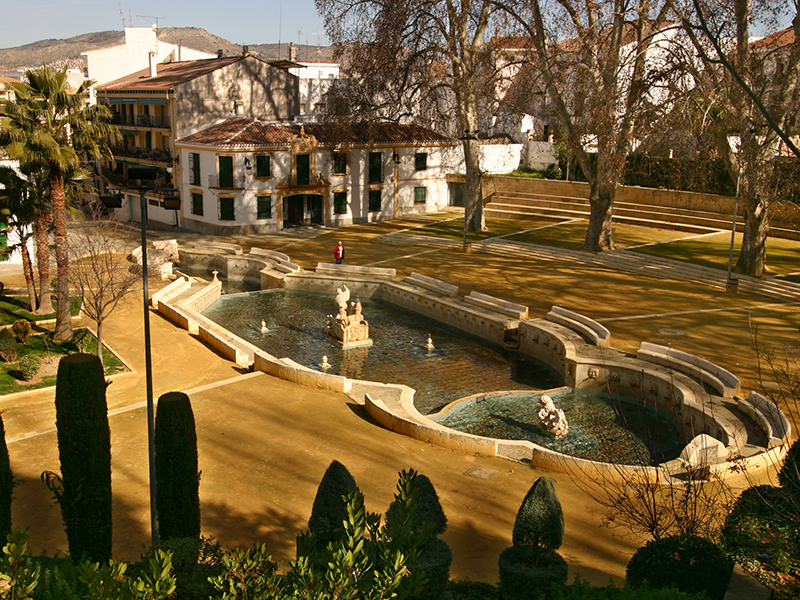 Iron is everywhere in Priego de Córdoba de Córdoba, although it always has had its deposits in Zamoranos, the forge is one of its loves, and that is why a wide and superb range of streets lamps is exhibited in the balconies of the houses as well as along its promenade. These are half Cordoban and half Granadine, although authentically from Priego de Córdoba, and that is why its window grilles take a thousand different shapes, sometimes covered with trellisses similar to the Tunisian mousharabhias, which are even painted in the same colours.

Together alongside iron, wood appears everywhere taking many unique shapes in the main doors of the houses, in the handrails of stairs, here and there. As in one of those disputes of the Mester de Clerecia’s (Ministry of Clergy, a Castillian literature genre) Denuestos del agua y el vino (Reproaches to wine and water), if we had to decide a definition of the city between the Baroque splendours and the small works in wood and iron that crowd the historic quarter, it might be those last ones that would claim victory. It is possible that they contain the labyrinth of a clustered History, and in the same way that in the bunch of grapes of the vines, so abundant in the city, everything ̶ excepting the Fuente del Rey ̶ is shown as a minor sign so as not to boast of the prosperity built up in the nineteenth century. 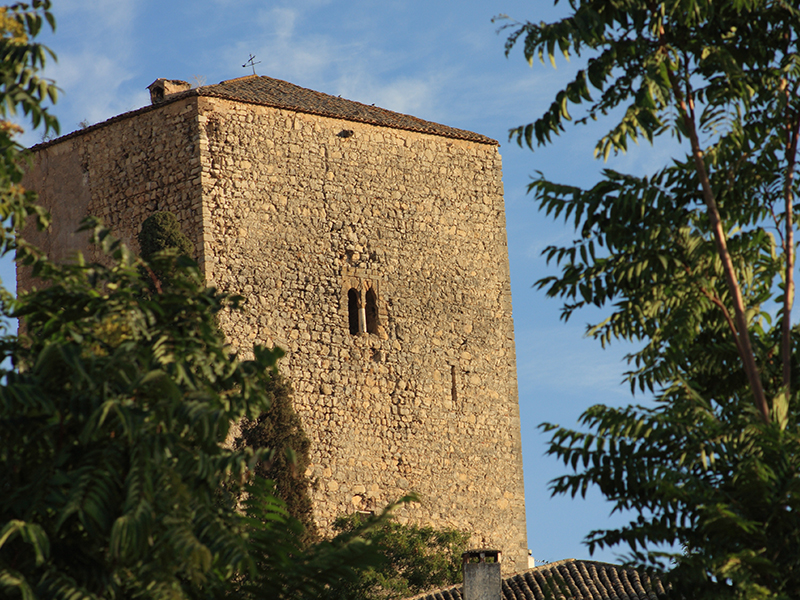 The castle was owned by the marquises whose title bears the name of the place. The first of them, Don Pedro Fernández de Córdoba, was a Renaissance humanist who owned a library that could be compared to that of Hernando Colón. Yet those inclinations should not survive in later centuries although the marquessate territories extended through the Subbética mountains and valleys: the person in charge of providing information to Pascual Madoz for his Dictionary explains that the slender Torre del Homenaje (Homage Tower) was used as a silo by the lord of the place in the mid 19th century.

Judging from the size of the building’s rooms, he could have stored much. On its ground floor some artist has left an installation consisting of dusty suitcases and heaps of panniers, not lacking in a certain grace and to be glimpsed as if it was Cristobal Toral’s painting workshop. That is all that remains in the center of an enclosure to which the verses of Juan de Arguijo could be addressed:

Alas the grief of those you see now
Fields of loneliness, withered hillock…

At the foot of the castle and going around the church and past the parapets extends the neighbourhood. The castle neighbourhood, of course, in the same sense that the Hradčany of Prague, with its main street (here calle Real) and even the playful corners that without knowing take part in the Testamento Andaluz (Andalousian Testament), by Manuel Rivera. Cubist games are reproduced here without repetition when, all of a sudden, by reaching the small square, the roof lines that ascend up to the church steeple, enclose the foamy waves of the Baroque tabernacle.

On the other side of the fortress, in what should have been the ring between the city and its common lands, the Carnicerías Reales (Royal Abbatoirs) stand with its imposing Carolingian gate ̶ of a Toledo or Caceres’ style ̶ and an spiral staircase which was probably made with no artistic intention, but only to allow the easy loading of meat, resulted in an impressive aesthetics. The style of the outer face of the establishment does not correspond to the date that, according to the books of the history of art, it was built, and neither does the title of “real” (royal) match the building, for it was assigned by its own hall. Real History in any case, comes first than literary History. And it is more convoluted.

Opposite the Carnicerías (Abbatoirs) façade, fruit of a late Mannerism, we find the street that opens to the square where the Church of San Pedro stands, whose original owners, the Franciscans, every guidebook names as “alcantarinos”.

The temple shows in its frontal aspect the tiara and the keys, symbol of Saint Peter’s Roman Magisterium, but a doubt rises at once: Would the title not be related to Saint Peter of Alcántara, the founder of the Franciscan “alcantarina” branch? The art of dislocation has been efficiently used in our territorial puzzle, as Americo Castro summed up in this paradigmatic gem:

“We do not inhabit our own history”.

This kind of dislocation was very often used in the centuries when Descartes was not known yet, rather prevailing the medieval symbolism. His philosophy was born from the “primum vivere, deinde philosophare”(first one must live, and then philosophize). It would be still necessary to philosophize to be able to live, and in the same way that businesses today move offshore so as to find more profitable markets, at those times that also happened with the beggars’ companies, mechanisms of as much economic entity as the twine industry who blind men and woman made in a continuous search of audience as if ropes were a television channel.

But maybe those friars were looking deliberately for misinterpretation. There is nothing new under the sun!.

In any case, that was also the process undertaken by the lush Baroque hermitage of the Aurora previously dedicated to San Nicasio, the saint whose name day it was when Priego de Córdoba was conquered by Christians. 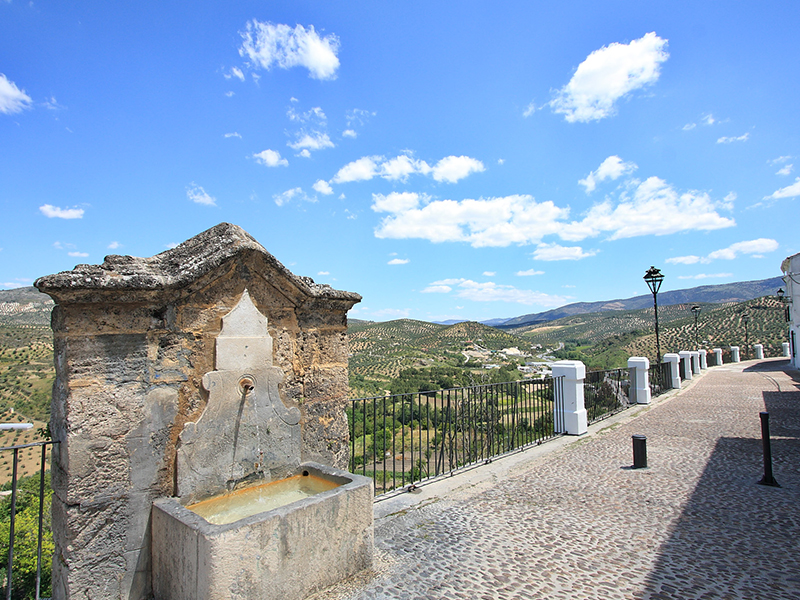 The Balcón del Adarve offers a panoramic view of the countryside that embraces almost all four points of the compass.

In the 18th century, when the deeds of conquest were already far away, friars got down to work and started to disseminate the vital mysticism that can still be found in our days in the concepts of the couplets sung by the campanilleros choirs (groups of people who serenaded by night or at dawn singing religious songs and ringing bells). They were also called “Auroreros”, and they still get on strolling the streets at dawn on special days, playing the role of Marian muezzins with their sweet and ingenuous sounds in spite of their learned and stilted lexicon. Some French artist might have branded them as naïve, might he had heard and understood them.

The figures of San Juan de Dios or the Virgen de las Angustias which overlook their main façades achieve a human ingenuity; they are remarkable images, of ovewhelming personality, and far from the repetitions that religious imagery exercised in other places. Do they belong to local schools? And so what? The naivete of the virgin in Fuente de la Salud, listening to the gurgling of the water, now scarce, made of her more the Lady of the place; almost mythical, almost eternal, almost a Great Mother travelling in time up, back to the Neolithic.

Amidst the spouts of the Fuente del Rey I was itching to get back to the climb up the small mountain. When I entered Priego de Córdoba, last year in December, we went the wrong way and we finished up there on the top of the hill without knowing how to start going down. Then, out of the blue, the landscape of crosses of the Calvario was in front of me, amid the fog shaken by the wind of the Albayate mountain range, which ressembled a Gustave Dore’s sketch. Although the esplanade now shined in the yellow pale colour of fall, it still kept the same telluric charge, the magnetisation owned by places of this kind, scarred since times before that only God knows, nestled in the high points of many villages and towns in Andalusia.

Maybe everything is easier than it seems: perhaps everything is due to the fact of the hill being a huge ox of water that distills its base in the Fuente de la Salud.Fons Salutis was named the baptismal font in liturgy. Perhaps, for Science everything is simple and rational, but in cities like these, such simplifications cannot be made; it cannot slash the sentimental well-spring of mystery. It needs its ambivalence to go through the centuries. This is the way the labyrinth of Priego de Córdoba goes, sleeping pleasantly on the rib of its cordillera.