The development of domestic agriculture

The cultural legacy of al-Andalus is, without doubt, a constant element in the villages, towns and cities included in the Routes of El legado andalusí. In the Route of the Caliphate, in particular, fortresses, walled enclosures or hydraulic devices make up an important part of the patrimony that is witness to the Muslim heritage between Córdoba and Granada.

It is the presence of orchards and gardens that mark out the streams and crown the summits of the ancient medinas, which can transport the traveller to a time that can recreate the Romantic image that was described by Washington Irving: “[…] beautiful hanging gardens, groves of oranges, lemons and pomegranates, soaring cedars and haughty palms mixing with the firm and crenelated walls and towers, which make it possible to guess the opulence and luxury that reigned within.”

Very similar should have been the picture perceived by the Castilian monarchs when the standard of the cross began to top the highest bastions of Andalusian villages. In the urban landscape, rammed-earth adobe comingled with the exuberance of garden areas whose greatest expressions started in the Arruzafa and ended in the Alhambra. The innovations in agriculture, together with advances in botanics that were experimented with at this time would end up in an artistic transformation of nature itself.

In this sense, the difference between orchard and garden over the Islamic period was hardly noticeable. It would already be from the late Middle Ages, and systematically as the Christian advance consolidated further, that both definitions finally referred in practice to distinct concepts. The lead role that gardened areas had in the palaces of al-Andalus was going to be diminished for the benefit of the fruit and vegetable cultivation, whose main purpose was self-sufficiency rather than pure aesthetics. The harnessing of hydrological resources gave shape to the built-up areas of al-Andalus, leading to the emergence of the characteristic fertile plains, where the continuous succession of farms showed an agricultural space characterised by their variety and richness. 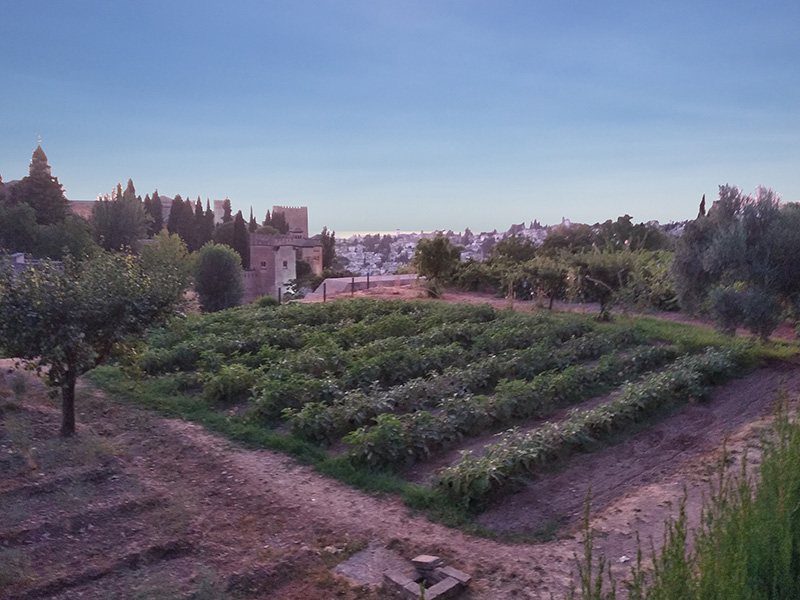 View from the Generalife orchards, with the Alhambra in the background.

The Mediterranean climate marked out to a large extent the kinds of cultivations in rural areas fostering an intense commercial activity that brought contact between the productive areas and the large towns and the city or civitas. The agricultural space was organized into sectors and apparently was differentiated depending on the degree of human use. In this way, we can find the orchard (hortus), or mount (silva) and between them the cultivated land (ager) and next to this the wilderness (saltus).

Aerial view of the village of Moclín (Granada), in the Route of the Caliphate.

There is no doubt that one of the great contributions of Islamic culture to the agriculture was the spatial organization of land. However, while the Arabs were the key agents in the process of the evolution of crops, we should go back to Roman times in order to know the origin of the agricultural system that was implemented over centuries in the Iberian Peninsula.

As pointed out before, Roman agriculture was already totally adapted to the Mediterranean ecosystem, and consequently crops that grew in the areas we are referring to were results of the domestication of native species and others that had acclimated to the land long ago. The need to take advantage of the wet seasons marked both the types as well as the timings of plantings. That was to be the reason of the appearance in the Baetica (Roman Andalusia) the characteristic Mediterranean trilogy (cereal, olive tree and vine) which had large production centres since ancient times in the towns and villages which are today included in the Route of the Caliphate. Roman silos from Espejo, the villae of Cabra, Alcaudete or the villages located in the very fertile plain of Granada, just to mention a few, together with the coins found in places like Castro del Río, Baena and Alcalá la Real, reveal the existence of dry-land farming typical of the Mediterranean scrub areas which had been perfectly adapted to the climate. 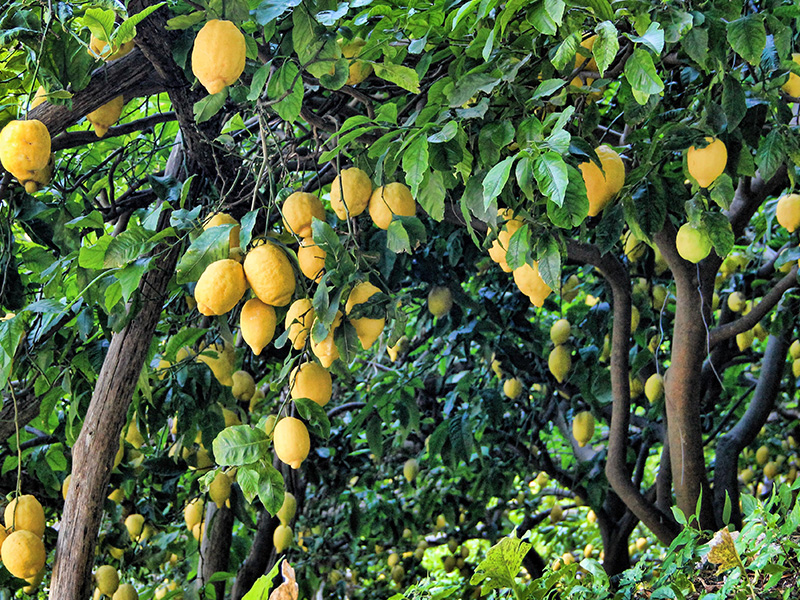 Citrics were another important contribution from the Arabs as reflected in the Agriculture Treatise from Al-Andalus times.

Artificial irrigation of the fields was very seldom carried out, and it was often limited to orchards, whose location, since Roman times, had been placed near the homes much as indicated in the writings of Columela: “the orchards with fruit trees and vegetables that are enclosed by a hedge, close to the house, in a place where waste from the corral and baths can be dumped, that with other occasional waste, like the one resulting from grinding olives, can also fertilize the vegetables and trees”. This agricultural system did not entail, therefore, a remarkable change in the environment, since it directly depended on rainfall, and crop areas were not conditioned by the availability of permanent water resources.

Gardens, for their part, were also closely related to those great villae, although they existed not only in recreational estates in agricultural areas. In the urban environment, important testimonies have been also proven, such as the ones that recently appeared in an archaeological dig carried out in Córdoba. In this case, it is not only about the garden’s exquisite design, but also the importance that water had as an ornamental element providing jets and fountains. Even so, the existence of garden areas in the Route of the Caliphate lacked a true meaning until the setting of al-Andalus. Over this period, it was the production of vegetables that mostly proliferated, and together with the rest of crops coming from the rural areas, enabled the supply of the cities (civitas) and the important trade that was developed all over the empire until the 5th century.

On the outskirts of nearly every city in al-Andalus, the landscape appeared dotted by farms or country estates, of greater or lesser extension, where crops were used for domestic consumption, a tradition that lives on today in many places in our geography. 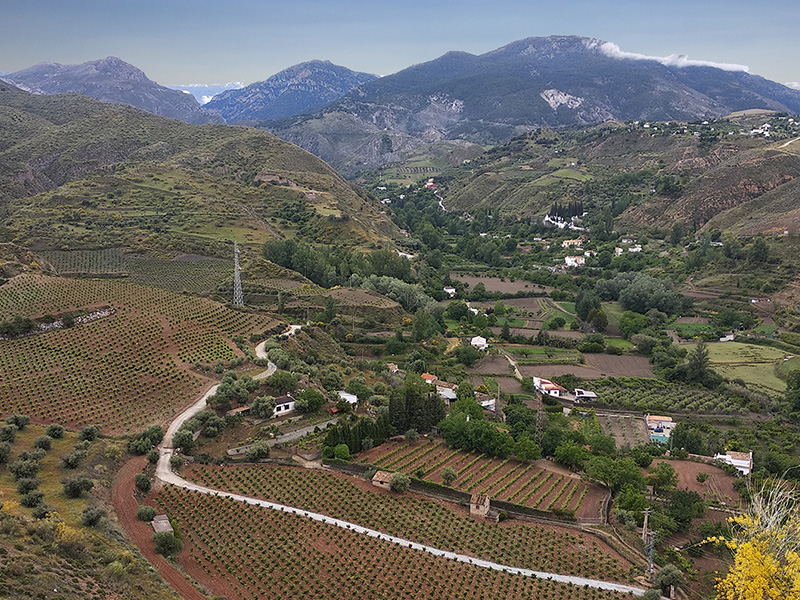 The fall of the Roman empire caused a decrease of the importance of the city as a centre of administrative control and a deeper social ruralisation, (which in addition had, in most of the cases, a subsistence economy, where commerce dramatically lowered its radius of action) and caused a gradual expansion in family farming. The process of involution developed during the High Middle Ages brought about a certain regression in agriculture, as the system of intense exploitation in use lasted until the appearance of a dominant social group that ended up linking the rights of wild lands and free men. This is the moment when an agricultural expansion raised, its main characteristic being the introduction of a system of exploitation even more intensive than the former one, although dry farming continued to be predominant.

The cultural interaction helped in the introduction of new crops to places like al-Andalus, where species that did not belong to the Mediterranean forest were acclimatized. Rice, bitter orange, lemon and lime, sugar cane, banana, aubergines, mango tree, among others, came from faraway lands such as Burma, South-East Asia, or the Malay Archipelago. 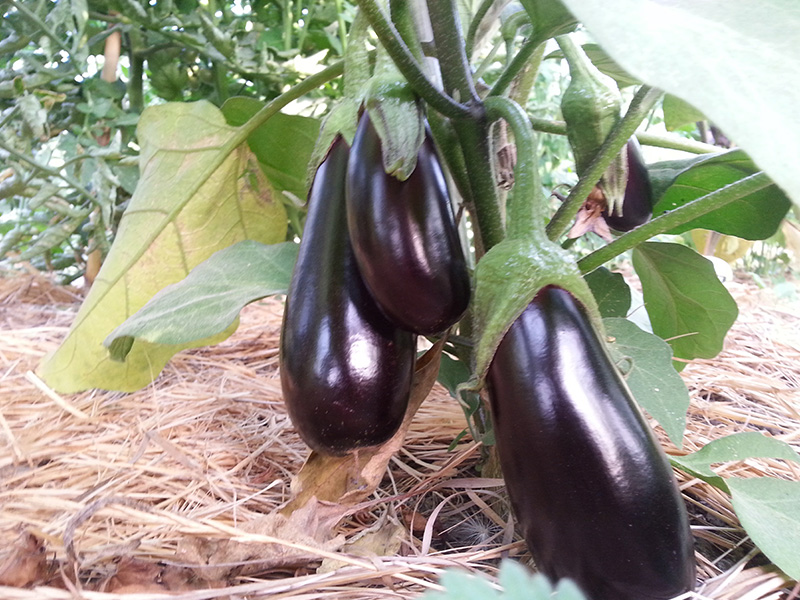 The arrival of Arabs to the Iberian Peninsula meant an innovative contribution to agriculture which had not existed until then. The different conquests that the Arabs had carried out historically, despite their origins as nomadic shepherds, made possible that they ended up assimilating the culture and economy of the peoples with whom they came into contact. Species from different African areas were also domesticated in the end, like millet, foxtail millet, pole beans, which came to India over the second and first millennium B.C., and from there to the Sassanid Empire between the 5th and 7th centuries of our era. The journey of these species entailed that some of the areas conquered by the Arabs already knew certain crops, which later on were tried on the lands of al-Andalus. Dry-land farming, which prevailed until then, were eventually modified and replaced by trees and plants from tropical and sub-tropical climates, characterised by abundant rainfalls, which are non-existent in the Mediterranean area. 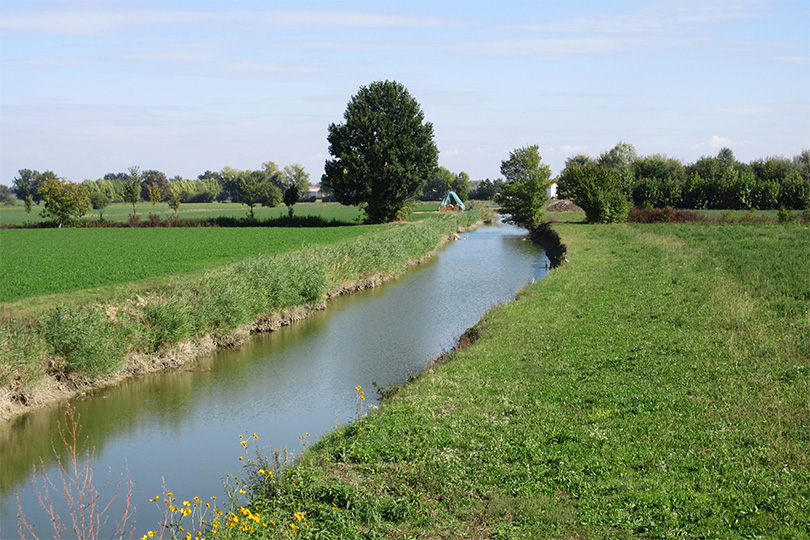 As watering the fields became necessary for the development of specific crops, from that moment on, a profusion of references start to appear, such as the inventories of water resources, or kurals, where the different systems from Córdoba were described, and among them there were its water wheels on the river.
Different works written by Arab geographers give us a more or less exact idea about the transformations that since their arrival agriculture experienced in the Iberian Peninsula. While Ibn al-Faqih affirmed that in the 11th century the Hispanic land was poor in date palms but very abundant in “olive oil, cotton and linen”, the descriptions sometime afterward of the cora(province) of Ilbira already included the production of citrus and sugar cane. The development of irrigation was to allow an intensive farming with bumper crops, whose references continually appear in treatises such those of al-Razi, faithfully reflecting the agrarian landscape we are talking about:

The land is abundant in good waters, rivers, and lush foliage, orange trees, hazels and sweet pomegranates being the most, and which ripen faster than the bitter ones. There are also many canes from which they make sugar..

Other geographers also testified to the different crops that grew along the Route of the Caliphate in the times of al-Andalus. It was the case of Ibn Galib, who refers to the castle of Baena, to point out that “it is located on the top of a hill whose land is of a good quality, and it is planted with trees, vineyards and all sort of fruit trees”.