Medina Sidonia, a crown without a king

There are spots whose mere location foretell its long existence, where its horizon has not changed: same mountains, same plains, or valleys… Yet, man has registered in them their history throughout time.

Only God knows how many centuries or millennia Medina Sidonia has been standing there, alone; we will be knowing it little by little by what we learn through the aging remains that appear amidst the present-day houses. The position of the hill over which they raise, between the countryside and the mountains, would certainly have been always an invitation for the human habitation. 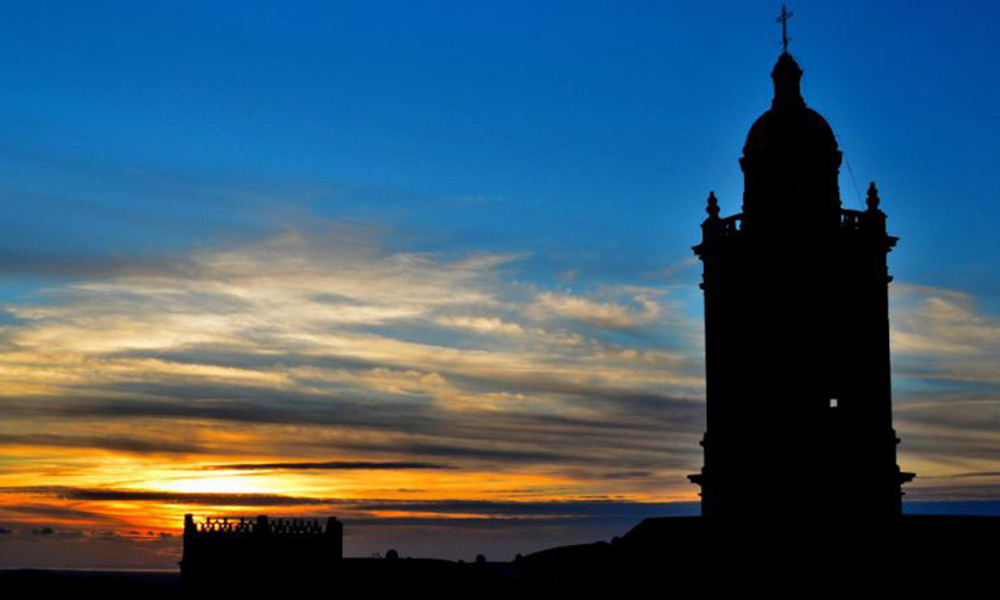 We started up the hill when winter had just come, amid the mist born of its lake as if it was smoke from a dormant volcano. But sun shines above, and, with it, we go down to the street, where the Roman remains of Asido Caesarina lie. They consist of a stretch of road and sewage pipes, and this is what has allowed us to know the direction of the cardo.[1]

[1] A cardo, in Roman times was a north–south oriented street, which together with the decumanus street were the main components of city planning. 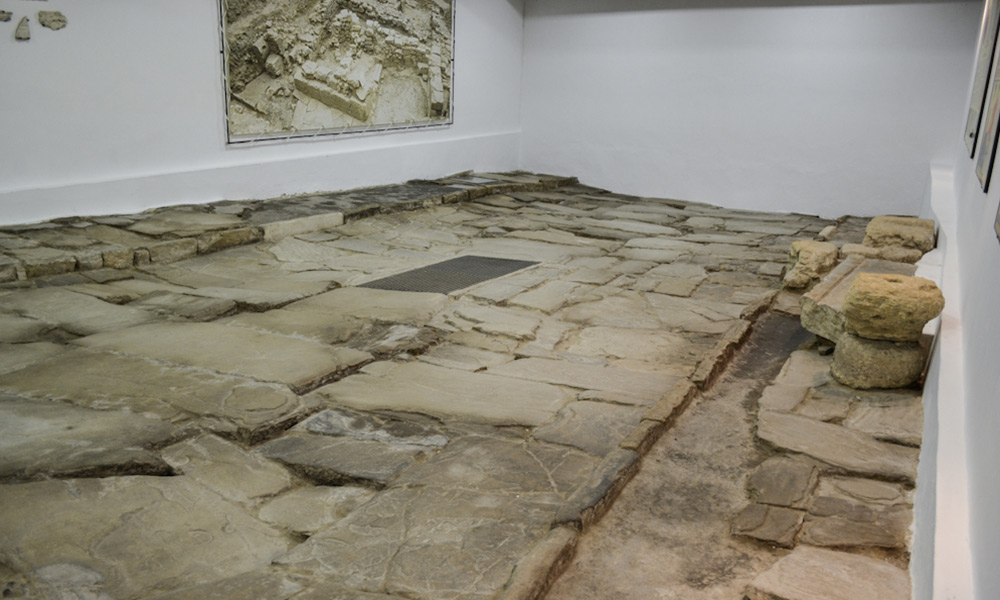 The vision of a beautiful window under a playful set of roofs takes us to the church of Santiago, the first to be built in the city after it fell into Castilian hands. It looks over the edge of the outcrop that overlooks Vejer and Chiclana and was almost certainly part of the Christian ribat[2] of that military order, put there as a protection against the raids that could come from those roads that can be spotted from far away. These, together with those coming from Arcos and Alcalá de los Gazules, form three sides of one of those triangles that have shaped the world during a historical period, like the one that in Greece is formed by the Acropolis of Athens, the promontory of Neptune in Cape Sounion, and the hill of the temple of Aphaea in Aegina Island, bound by the threads of suspicion.

The Guzmanes, with origins from condottieri, ended up being named in Seville succinctly “the Duques”; and even today people call the square that still exists in the centre of the city Plaza del Duque.

This is how the story of our Mediterranean is: everybody got into everybody else’s house ever since gods walked the earth.

[2] Ribat, also rábida in Spanish is a word of Arabic origin through the Andalusí dialectal form ribat (رباط), for a fortification to house military volunteers as well as serving as places of piety. 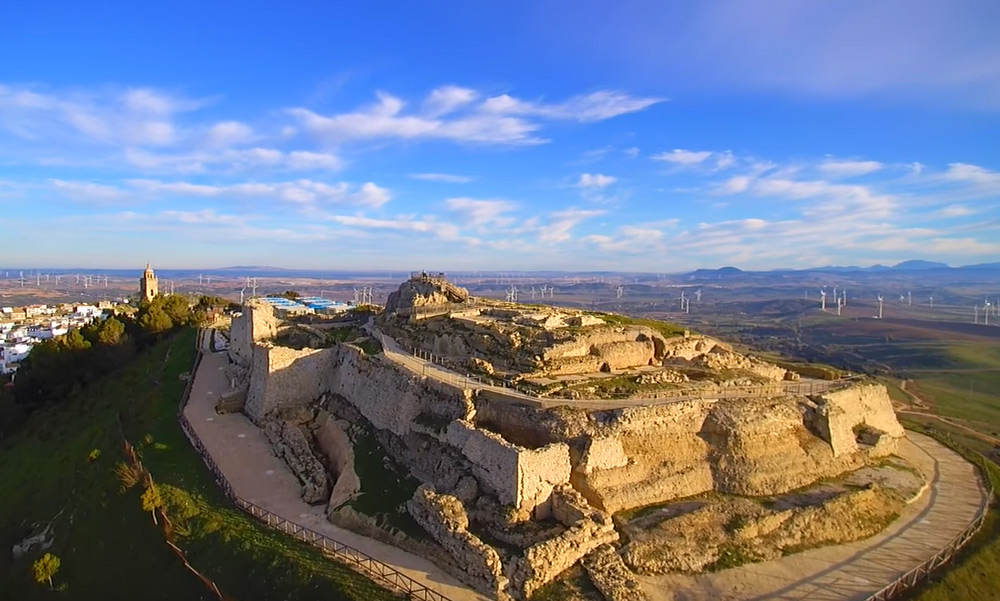 Immersed in these thoughts, we have arrived through narrow streets to the square, presided over by the town hall, and which the fashions of the great centuries turned into an alameda (avenue with poplars), and the nineteenth in a Salón, or public walkway. The wide hall in the municipal building ̶ with a Renaissance layout, despite that it was built later ̶ contains Roman statues; but we do not need to go in to notice which were the important years of Medina Sidonia ̶̶ Asido ̶ in that empire: this elegant square without large trees, which people continue to call alameda ̶ although it only lacks one name: forum ̶, says it clearly; and from there on all the rest came upon.

Without giving much thought to verify it, there are the taverns of regular clients, full of products; and the two confectionery shops that make here the best al-Andalus-style cakes in the 90,000 square kilometres of Andalusia. And in the opposite side the Market, still showing the lines from the second half of 1800’s that witnessed its inauguration, struggles not to be put aside from the route that is taken daily by those who go out to buy bread. It is opposite to the Convent of San Cristobal, in whose cloister the Augustinian nuns still bake alfajores[1], the torta parda[2] and the amarguillos (bitter almonds cakes).

[1]Medina Sidonia’s typical pie made with a pastry with almonds, flour, spices, and eggs, filled with “angel hair” (pumpkin strands in syrup).

[2] Glazed paste made of almonds, walnuts, and honey (and sometimes pine nuts) toasted breadcrumbs and honey. 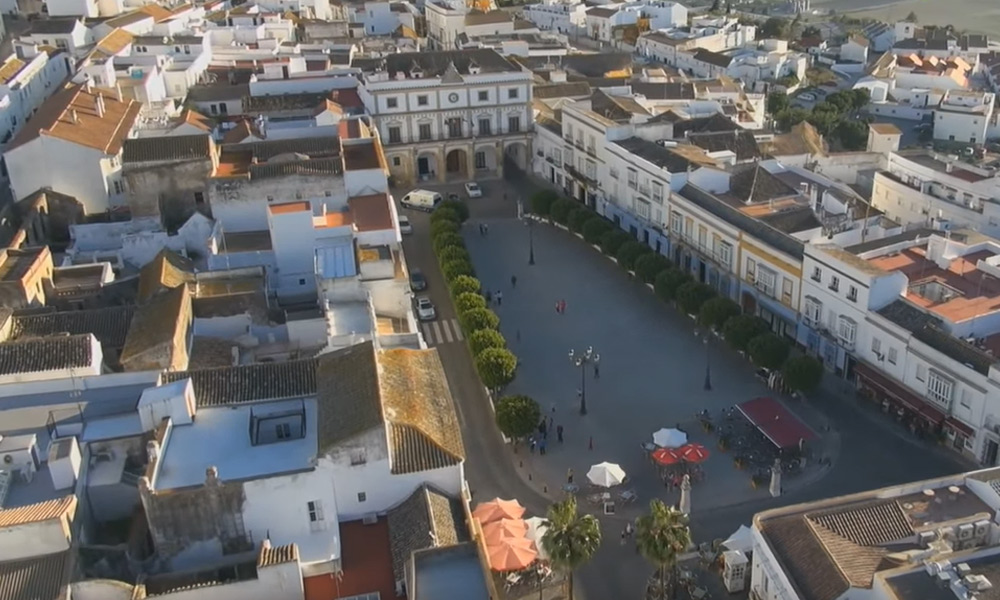 The popular name given to the convent of “the lower city nuns”, supports the same division that Medina shares with Carmona and the existence of diverse defensive structures. After leaving behind the slim tower of the Victoria, we get to the main gate of the old city, the Puerta de la Salada  ̶ referring to a fountain that was in its vicinity ̶  whose name was changed three centuries ago because of the devotion of the friars to the Virgen de la Pastora.

The Arco (arch) of la Pastora or La Salada is, without doubt, the most beautiful caliphal gate that remains in Andalusia, which is to say, in the world. The gradual ramp in front of it makes it looking even loftier, and makes us wonder which is more imposing, its front or its back. It gives access to the true medina; its houses  ̶ like the ones in all the climbing lanes in most of our historic cities ̶ , show that the site was reserved for the poorer inhabitants of communal patios and for the Recollect nuns.

But the neatness of their inhabitants, and obviously the good plans for urban planning and preservation over the last decades, open and close to whitewashed streets and attractive squares that leave us in the esplanade that looks toward Jerez, with the Romantic view of the ruins of the hermitage of the Cristo de la Sangre, framed by almost wild palm trees, and to our back the road leading to the highest part of the city.

From there we will get to the church of Santa María la Mayor Coronada, after having visited the convent of the nuns from “the upper side”, the circular church and its octagonal dome, introduced by the little square that widens the perspective to the building of the church, its cloister, and the lords of the city’s castle. In this lateral Renaissance façade, what stands out above all is the image of that Virgen Coronada (Crowned Virgin), a ducal title that presaged the intentions that the House had, as did the Duke of Braganza in Portugal, who tried to make Andalusia independent from the Crown of Castile by taking advantage of the weakness of Phillipe IV and of the state of social upheaval. It was then that a scroll nailed on the door of the church of the Magdalena in Seville appeared, with these verses:

Crown without a King
Coin with law
Private without brains
Money without weight
Counsel without counsel
And the poor vassals without skin.
What does it matter to Seville
To be more Portugal than Castile?

This was the start of a conspiracy which ended up with some heads rolling along the ground, and this city of Medina Sidonia being transferred to the royal dominions.

The figure of Santa María Coronada is not only in the main altarpiece, but also over the gate that opens from the interior of the church to the cloister, which in the 14th century was perhaps a mosque over which, little by little, and starting by its feet, it was built.

Its rich heritage shows how the Ducal House wanted to make an emporium of it, even trying to transfer to Medina Sidonia the episcopal see, given that by the end of the 15th century the cathedral chapter of Cádiz sought refuge here during the Portuguese naval attacks. Who knows if this is the origin of the accounts that tell of the importance that it had in the times of the Visigoths, whose remains, then, were nowhere to be found. The altarpiece by Roque Balduque and the works by Pedro Roldan shine, however, with a noticeable splendour. In the entrance archway, in the Baptism chapel, the last stonecutter sculpted in the keystone, as a Medieval symbol, the face of the devil.

Those piercing eyes keep on dancing in our heads as we exit and see, on the other side of the castle, in the foreground, the tower of Doña Blanca. Doña Blanca was Blanca de Borbón, who married Peter I  ̶ the Cruel or the Avenger, depending on who say it ̶  and on the second day she was repudiated and imprisoned successively in a dozen Spanish fortresses. Her life ended in this one, when she was 28 years old, a life cut short by the arrow of a crossbowman commanded by the king.

That is, at least, what a unique character of Medina Sidonia, Mariano Pardo de Figueroa y de la Serna, directed to be put in a 19th-century inscription, barely legible today. He wrote all along his entire life and virtually always from here, under the pseudonym Doctor Thebussen (in Spanish “Embuste” –humbug– when read backwards).

Don Mariano wrote articles almost about everything, but he put special love in the dissemination of Gastronomy as a science and in a social phenomenon that started in that time: Philately. He deserves the honour of being the first one, in 1873, to put into circulation a means of tourism and communication that has practically fallen into disuse today: the postcard; Medina Sidonia had, therefore, the first ones in Spain. Both regarding the field of gastronomy and the promotion of the postcard, Thebussem would earn great tribute on behalf of the tourism industry. In his city he has the prize of a street named after him and, until some years ago, also a movie theatre. 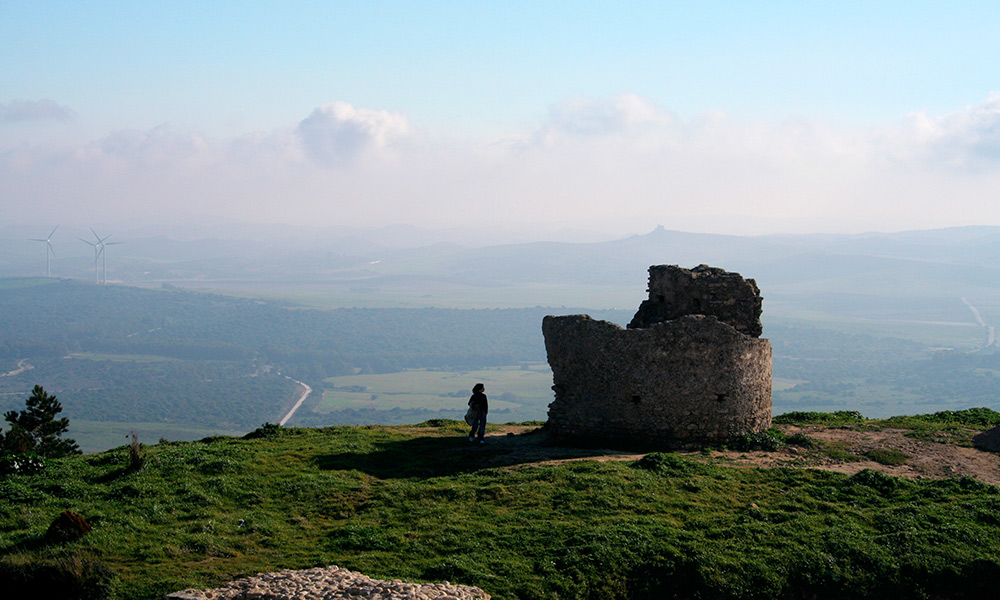 After a few moments, we have seen from the bell tower the seaside where thousands of people worked in the duke’s almadrabas[1]; now we return to earth and start our way down to the city centre surrounding the constructions of the nobility’s fortress. We pass by the Stables, restored but closed, and we plunge ourselves again into the whiteness of the houses with wooden shutters in their balconies and courtyards, white-washed year after year until the layers of lime mould into curious forms the steps of the stairways and the edges of the wells.

A tinao roofs a street and turns it into a passageway, and on the slopes of the lanes our footsteps resound on a life-time cobblestone pavement.

[1] Almadraba. It is a word of Andalusí origin to name a technique for catching tuna, used since pre-Roman times, by taking advance of the Atlantic-Mediterranean (and vice versa) migrations.