Madrid once belonged to al-Andalus. Scarcely 150 years after Tarik disembarked on the Iberian Peninsula, Muhammad Ibn Abd-er-Rahman al-Awsat, emir of Córdoba, decided to build a wall around Madjri t .

From then on, Abd-er-Rahman II’s son, Muhammad I will appear in every history book as the founder of this noble city of al-Andalus, as geographer al-Himyari stated.

In the South of Spain, people quite often feel proud of their al-Andalus past, considering such a heritage an undeniable benefit of our historic past. As a Madrid native and author of a novel inspired in Islamic Madrid, I wonder: Why then do we, people from Madrid, not feel equally proud of that Islamic past that compares us with the grandeur of Cordoba, Toledo or Granada?

Madrid must not have been different from other cities of al-Andalus. Located close to the Iberian Peninsula’s Marca Media (middle border area) Madjrit was built as a frontier, and hence, defensive city. In my novel Maŷritentre dos murallas(Madjrit between two walls), I recreate the atmosphere of what Madrid might have been like back in the 11th century: “Madjritwas not as untidy and mature a city as Cordoba was. It was a young city. Nobody was making sure of cleaning the streets, dirty with the excrement of horses and camels. No one established order in the market, not even the almotacén, (public employee in charge of controlling weights and measures) because it was obvious that there were none”. 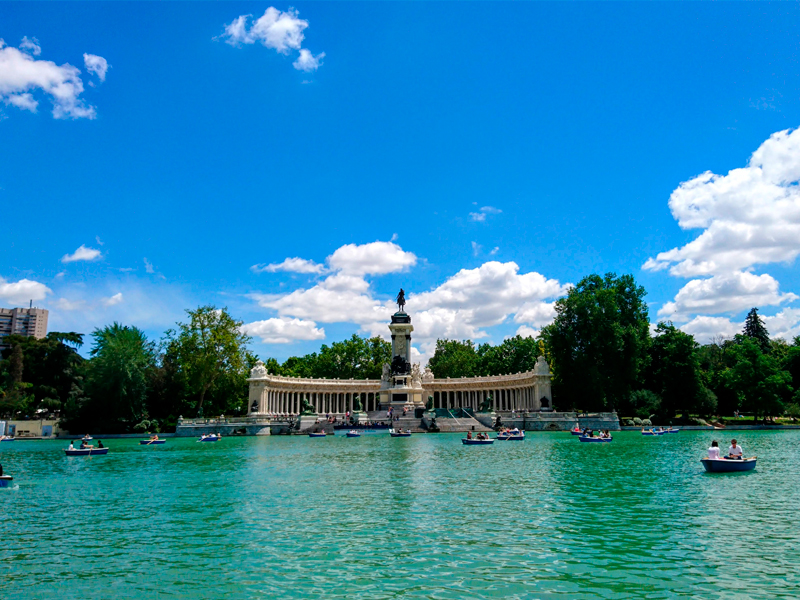 The first wall of Madjrit had three gates: Puerta de la Mezquita (Gate of the Mosque), named this because its proximity to downtown, and which was later named Puerta de Santa María (Gate of Saint Mary) or Arco de la Almudena (Arch of La Almudena), which connected the military area with the civil one. Puerta de la Vega, which opened toward the river, and, finally, Puerta de la Xagra (Gate of Xagra), which owes its name to its location, as it was facing the immensity of the countryside. The extension of the wall of Madrid, the first to be built in Madrid, had the following itinerary: Cuesta de la Vega, Cuesta de Ramón, Pretil de los Consejos (behind the Capitanía General building), and Factor, Rebeque and Bailén Streets, that turned back to its origin in the same area of the alcázar.

The Puerta de la Vega had a railing that concealed two interior rooms and stairs which connected with the upper floor. Inside, a huge iron weight was used in wartime to attack an enemy that tried to pass through. Of this gate we only have the description left by Quintana, in the year 1629. It is a very detailed one, and thanks to this, together with the plan by Pedro Texeira from 1656, we can still see how it was. Its similarity to Toledo’s Puerta de la Bisagra leads us to the conclusion of a Madjrit that is something real and close. If we could make a hypothetical archaeological dig, going deeply into the ground at the intersection of Mayor and Bailén Streets, it is quite possible that we will find them, or their remains, of course very much changed, for they were modified in the 16th and 17th centuries, and their foundations were removed from its position.

As for Puerta de Santa María, or De La Almudena ─whose construction should be something like that of Puerta de la Vega─ it was located in the very centre of Mayor Street, near Sacramento Street. 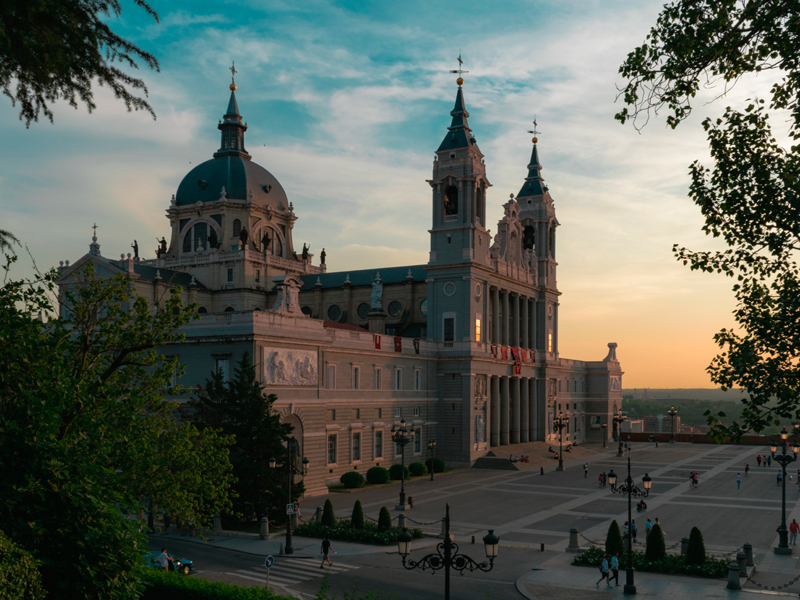 We still have clear remains of all this, although not much. The most outstanding are in the Mohamed I Park, by the Cuesta de la Vega, in the plots numbered 83 and 85. It is believed that they are the oldest remains found so far: ashlars alternating headers and stretchers in caliphal style. They are made out of flint and silex in their lower part. Due to the impact of Christian projectiles on this material arose the phrase “Over water I was built, my walls are made of fire”.

This is a lonely park. Given its location, out of the busy Bailén Street, in the rear part of the cathedral, and with no signs for passers-by, the site appears to us as something with no interest, only recognisable for the people from Madrid over summer, when they visit it, not to look at it as their own legacy, but as the place where open-air musical evenings take place. Many of those who have had dinner there ignore that a section of 120 metres long of a wall from al-Andalus times, with seven towers -four still stand today, as well as two marked in the plan- were just in front of them.

At number 12 of Bailén Street, but following the itinerary of Cuesta de la Vega close to Cuesta de Ramón, almost by the foundations of the Viaducto (Viaduct), vestiges of a small tower from al-Andalus’ epoch still remain. Despite being subjected to vandalism and having served as the support of a property built on its back in 1958, the tower is in good condition. We have tried to highlight the skill of the bricklayers from al-Andalus, both regarding the Muslim wall and the Christian one. They have been used for centuries as load-bearing walls in houses, some of which are still in a perfect state for their inhabitants. In front of this tower, and in the parking area for the house, another small fragment is preserved.

In the same Bailén Street, near the Senate premises, we find an almost insignificant piece of wall, valuable though, from which some think it was related to the Puerta de Xagra. Regarding this stretch, one of the oldest ones, there are some who think that it should belong to the outskirts of the gate built in Christian times, that is to say, that it had to be part of the second wall. 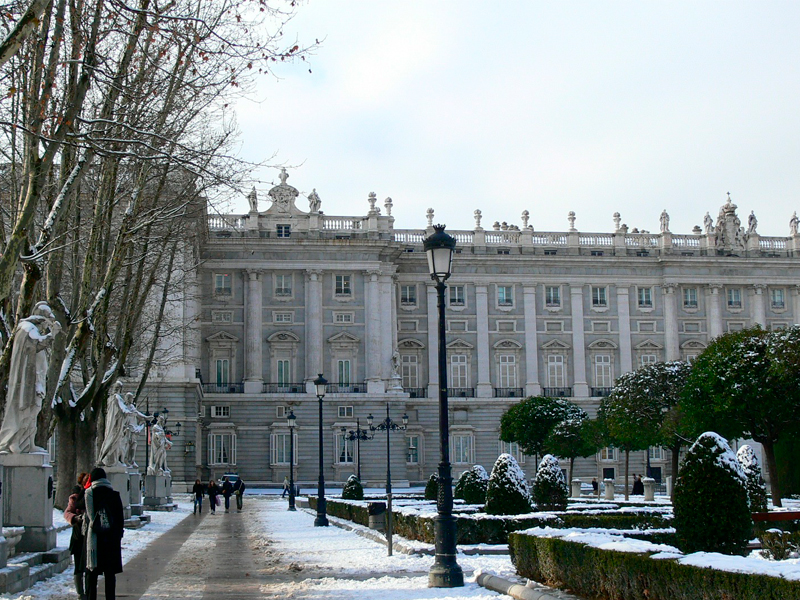 The last of the Islamic remains of Madrid was found while works in the Plaza de Oriente underground car park were being done. It is a watchtower dating from the 11th century, which is now shown, protected by a glass case, in the plaza’s parking lot.

From the archaeological digs made in Plaza de Oriente, we have very interesting pottery, comparable to the one produced in the best times in Córdoba: “There is in Madrid certain soil used to make cauldrons that can be used for cooking for twenty years, without breaking. Food prepared in them does not decompose in the hot season”, according to Abd Almuminin al-Himyari. This land was carved out by channels, true water roads that might have been built by Arabs, possibly after Christians won the city back. As Isabel Gea Ortigas writes in her book Los viajes de agua de Madrid, (The water roads of Madrid), these itineraries have been the authentic originality of Madrid over the centuries. “Three different cities themselves have had water provisioned this way over the centuries: Madrid, Marrakesh and Tehran. Madrid stopped using this system in 1858, when the Channel of Isabel II was inaugurated”. 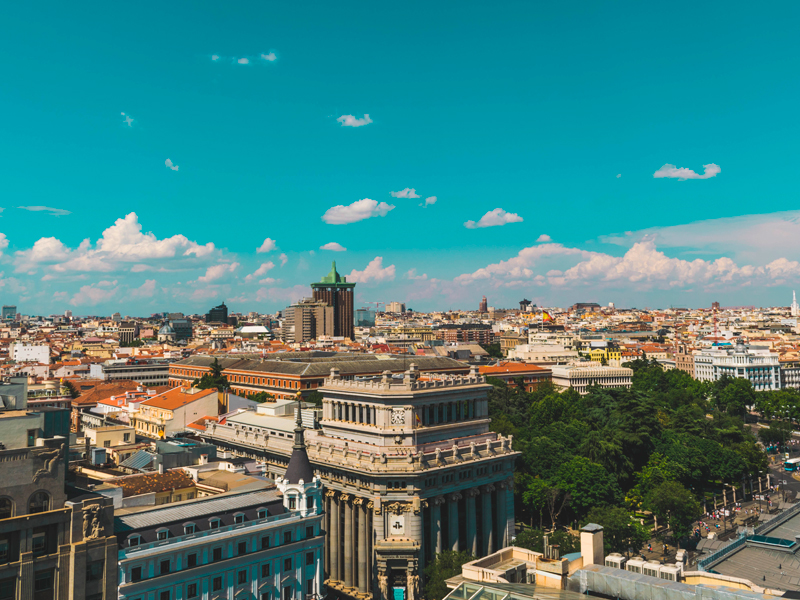 Yet, Madrid’s legacy of al-Andalus is not only within the enclosure of the walls. What we have is not much, although much more could have been brought to surface if archaeology had had even a small chance. It is true, however, that preserving an archaeological legacy in the face of the building of flats in an urban centre is a common problem in modern cities.

The historic legacy that Madrid has inherited from al-Andalus is not only physical. It is found not only in archaeology. It should be necessary to go deeply into the influence that, over centuries, had regulated the daily life of such a deep-rooted community. The the silos found in the city give a clear account of it and their function as clues to provide important data to archaeologists. To start with, we could and must remember that our Virgin of Almudena takes her name from a curious legend linked to the fall of Madrid. Its very reconquest, as well as the effort that Castilians put into climbing the Muslim walls, gave the name of “gatos” (cats) to the people from Madrid. Yet, among the many legacies from al-Andalus, the name of the city is a compendium of all of them, as it is a name which means waterway, meaning in Arabic mayras, the name that was to be later Madjrit.

There were men of science from Madridwho were well-known as Maslama, named al-Madjriti, (that is to say, man from Madrid) whose studies in the fields of astronomy and mathematics did not leave indifferent to either kings or wise men.

The past of al-Andalus in Madrid is crying out to be recognized. Perhaps, in the future, there will be other legacies discovered, Roman or Visigothic, of more significance. But in the meantime, we cannot remain indifferent to the data and ignore history. Meanwhile, it must be stressed that, in order to be recognized by people of Madrid, Spanish and foreigners, the remains of Madrid’s first wall must be preserved now as the remains of the oldest wall from the times of al-Andalus in Spain, which makes it invaluable.

By Carolina Molina.
Is a journalist and author of historic novel