The history of La Alpujarra had already appeared in texts of the classical authors of old. Lanjarón is famous in our days for its medicinal waters, for being the threshold of this Granadan region and the obligatory way for travellers who visit it, whose literary testimonials certify its beauty. Pedro Antonio de Alarcón (1833-1891), an author and politician born in Guadix, wrote: “Lanjarón is a dream of poets”.

In this region, monuments are not the ones that tell us about the past. Here, the landscape keeps the secret of its long history. Centuries-old chestnuts and olive trees, and other species of varied foliage, cliffs and disturbing gorges looking out to the abysses of ravines, and the white summits of the Sierra Nevada have witnessed the story in a landscape that speaks to us. Here took place feats and events, played on the same stage by many different actors.
The echo of battles, sieges and exiles seems to have remained stored in the cliffs and gorges, which succumbs nonetheless before the stillness of the landscape that opens before our eyes.
Not in vain, this site is also widely known for being one of those spots where relaxation emanates from the contemplation of a primitive nature at its purest, and a stillness barely broken by the rumour of the water that flows through rivers and cascades.
The mountain road that takes us to the “spa-city”, which in the past was a trail that wound down through cliffs and slopes and was traversed by pack animals, military wagons, stagecoaches… In our days, other transportation brings visitors here, eager to enjoy nature and relax, and newcomers are enthralled before such an awe-inspiring landscape. In the fifties of the last century, the thermal spa business drew the influx of people searching for peace of mind and body in the famous spa, which attracted people maybe following the fashion and emulating the distinguished nineteenth-century ambience of the Central Europe thermal resorts. 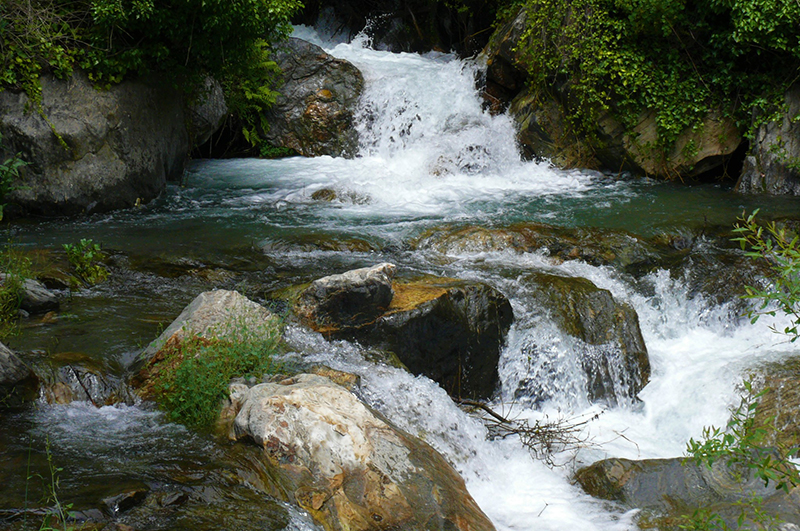 The name Lanjarón comes from an Arabic term meaning “land of springs”.

Photo: Cascade in the Lanjarón river.

Like every strategic enclave, the area prompted the envy of Romans, Arabs and Castilians. History, which acquires a sense of tangibility when it connects us with the past in places like this, shows us the first historic milestone that we find on our way: the ancient bridge of Tablate. Hidden among ravines and arousing very little attraction, it awaits to be discovered in the silence of a fairly isolated landscape. Despite its minimal engineering ̶ as it has one arch only and crosses a narrow although deep ravine ̶ the bridge served in one of the most important battles that took place in 1590, during the Alpujarras War, when the hosts of the armies of the Marquis of Mondéjar arrived to suppress the revolt of the moriscos whose captain was Aben Humeya.

Lanjaron’s place name comes from the Arabic al-Lancharon, which derives from al-Lanchar,, or “land of springs” whose name was already known in the 10th century. In those times, the Granada region, given its particular geographic situation and its natural and climatic conditions, was renowned because of its production of plants that were used in pharmacopoeia ̶ due to the apogee of medicine in the times of al-Andalus, as shown by the many treatises and medical advances produced ̶ and, hence, the benefit from widespread apiculture, or beekeeping. Numerous sources, such as Ahmad Muhammad ben Musa al-Razi (885-955), when describing the city of Elvira (early Granada), wrote about the enormous production of medical plants, mainly in Xolair (Sierra Nevada), most of which were maintained for the nourishment of bees that produced excellent honey.

In the 14th century, Ibn al-Khatib also reports the prolific honey production in Granada under Nasrid rule, and a century later, as the Catholic conquest of the kingdom was taking place, a vast number of chronicles keep on reporting it. Henríquez de la Jorquera, in his work Anales de Granada. Descripción del reino y ciudad de Granada. Crónica de la Reconquista (1482-1492). Sucesos de los años 1588 a 1646 writes about the importance of honey production in the Kingdom of Granada, in Sierra Nevada. King Fernado VI mandated the collection of all information of the Kingdom of Granada to undertake a system of tax reform, and the resulting census included chapter entitled Libro de oficios de la ciudad de Granada (1752) (The Book of professions of the city of Granada) where a specific reference was made to the figure of “hive keeper”. There were true professionals who owned a vast number of hives, which made it worth the author dedicating a chapter exclusively to them, reporting their existing number and the economic benefits that wax and honey produced. In another part of the aforementioned census, entitled “Libros de Respuestas Generales y Particulares” (“Book of General and Particular Answers”) the following data is included: 900 people were engaged in apiculture at that time, and in Granada and its zones alone there were some 10,231 hives accounted for.

The Museum of Honey of Lanjarón shows this interesting history and evolution of this heritage, for which this city is also known, sometimes worth visiting specifically to enjoy also its gastronomy, since its mountain cuisine is widely renowned.

A few kilometres up the ascent to Lanjarón on a side road that detours from the Granada motorway toward the coast, Lanjarón appears as if out of the blue, around a curve, garrisoned by mountains buttressing the back side of Sierra Nevada. It seems as if it was lying peacefully on the slope of the Bordaila mountain, before the deep hollow of the Salado ravine. 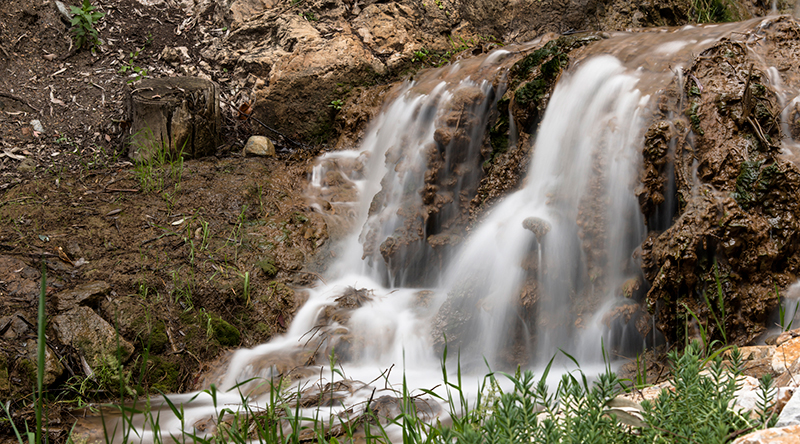 Spring at the Salado ravine.

From the crest of the side opposite the ravine, the Arab castle surveys its surroundings and, despite being a faithful watchman, it could not prevent the surprise attack of the armies of Catholic King Ferdinand, in 1550, during the Moriscos War. According to a chronicle dated 8th March of that year ̶ whose accuracy hovers over reality and legend ̶ , the brave black captain in charge of defending the stronghold preferred to throw himself into the void from the top of the donjon tower to avoid the humiliation of surrender and defeat. 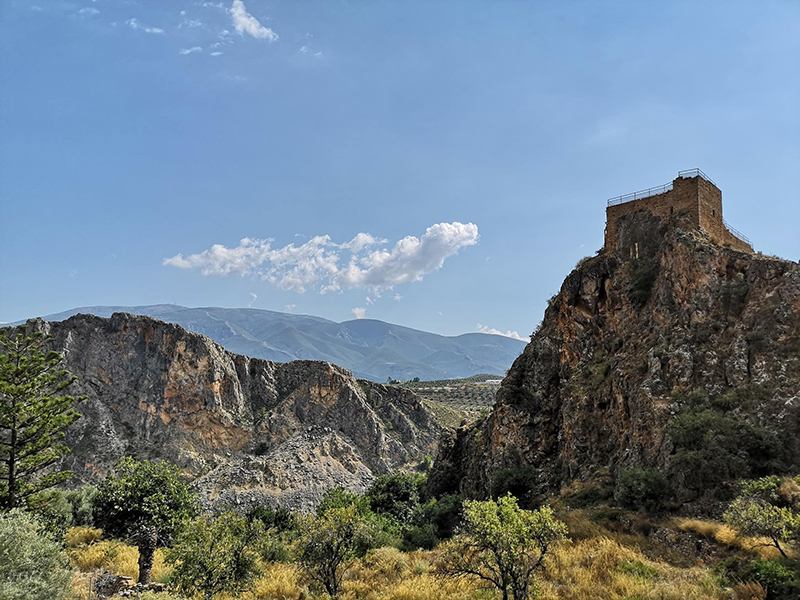 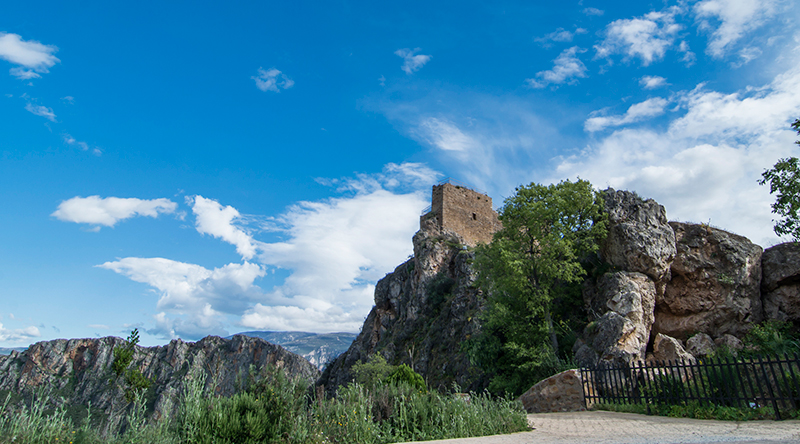 Different perspectives of the remains of the Arab castle.

The reason why the building of castles proliferated in La Alpujarra, mainly in caliphal times, was of essential importance, considering that they were the system used by the State to control the population centres, which consisted of settlements of peasants territorially organized in alquerías (hamlets) spread all over the area. Farmers counted on great advantages in mountain areas like this, with an abundance of water that allowed the cattle to graze, the development of non-seasonal cultivation as well as the many new species introduced by the Arabs. 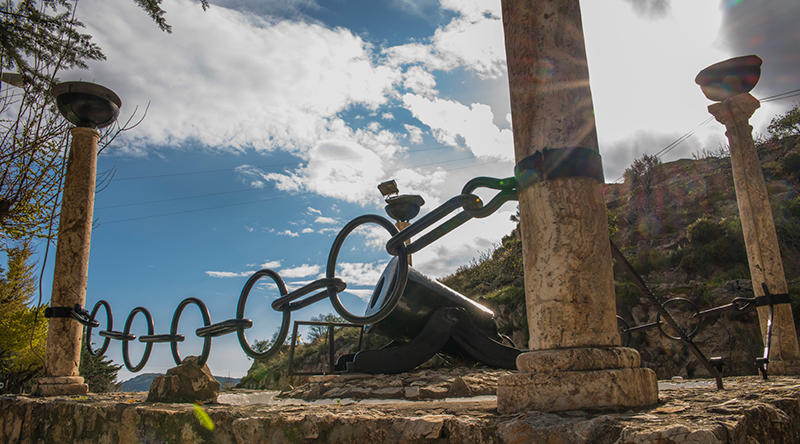 The inaccessible castle can be seen from a privileged viewpoint located on the opposite side, named Hill of the Cannons, which holds its own story too: it was so named because in it there are exhibited pieces of artillery used in the Independence War against the French, who also left their mark here.

As the so-called “Gateway to the Alpujarras,” as it has been named, Lanjarón has opened the way to travellers eager to reach those beautiful spots and explore the hidden side of Sierra Nevada. The great British hispanist Gerald Brenan discovered and made famous to the world the Alpujarras through his work Al sur de Granada (South from Granada).He received in his Alpujarras residence his British peers, outstanding artists and intellectuals who belonged to the Bloomsbury group, like Virginia Woolf, Dora Carrington and Lytton Strachey, among others, to which Brenan also belonged and named after the elegant London neighbourhood where they met. The antagonism between the sophistication of this literary-group atmosphere and the simple lifestyles in raw nature could not have been more radical. The Alpujarras ambience dug deep into these artists’ fledging ideals as they were considered the renovators of the British intellectual scene, bearing pacifism as their standard, at at time when the wounds of the First World War still lay open. Hence their predilection for this Granadan region. It was not only the serenity, which nevertheless emanated from an overwhelming landscape: the smoothness of its mountain slopes that ended in abrupt canyons, and the mildness of its climate despite its proximity of the snowy summits of Sierra Nevada. 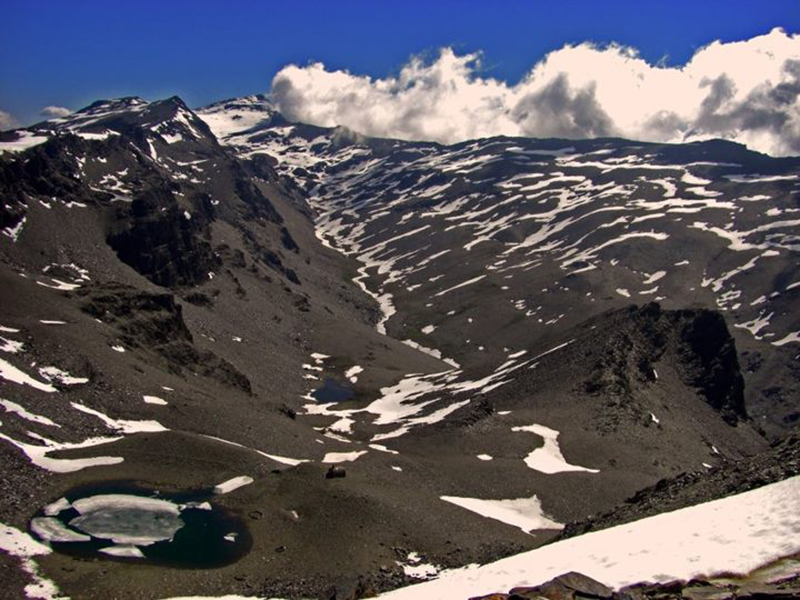 View if the ponds on the south side of the Cerro del Caballo.

Included in the Route of the Alpujarras of El legado andalusí, Lanjarón shows one more facet out of the many that this route offers as it runs through a very diverse environment. Departing from Almería and going on through deserts, fertile plains and valleys planted with citruses ̶ whose abundance is the paradigm of the agriculture of al-Andalus ̶ mountain areas and villages full of medieval remains that recall the lustre of ages past, some of them having been residences of the powerful, other important for defensive reasons.

This ancient road is an important bastion of the heritage of al-Andalus, given the endurance in the region of a rural society that has preserved its farming systems as well as its art and popular culture, in a natural environment that has resisted, immobile, the passage of time.