Espejo, the sentinel on the hill

Thanks toits status as a border land with the Kingdom of Granada,the town of Espejo, in the province of Córdoba, is one of the most interesting stopovers on the Route of the Caliphate, promoted by the Foundation El legado andalusí.

“I departed Córdoba for Granada taking the horseshoe road. Once I went through the Guadalquivir river, I traversed quite a good piece of the Cordoban countryside, an excellent land given its fertility for grains. All of it is crossed by small hills and therefore one is going up and down constantly… Four leagues away from this route, we spot the burg of Espejo, known in former times as Claritas Julia … it is located in a high place…” This was how the indefatigable historian and artist, the enlightened Antonio Ponz started to trace his journey between Córdoba and Granada at the end of the 18th century, all along a thousand-year-old way that today is recovering its significance.

Espejo appears like a sentinel overlooking the immensity of the landscape, on the crest of an isolated ridge in the basin of the Guadajoz river ̶ the Guadalquivir’s tributary which articulates the southern Cordoban countryside and opens a natural way into the southeast. It is obvious that its position was of an extraordinary strategic importance, one that has been taken advantage of since earliest times, according to its abundant archaeology.

To the Neolithic testimonies we must add the existence of the remarkable Ibero-Turdetani fortified enclosure ensemble, Ucubi, dating from the middle of the first millennium B.C. Among the many findings, such as the sculpture of a bull, and a horse bridle, kept in the Spanish National Archaeological Museum, as well as urns and swords, the prominence of Ucubi, is spotlighted; it would have played a significant role in the struggles between Caesar and Pompeius’ sons in Andalusian territory. Therefore, in the year 40 B.C. the town was occupied by Gnaeus Pompeius, who ordered the killing of dozens of its inhabitants who were supporters of Caesar. After its conquest, Caesar gave the town the apparatus of Roman municipality under the name of Colonia Claritas Iulia Ucubi, as a reward for its loyalty. A very prosperous period came then to this selected town, homeland of Annius Verus, grandfather of the emperor Marcus Aurelius, as shown by the remains found, which consist of defensive walls, pipes, an aqueduct, sculptures, inscriptions, a sarcophagus and coins, among others, which show its urban and demographic development.

Later on, in Visigoths’ times and next the Muslims, the shine of Espejo nevertheless paled. This was maybe due to the rise of other rural settlements that spread around, and of other nearby villages, like Castro del Río.

In the period of al-Andalus, the place ̶ named al-Qalat, the fortress ̶ was reduced to a watch-point hardly inhabited at all, according to the first news that came after the Christian conquest, which took place around 1240, as the region was occupied by the King Ferdinand III. According to records, since 1260 the place belonged to the family of Pay Arias de Castro, being then known as “Las Torres de Pay Arias” (The Towers of Pay Arias), until in 1303 Ferdinand IV gave it the Latin appellation of specula ̶ meaning “watchtower”, “lookout tower” as a clear reference to its position ̶ by endorsing its lordship and supporting its repopulation, the town being founded as such in 1307. The powerful mogul Pay Arias de Castro, apart from being the queen’s cupbearer, was ambassador to the papacy, Governing Mayor of Córdoba, Lord of Castro el Viejo and one of the main promoters of the feudal regime that expanded throughout the Cordoban south in the Late Middle Ages. Among his initiatives there was the strengthening of Espejo’s defences to protect their lands, to control the river Guadajoz’s course and to garrison this sparsely populated countryside which marked the border of the Nasrid Kingdom.

After several ups and downs, the domain of Espejo ended up being connected to those of Fernández de Córdoba, from the House of Aguilar, to be later included, in the 17th century, in the House of Medinaceli. In the 15th century, the town was to play a remarkable role in the civil wars that took place during Henry IV’s reign and in the clashes between the noble factions until peace was imposed by the Catholic Monarchs, upheavals that led to the raising of its formidable fortress. 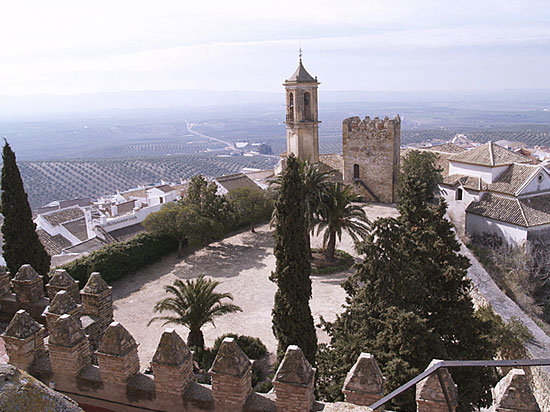 At those times, thanks to the further development that heralded the prosperity the 18th century brought along, the attractive face of this town of dignified air and farming potential was forged, being fully focused on the cultivation of cereals, olive trees and grapevines. The sturdy silhouette of the castle dominates the hill where the town sits, overlooking a vast horizon of fields and villages. It forms a compact rectangle built with cut stone, with towers in the corners and another one protecting the entrance. The Homage Tower stands out in the ensemble, its interior being arranged around the parade ground, now a porticoed yard with an underground cistern. Its construction was started in the 14th century by Pay Arias on Roman and Arab foundations and its final configuration is mainly owed to works undertaken in the 15th century and to a further refurbishing made to adapt it into a residence, now owned by the Duchess of Osuna, who keep in its rooms part of her painting collection. The castle is surrounded by a walled perimeter that belts the upper plateau of the hill and is connected with the parish church and Torre Caballero, a freestanding tower with a beautiful ogival opening. In a superb state of conservation, the castle of Pay Arias stands out as a unique example of the Cordoban medieval fortifications.

From its summit to the foot of its slopes, Espejo unfolds an urban centre of a concentric plan, which reveals its expansion from the base of the castle. In the highest part, the older sector is shaped among fragments of walls and towers. It is composed of a tight irregular plot of winding streets and steep hills that unveils it medieval origin: Carril de las Cruces, San Bartolomé street, which slips towards Plaza de España, the convoluted lanes of the Barrionuevo, the Plaza de la Constitución, up to the Paseo de Andalucía, now the centre of longer and more level roads as a result of the increase of population that took place from the 18th century. 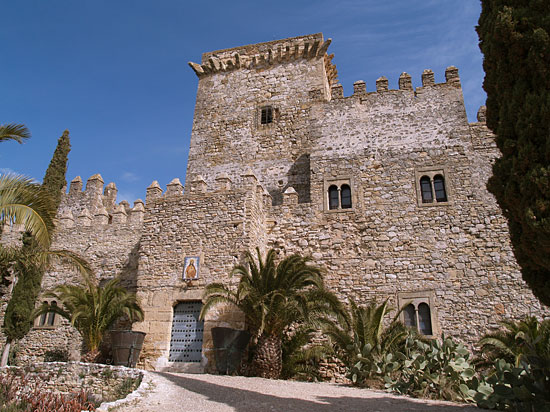 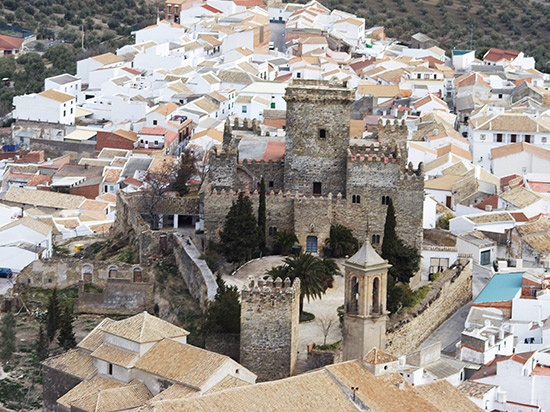 In the shadow of the fortress stands the most remarkable religious monument of Espejo, the parish church of San José, a building whose humble façade contrasts with the variety of its interior. Its basic work corresponds to the building that was undertaken at the end of the 15th century, consisting of a design which included three naves with lateral chapels with flats fronts, a gothic intervention later modified by successive remodelling.

By the end of the 16th century, its enlargement was made, as well as the construction of the chapel of the Nazareno ̶ before dedicated to the patron, the Virgen de la Fuensanta ̶ which, given its scale, constitutes an autonomous temple inside the church. While the exterior of the church shows only a tower and simple façades with a classical style, inside we can see arches with Gothic-ribbed vaults in the front, and chapels and pillars with twisting, half columns shafts of a later Gothic style. The main altarpiece deserves special attention, as it is one of the most prominent in the province, from the late 15th century or the beginning of the 16th. Its Gothic structure has a refined carving which hosts five panels, one of them painted by Pedro Romana, to whom the ensemble is attributed, the most significant member of the Cordoban painting school during the transition from Gothic to Renaissance. In his scenes, the resources of the medieval tradition are combined with the gildings, with Flemish touches as shown in the iconography of the figures, and Italian in the aesthetic architecture and landscapes in the backgrounds. In a lateral chapel another jewel of this church is on exhibit: the Treasure, a sumptuous parish museum of gold and silversmithing that comprises about forty objects from the 16th to the 20th centuries, which includes authentic masterpieces by the Cordoban silversmiths in Gothic, Plateresque, Classic and Baroque styles. Worth mentioning are the exquisite parish cross and the superb custody 1.6 metres high and crafted by the silversmith Bernabé García de los Reyes in 1726 in Churrigueresque style.

The broad monumental catalogue of Espejo expands along its streets, interspersed with manor houses like that of Antón Gómez, from the end of the 16th century, and that of Las Cadenas, in the upper part, and others of Baroque style from the 17th and 18th centuries toward the Paseo de Andalucía.

Concerning the religious buildings, these include the Colegio de San Miguel, founded in 1758, with a singular Baroque oratory, a centred building supported by a vault that sits on an octagon; the hermit of the Virgen the la Cabeza that is also dated from the 18th century; the hermitages of Santa Rita, which marks one of the most interesting corners of Espejo, and Santo Domingo, both with stone façades, which are located, respectively, at both ends of the old quarter.

The prolix background of Espejo’s past even has another testimony in its outskirts, next to the road to Castro del Río: the Aljibe (cistern), an enigmatic Roman construction, vaulted with ashlars, built on a spring, probably for a religious purpose.

The saint-king, born in 1200, acceded in 1217 to the throne of Castile, whose crown was ultimately unified with that of León in 1230. Since he was a young man, he took control of the internal tensions that menaced both kingdoms by redirecting a vigorous policy towards the domination of the powers from Al-Andalus, plunged into a deep crisis due to the Navas de Tolosa’s defeat in 1212 and the crisis of Almohad empire. Combining a clever strategy of pacts with al-Bayyasi, the emir of Baeza, he undertook the most decisive series of conquests achieved by a Christian sovereign: Baeza in 1226, Úbeda in 1233, Córdoba in 1236, Jaén in 1246, Seville in 1248. By the end of his reign, the brilliant capital city of the Umayyads, the seat of the Almohad caliphate, the Guadalquivir river valley, the greater part of Andalusia, the core of al-Andalus, was all in his hands. This achievement, which raised him to sainthood remained as a symbol in his desire to rest in the lands he won, in Seville, where he passed away in 1252. Few were the advances that his successors made in comparison, until the coming of the Catholic Monarchs at the end of the 15th century. Almost for two and a half centuries, the division in Andalusia between Christians and Muslims was essentially established by Ferdinand III. 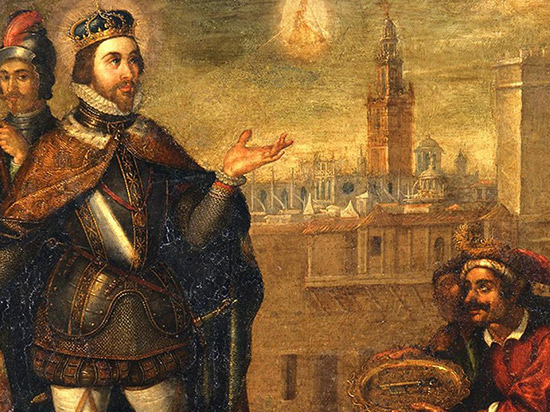 He is a historian, author and publisher.