The Blind Man of Cabra and popular lyrics in al-Andalus

These poetical compositions were favourites of al-Andalus, fervently declaimed and sung both by Andalusí and Jewish poets. Together with this fabulous discovery, another variety of strophic verse, the zéjel that, was also written un vernacular Arabic, often interspersed the insertions of expressions and words in Mozarabic, something common among the inhabitants of al-Andalus.

The invention of the muwashshah is attributed to a poet known as Muhammad Ibn Muqaddam al-Qabri the Blind man of Cabra, a contemporary of the Emirate of Córdoba under the rule of Abd Allah (843?- 912). The poet walked the streets and public spaces as markets or squares, lending his ears to the people, from whom he heard anecdotes or popular verses, the material with which he elaborated his poetical compositions. From this came the popularity of his poetry, as proven by the fact of its repetition by other poets in their own same jarchas, with slight variations, but sharing the same subject: love of women, put into the mouths of women but written by men, which dealt with the unrequited love, the “udrí love”. Coming out of the oldest poetical tradition of Arabia –Bedouin poetry ̶  it gave birth in the Middle Ages to the poetical genre known as “courtly love” or “chivalry poetry”, sung by troubadours from castle to castle.

Thanks to the Sephardic Jews’ collections, be them translations or their own productions, we have been able to assemble important information such as this, as well as the necessary data about the relentless theories on the origin of the jarchas[1].

In 1948, a collection of twenty jarchas, in semi-destroyed manuscripts, was found in a synagogue in al-Fustat, in Cairo. The scholars Stern and Emilio García Gómez relied on them in support of the thesis of the Arab-Andalusian origin of Romanic poetry.

On the other hand, we must consider other ascertained data. Mª Jesús Rubiera highlights the existence of Romanic terms in the jarchas, as well as traits of a poetry from beyond the Pyrenees, “prior to the troubadour’s poetry”.

[1] Traditional song in Mozarabic language with which the Arab or Hebrew poets from Al-Andalus closed the muwashshah.

This freedman was assigned to attend some Christian ambassadors who had arrived at Córdoba. Salim delayed the departure of the embassy  ̶ we know that the embassy was Charlemagne’s, in 807 ̶  so he could have time to learn from their music. He set himself to combine what he learned with the singing of a slave from Iraq. This attempt to alternate the Christian chant with the Arabic of al-Andalus was to bear its fruit later with the Blindman of Cabra. According to Mª Jesús Rubiera, Salim was probably an old slave from the North, and this could be the reason why he was charged with receiving his fellow countrymen. It is quite probable that he had learnt the winileodas or “friendsongs”, which in the year 789 Charlemagne had prohibited the nuns in the abbeys to compose them. 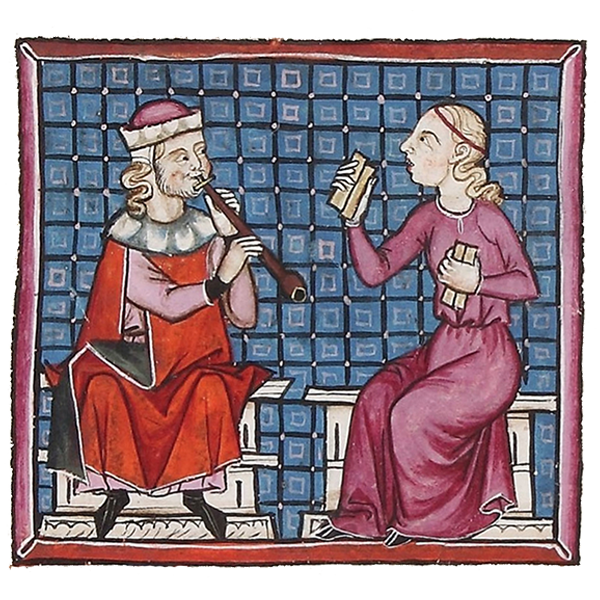 We can see how the influence in later medieval literature was to be mutual: the “moaxajeros” poets (muwashshah composers) collected Romanic tunes and applied them to a new poetic solution. Many of these little songs are written in Occitan language, others in Galician and others in Portuguese, which confirms that the jarcha was followed from a basis of a multilingual literature.

A great part of the literature developed in al-Andalus can be known today thanks to the poetic anthologies compiled by authors like Ibn al-Kattani (late 10th century), who entitled his work Book of Comparisons. He took up fragments of poems from al-Andalus from the 9th and 10th centuries; his work was used in choral schools. Ibn Faray of Jaén (10th century) composed The Workbook of Orchards, and Ibn Sa’id al-Maghribi (12th-13th centuries) Rayat al-mubarrazin, (Banners of the Champions).

Besides, we have codexes such as that of the synagogue of al-Fustat in Egypt, and the one supposedly found in the synagogue in New York, which had been gathered by Sephardic Jews.

From the Blindman of Cabra on, we will know more composers of muwashshah, as Ibn Bassam tells us. One more example is another poet from Córdoba, Abu Bakr Yahyá Ibn Baqi (d. 1145), author of muwashshah and poems in classic style. We find other exemplary representatives in a master and his pupil, both of them from the court  in the Kingdom of Granada: Ibn al Khatib (1313-1374) and Ibn Zamrak (1333-1394).

While the muwashshah is increasingly associated to cultured poetry, which used classic Arabic for their jarchas, a variant of the primitive muwashshah, came into being: the zéjel.

This is a strophic stanza-based poetry characterised by being expressed in vulgar Arabic. Its structure is like the muwashshah, but devoid of jarcha. Its scheme is: aa bbba… and containing expressions in aljamiado style inserted in their verses. Given its roots, it was most suited for adaptation to Christian music. It was a manifestation of oral literature and an easy-going style, one that was even accused of being, among other adjectives, lascivious. It was created to express popular themes related to love, celebrations, games and even to tell about people’s significant events. 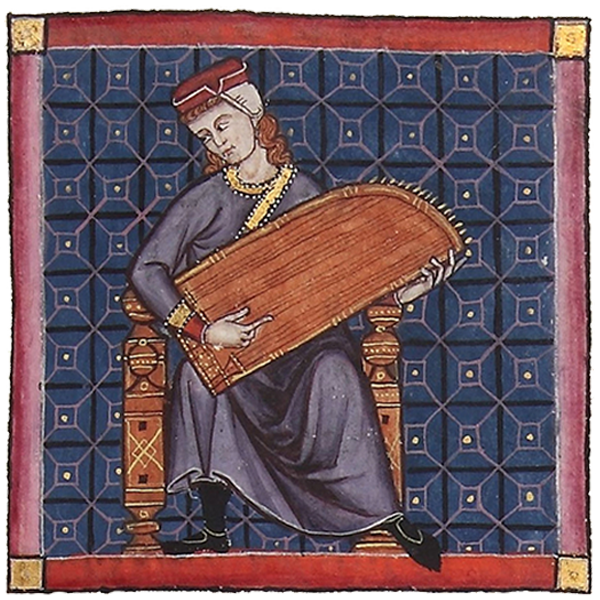 This is the theme that Ibn Quzman (1086-1160), deals with entirely, apart from his characteristic sarcasm about the vanity of power or the sins of the other. It was he who upgraded the level of this genre. About Quzman, we know of his Cordoban aristocratic origin. His diwan (collection of poems) is composed of 193 zéjeles. Some even claim that he was probably from the city of Cabra, like our creator of muwashshah, whose Romanic origin is also discussed, although in this case we are based on his family name Quzman  ̶ Guzmán ̶.

We know that his family fell into disgrace, losing their fortune, and that he led a bohemian life and that he was inclined to fall in love and gallant to women. He lived through quiet periods under the protection of his patrons, and through more turbulent ones, being harassed by his creditors, and even serving time in prison. However, his last years were more conservative, as deduced by his writings. He died in 1160.

The zéjel moves away to the neighbouring cultures (Castilian, French…) thanks to its musical and popular character, and it becomes the basis of the troubadours’ chants (a movement started in France by William of Aquitaine).

Manuel Cadaval Gil states that the troubadours from Provence used expressions like “obey” and “serve to love”, assimilating the service of the lady in the feudal service of vassalage, something that existed already in Arab literature (Ibn Zaydun and Ibn Hazm). We should also consider that already in 1133, we have documentation about the presence of troubadours from Provence in Spain. This fashion later went to the troubadours via the Galician-Portuguese language. Let us consider that in the Iberian Peninsula we have an important route for cultural exchange in the Camino de Santiago (Way of Saint James).

The influence of Arab poetry in Castilian troubadours appears included in the Cancionero de Baena (Baenas’s Songbook) that can be searched in the use of themes and forms like the muwashshah and the zéjel. 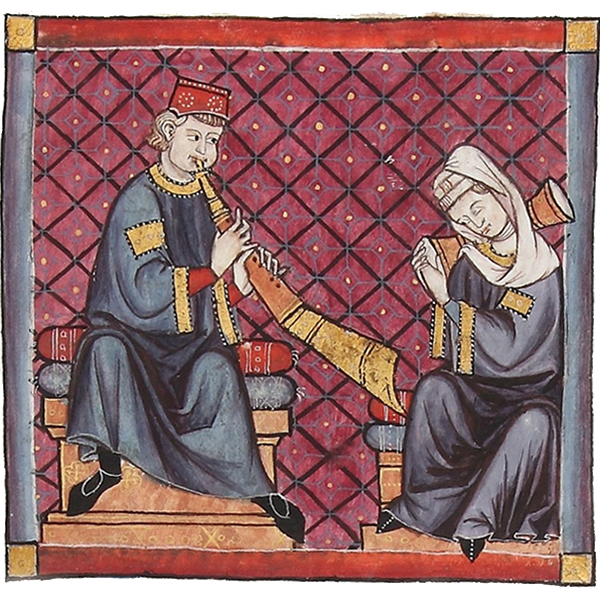 In the troubadours’ repertoire, the meaning of love appears linked to the submissive surrender of the lover to his lady. The idea of “service” for these minstrels had not its roots in Europe though; it reflects the feelings of the Arab poets according to the notion of courtly love. Ibn Quzman declares that philosophy of submissed love in several zéjeles.

We can explore that influence of the world of al-Andalus and on the Christian one and vice versa through the oral and musical character already mentioned. In the same way, we have to keep in mind the ebb and flow of people from the north of the Iberian Peninsula to the south.

With the conquest of territories by Christians, the population would get mixed with the so-called “Mozarabs” and their customs, such as the oral tradition.

But in a more formal way, we must keep in consideration the translations into Latin or Spanish of books in Arabic that were produced both in Toledo as well as in other cities, for example Seville. In this sense, the following facts, which can be considered a true milestone in the influence and dissemination of this poetry from al-Andalus, yet not only because of its transmission and oral dissemination, but also for its compilation in writing.

In the 10th century monasteries like Ripoll and San Millán de la Cogolla welcomed the knowledge that came from Córdoba. By the end of this century, Silvester II visited the monastery of Ripoll, hence contributing to promote the culture of Al-Andalus.

In the 11th century, the School for Latin-Arab studies with the participation of the Hebrews was founded. Among its funds, we can still find some surviving from the Cordoban Caliphal Library.

In the same century, important persons such as Peter “the Venerable”, the abbot of Cluny, arrived also in Toledo.

Alphonso X “the Wise” was inspired by the work done in the courts of the taifa kingdoms, and he started to make translations from Arabic into Spanish.

As a curious fact, we will mention that Juan Ruiz the Archpriest of Hita had significant contacts with Arab poetry. His father was a prisoner of the Muslims in Granada. Juan Ruiz was born in Alcalá la Real (Jaén) in the Banu Said family, and we know that he read Ibn Hazam’s work.

A clear example of this influence from al-Andalus can be found in a genre that represents traditional Spanish poetry: : the villancico[2]. This was one of the most dominant rhymes in the Iberian Peninsula during the 17th century. Villancicos are defined in the same terms as the Cantigas de Amigo (Friendsongs) although these have a wider thematic scope. Our interest must focus on metrics, since two types of villancicos can be differentiated, being one of these structures based on the Hispano-Arab zéjel (refrain + of three single-rhyme gloss lines + moving verse + refrain), hence the linking of the villancico with the common core of the muwashshah.

[2] The Villancico is a popular song with a poetic composition including a refrain which is repeated along the tune, nowadays a Christmas carol.

Almost everyone can remember the popular ditty “Las tres morillas” (“The three little Moorish girls”). Well then, its origin must be sought in a story by Harun al-Rashid: “The three slaves”.

In that way, we could deduce that the subject and the structures offered by the muwashshah and the zéjeles can be seen reflected in many of the carols we find in our Cancioneros(Songbooks), in the traditional Galician-Portuguese poetry, by way of the Cantigas de Amigo, (“Friendsongs”) in the compositions of the French troubadours, and in the Italian laudi. Similarity seems obvious with themes and poetry of the old Provencal troubadours ̶ Cercamon, William IX Duque of Aquitaine, Marcabru and Rudel ̶ where they revive, transformed, ideas and feelings adapting themselves to a different sensibility.

Once again we find, as in many other historical events with two-way paths, that in the end, what joins us together is what enriches us.