The Blind Man of Cabra and popular poetry in al-Andalus

These poetical compositions were favourites of al-Andalus, fervently declaimed and sung both by Andalusí and Jewish poets. Together with this fabulous discovery, another variety of strophic verse, the zéjel that, was also written un vernacular Arabic, often interspersed the insertions of expressions and words in Mozarabic, something common among the inhabitants of al-Andalus.

The invention of the muwashshah is attributed to a poet known as Muhammad Ibn Muqaddam al-Qabri the Blind man of Cabra, a contemporary of the Emirate of Córdoba under the rule of Abd Allah (843?- 912). The poet walked the streets and public spaces as markets or squares, lending his ears to the people, from whom he heard anecdotes or popular verses, the material with which he elaborated his poetical compositions. From this came the popularity of his poetry, as proven by the fact of its repetition by other poets in their own same jarchas, with slight variations, but sharing the same subject: love of women, put into the mouths of women but written by men, which dealt with the unrequited love, the “udrí love”. Coming out of the oldest poetical tradition of Arabia –Bedouin poetry ̶  it gave birth in the Middle Ages to the poetical genre known as “courtly love” or “chivalry poetry”, sung by troubadours from castle to castle.

And now, we go back to Abd Allah’s gathering, where we have also found another poet, known, as we have already said, as the Blind Man of Cabra. He, however represents another kind of poetry, one more popular and of greater importance, for it pooled his knowledge of cultured Arab poetry and a vernacular cultural base. 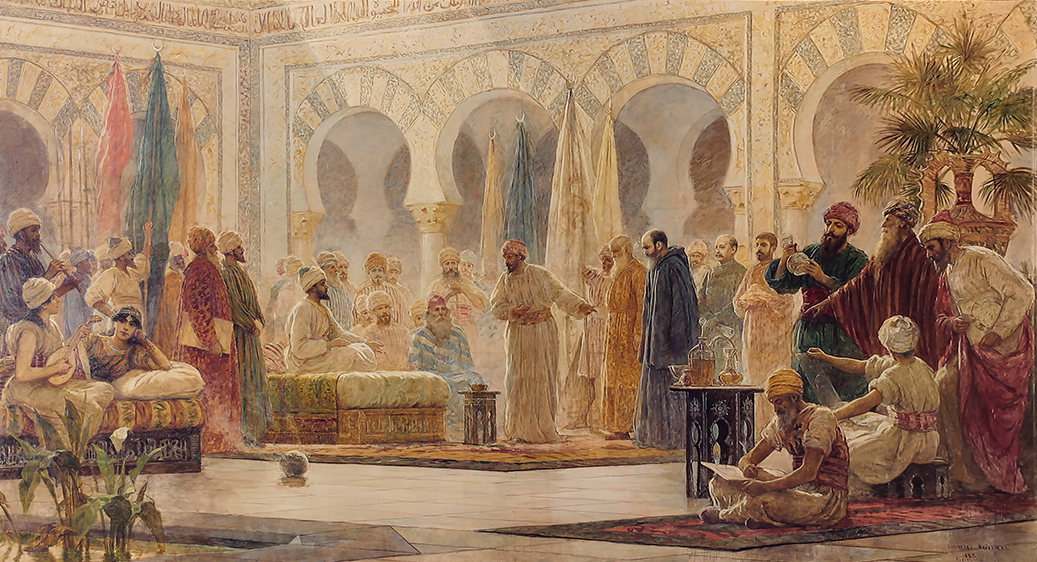 The Caliphate of Córdoba in times of Abd-er-Rahmam III, by the artist Dionís Baixeras i Verdaguer, 1885. The work is in the Paraninfo of the University of Barcelona.

Between the 10th and 13th centuries, Christians occupied territories with high concentrations of Muslim people, those who remained under Christian rule. They were losing gradually the use of Arabic language, which was substituted by the vernacular languages (Spanish, Aragonese, Catalan or Portuguese), which they wrote in Arabic characters, starting to call it in its whole “aljamiado language”. [1]. This we must keep in mind to speak about our personality: the Blind Man of Cabra.

Many are the names given to the author of the muwashshah: according to al-Hiyari (12th c.), his name is Muqaddam Ibn Muafa al-Qabri (847-920), while Ibn Bassam states that it would be Muhammad Ibn Hammud al Qabri al Makfuf (882-912).

In his native town he is known as “Ben Mocadem”, and we have a sculpture as a reminder of him in the ensemble of the Counts of Cabra’s palace.

But there is no doubt that both were poets born in Cabra (Córdoba), with similar chronology, both being connected to the emir Abd Allah’s court and sharing the practice of muwashshah. 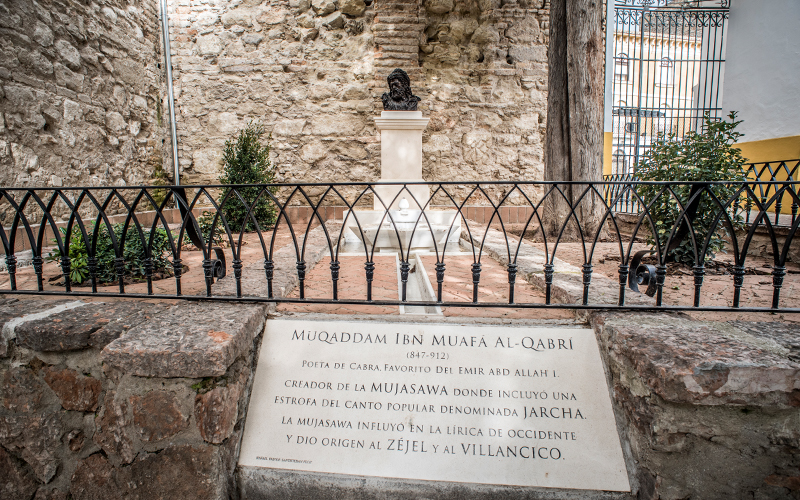 Space in the Neighbourhoud of La Villa dedicated to the Andalusí poet Muqaddam Ibn Muafa al-Qabri, the Blind Man of Cabra, in his hometown.

“Muwashshah are metrical forms much used by the people from al-Andalus; their theme is love. They are difficult to hear because they are kept in the pockets and in the hearts. The first one who used the metrical forms of the muwashshah, and who invented its rules, as far as I know, was Muhammad al-Mahmud, the Blind Man of Cabra, who composed muwashshah on hemistichs of Arab poems, although most of them used careless and unusual metres. He took an expression in vulgar Arabic or in a non-Arabic language which he called marqaz (jarcha in Spanish) and put the muwashshah over it without either intercalating or moving.”

Nevertheless, the creation of this popular poetic form has many other genealogies. Ibn Bassam continues:

“It is said that Ibn Abd Rabbih, the autor of The Necklace, was the one who composed the type of muwashshah which are known to us; then came Yusuf Ibn Harun al-Ramadi, who was the first in introducing the intercalating in the marqaz and placing every pause where it was needed, but only in the marqaz. Other poets like Mu’min Ibn Said and two sons of Abu l-Hassan followed. And then, Ubada Ibn Ma al-Sama came into the picture, inventing the interlacing pause, that consisted in fixing the places for pause in the movements and intercalating them as did al Ramadi in the marqaz.”

Ibn Khaldun clarifies that the Blind Man of Cabra would be “purebred Spanish”, whose main language would be the Romance; but his vulgarisms and aljamía did not prevent him from being one of the favourite poets of sultan Abd Allah.

Interior of the Homage Tower in the castle of the Counts of Cabra, with the outstanding Octagonal Hall inspired in the Neo-Mudejar style. 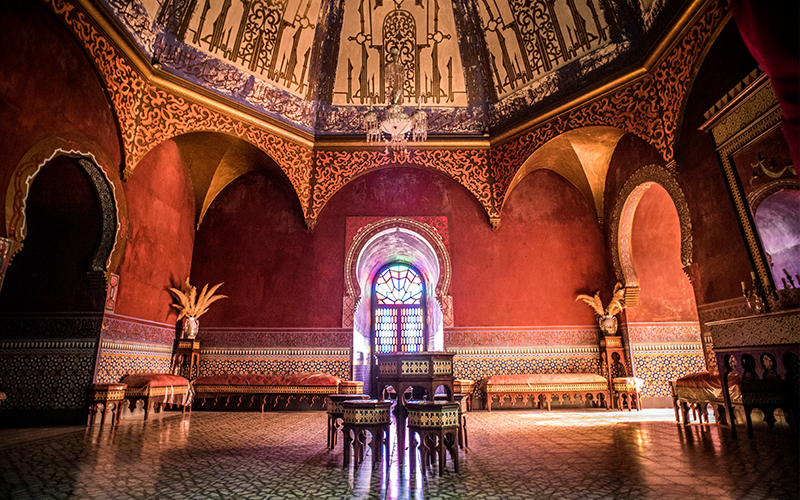 Antonio Roldán, chronicler of Cabra, calls him also “the seer”, and he showcases, in his book entitled La tradición oral. Salvar el Legado (The oral tradition. Save the legacy), a fascinating experience he loved related to al-Qabri.

He says that he met an old man at a lecture who had been an immigrant in New York for twenty-three years and that he belonged there to a Spanish-speaking group which organized cultural events. Among them, there was a Sephardic Jew, who had inherited through nineteen generations a key which opened a house in Lucena, a city nine kilometres from Cabra, both in the province of Córdoba. The heir took our narrator to an Israeli library in New York to show him some texts where the life of Muqaddam al-Qabri was told.

“… One day, the favourite poet of Abd-er-Rahman III, the singer dear to the people, was rummaging about the souk in Córdoba. There he bumped into a girl with very beautiful eyes named Zaynad, but those beautiful glaucous eyes had no vision. Zaynad was blind. Muqaddam fell madly in love with her. Such was the love al-Qabri felt for Zaynad that he decided to share blindness with her, and he tore his eyes with an awl. The poet of the cora (province) of Cabra, the minstrel of the muwashshah turned blind to real life so as to be born into interior vision…”

Texts also included some verses from the poet: 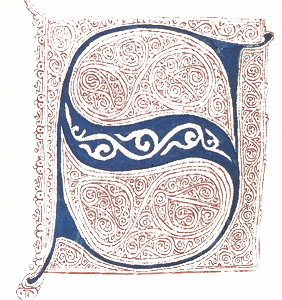 he was so beautiful

That if moon had been asked

̶ What do you want moon?

The moon would have replied

̶ A twinkle of her