Beyond the pillars of Hercules

“Where the Mediterranean and the Atlantic Ocean meet are found the lighthouses of stone and bronze built by Hercules, the great king. They are covered with inscriptions and surmounted by statues, which point as if to say:

There is no way beyond me; beyond me there is no passage for those who enter the Atlantic Ocean from the Mediterranean. No ship can enter the ocean. It contains no inhabited land and no rational animals dwell there. Where it begins and where it ends are both unknown. It is the Sea of Shadmus, The Green Sea, the Circumambient Ocean. “

For the Latin Middle Ages, the Atlantic was Mare Tenebrosum; for the Arabs, Bahr al-Zulamat. Both meant “The Sea of Darkness,” and anyone who has looked west from the northern coast of Portugal and seen the heavy cloud banks lying across the horizon will admit the name is well-suited to the Atlantic. It was ill-omened: for Christians, the word tenebrosum suggested evil and evoked the Prince of Darkness, which indicates medieval man’s fear and ignorance of the Atlantic Ocean. But the ocean had other, more propitious names as well. Two of these, “The Green Sea” and “The Circumambient Ocean,” appear in the passage just quoted from the famous 10th-century Arab historian and geographer al-Mas’udi, whose works are full of fascinating geographical information. The Arabs used other names also, such as the scholarly Uqiyanus, directly transliterated from the Greek word okeanos, and even, in later sources from the western Islamic world, Bahr al-Atlasi, “The Sea of the Atlas Mountains”, an exact rendering of the word “Atlantic.” 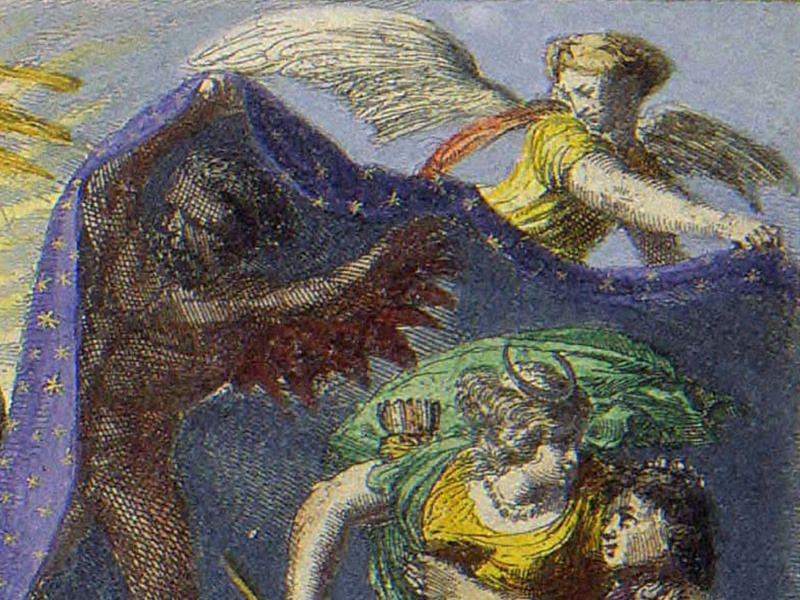 But the most frequent Arabic name for the Atlantic was al-Bahr al-Muhit, “the Circumambient”, or “All-Encompassing Ocean”. This name embodied a very ancient notion. The Babylonians, and perhaps the Sumerians before them, envisaged the inhabited portion of the world as an upturned boat, a gufa, floating in the sea. This old Sumerian word was used to describe the round-bottomed reed boats used in the marshes of southern Iraq, where they are still known by the same name. Name and concept have proved to be extraordinarily persistent. The idea passed from Babylonia to the Greeks, and geographers from Herodotus and Hecataeus described the world as surrounded on all sides by a universal ocean, even when the limits of the known world had been expanded far beyond anything the Babylonians could have imagined. 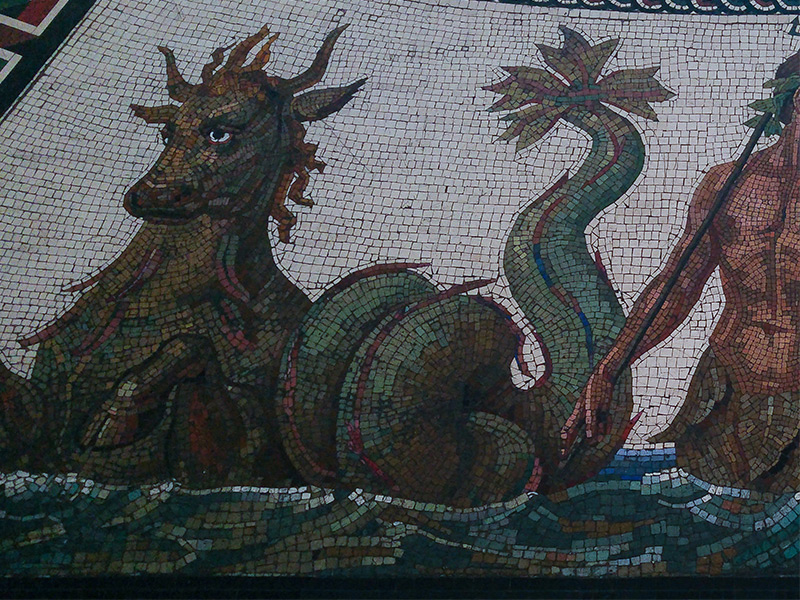 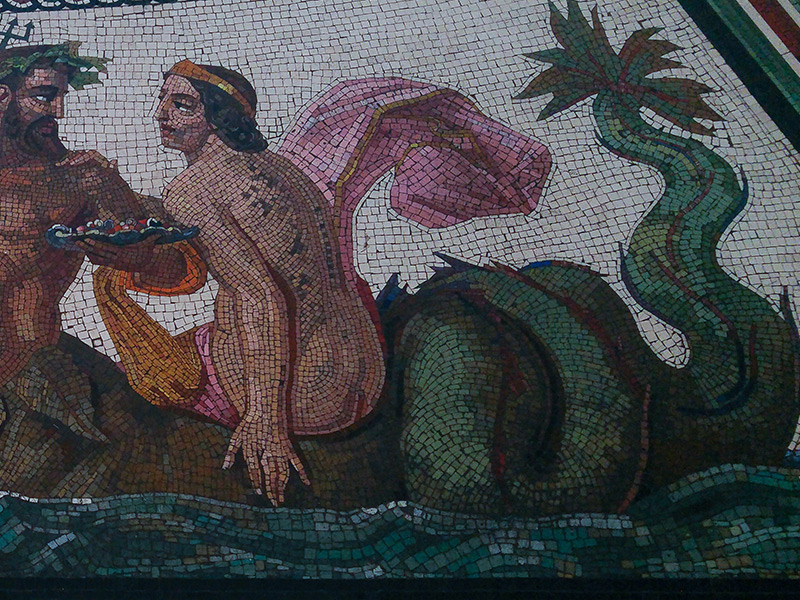 A close-up view of the Babylonian map of the World. This partially broken clay tablet contains both cuneiform inscriptions and a unique map of the Mesopotamian world. Probably from Sippar, Mesopotamia, Iraq. 700-500 BCE. The British Museum, London.

The Babylonians had little knowledge of lands beyond Mesopotamia and its immediate surroundings. Their image of the world was rooted in their cosmology, rather than based on observation. That the Babylonians proved to be correct, in the sense that all the great bodies of water that encircle the globe are interconnected, is fortuitous. Yet it was this idea, passed on to the Greeks, then through the Arabs to medieval Europe, that contributed to the geographical discoveries of the 15th and 16th centuries.

Hernando Columbus, in his biography of his father Christopher, lists the classical and medieval sources that led the admiral to think he could reach the Indies by sailing westward. One of the most important of these sources was Aristotle’s De Caelo (On the Heavens), a book known in Arabic translation since the 9th century and often quoted by al-Mas’udi. The original Greek text reached Italy in the 15th century, after the fall of Constantinople in 1453, but was not printed until after the discovery of America. It had been known in Spain, however, since the 12th century through a commentary on it by Ibn Rushd of Córdoba, the Averroes of the Latin Middle Ages. Whether Columbus knew De Caelo through Latin translations of Averroes or more directly through the new Renaissance translations by Italian humanists with whom he was in contact, is unknown. In any case, here is the passage that fired his imagination: 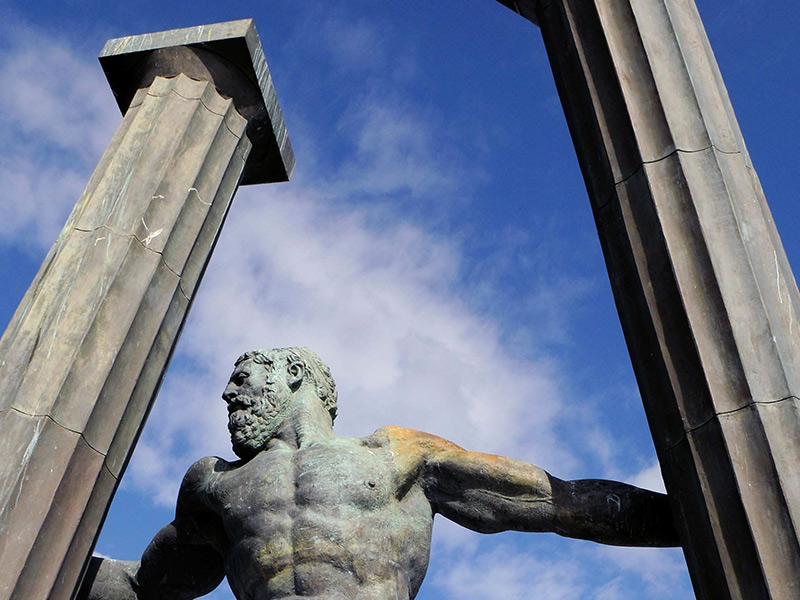 The sculpture named: “The two columns of Hercules: Abyla and Calpe” is located in the Strait of Gibraltar, in the city of Ceuta.

Leaving aside Aristotle’s estimate of the earth’s circumference, which is about twice too large, it is easy to see why Columbus seized upon this passage. Aristotle, the supreme authority for the Middle Ages, suggests that Asia may stretch right around the globe, perhaps joining Africa, or at least that both are washed by the same sea. Hence one could easily reach Asia by setting off westward, across the all-encompassing sea.

This, at least, was the theory. It was buttressed by many more classical references, as well as by medieval legends of islands to the west and even by odd sightings of worked wood cast up on the beaches of the Atlantic islands. But still to be overcome was a tremendous psychological barrier, the ancient belief that nothing lay beyond the Pillars of Hercules. This belief was enshrined in the motto ne plus ultra, “there is nothing beyond,” a phrase echoed in al-Mas’udi’s account of the statues “which point as if to say: ‘There is no way beyond me…'”

For the classical world, the Columnae Herculis, the Pillars of Hercules, were not actual pillars ̶ or light­houses ̶ but two mountainous points on either side of the Strait of Gibraltar, Calpe and Abyla. 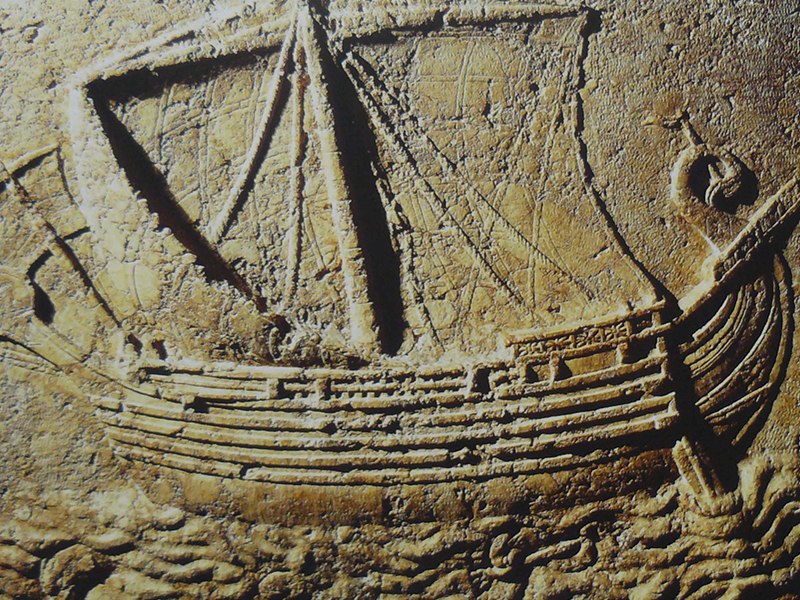 Image of a 2nd century Phoenician ship, sculpted on a sarcophagus. 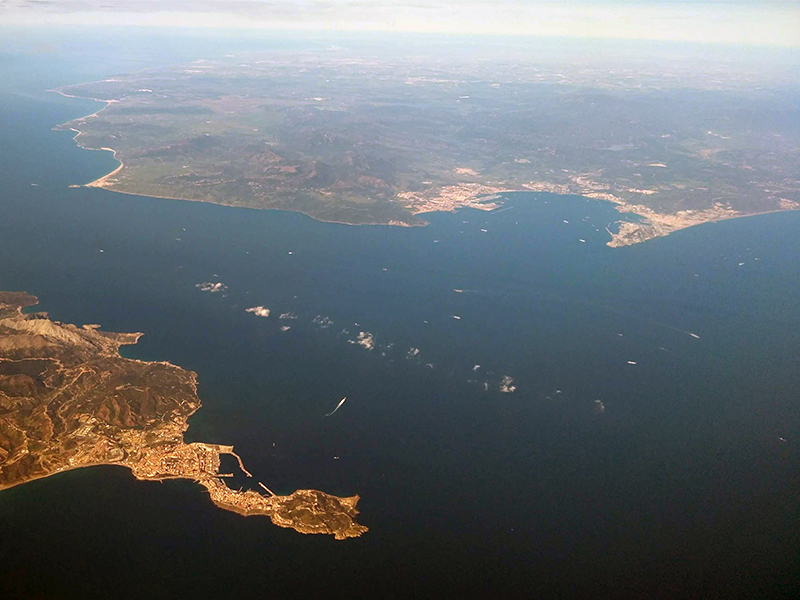 The Phoenicians sailed through the Pillars of Hercules around 1100 BC and founded their first Atlantic port, Gadir (“Fortified Place”) where the city of Cádiz now stands. Somewhere in the hinterland lay the fabulous region  ̶ or perhaps city ̶  known to the classical world as Tartessos and in the Bible as Tarshish. The Phoenicians established a rich trade with the eastern Mediterranean world in gold and silver from the rich mines of Tartessos. They also opened an Atlantic sea-route to the Cassiterides, the “Tin Islands,” probably somewhere in Britain, and to the Baltic, where they traded for amber. Tin was a vital component in the making of bronze; amber was used for ornament. The Phoenicians had a virtual monopoly of both, and they jealously guarded it, sinking any rival ships that ventured into the western Mediterranean. They regarded their trade routes as state secrets, and classical sources cite at least one Phoenician trading vessel that ran aground rather than let a rival learn its course.

The Phoenicians and their successors, the Carthaginians, established trading colonies along the coast of north and west Africa. Anticipating Portugal’s Prince Henry the Navigator by some 2.000 years, they also made a number of efforts to circumnavigate Africa. One of these, sponsored by the Egyptian Pharaoh Necho II, took place about 600 BC. Herodotus, who calls Africa “Libya” and the Red Sea “the Arabian Gulf,” is our only source of information about this voyage.

The Phoenician circumnavigators of Africa were practical seamen unhampered by theory. The Carthaginians, as the Phoenician colonists in the western Mediterranean came to be known, must have been aware of their compatriots’ clockwise circumnavigation of Africa. Sometime before 480 BC, the Carthaginians sent a large expedition of their own, under a leader called Hanno, in the opposite direction. A Greek version of the original Punic account of this voyage makes it clear that Hanno reached a long way south, past the volcanic mountain he called “The Chariot of the Gods”  ̶ probably the 998- meter-high (3.273-foot), Mt. Kakoulima in present -day Guinea ̶  and as far as Sierra Leone. On the way he discovered both the Canary and Cape Verde Islands, so important later as staging points for trans-Atlantic voyages. The Cape Verde Islands were not rediscovered until 1455, nearly two thousand years later. 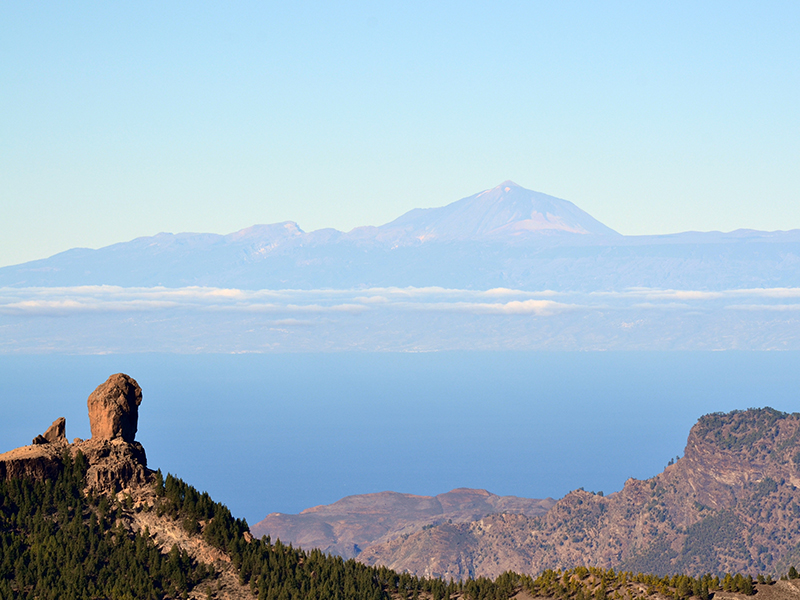 A view of the Teide mount from the island of Gran Canaria. 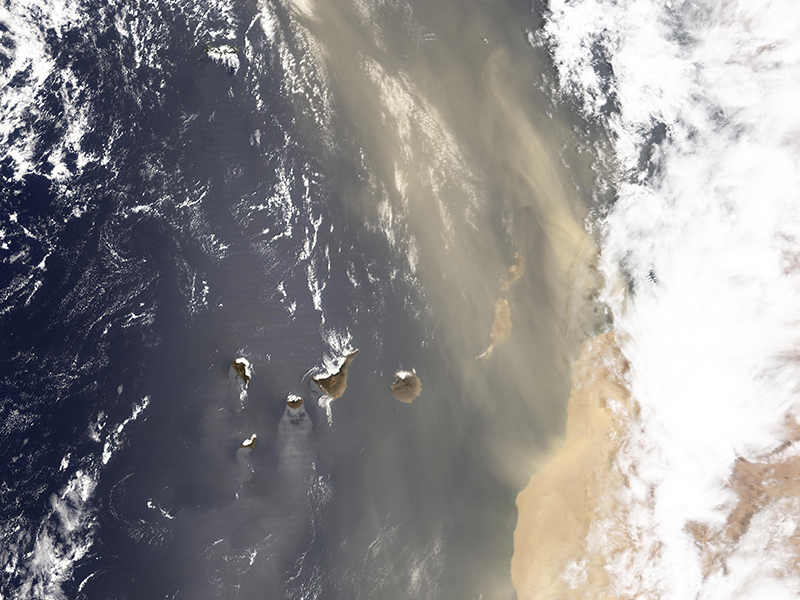 The Canary Islands under a cloud of Saharan dust.

The Canaries are a classic example of how ancient discoveries were made and then lost. Discovered by Hanno in the 5th century BC, they were explored and colonized in 25 BC by Juba II, erudite king of Mauretania and husband of Cleopatra Selene, daughter of Antony and Cleopatra. A passionate art collector, Juba was also interested in science and technology, inventing a new method of making purple dye from the orchil plant, whose export from the Atlantic islands was of economic importance until early this century. Juba populated the Canaries with Berber-speaking colonists, perhaps the ancestors of the Guanches. Gradually, knowledge of the location of the Canaries was lost, even though Lanzarote, the island nearest the North African coast, lies less than 100 kilometres (60 miles) west of the mainland. The Greeks called the Canary Islands Tōn Makarōn Nēsoi, “The Islands of the Blessed,” and they were regarded as the furthest known land to the west. Ptolemy drew his 0° longitude line, or prime meridian, through the Canaries; the French continued to do so until the 19th century.

The Canary Islands were rediscovered in the 13th century by a French or Genoese ship blown off course. In 1402 the Normans partially conquered them, meeting stiff resistance from the indigenous Guanches. In the mid-15th century, the Spanish took control of the Canaries and continued the conquest. Fighting was still going on when Columbus used the islands as the first stop on all four of his voyages to the Caribbean. The Guanches were not finally subdued until the end of the 16th century, when they and their language virtually disappeared. From the few words of Guanche preserved in the Spanish chronicles, we know they spoke a form of Berber, and were therefore probably descendants from Juba’s colonists. Yet when Europeans encountered them, they had no memory of the mainland; having no boats, they were unaware that the other islands in the group were inhabited.